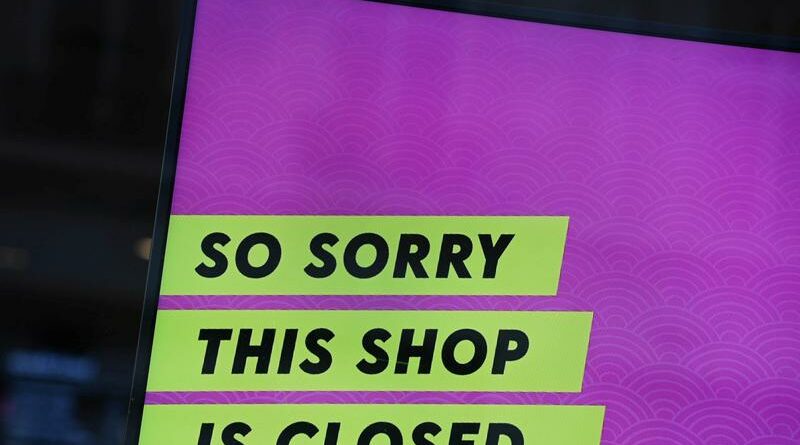 FILE PHOTO: A closed sign is seen in a shop, as official figures are published for UK GDP in 2020, London, Britain, February 12, 2021. REUTERS/Toby Melville

Retail sales volumes slumped by 8.2% compared with December, a far bigger fall than the 2.5% decrease forecast in a Reuters poll of economists and the second largest on record.

“The only good thing about the current lockdown is that it’s no way near as bad for the economy as the first one,” Paul Dales, an economist at Capital Economics, said.

The Office for National Statistics said the smaller fall in retail sales last month compared with an 18% plunge last April, and reflected a boom in online services such as click-and-collect.

The ONS also said public sector borrowing of 8.8 billion pounds ($12.3 billion) was the first January deficit in a decade, but the deficit was a lot less than a forecast of 24.5 billion pounds in the Reuters poll.

He is expected to extend the government’s wages subsidies, at least for the hardest-hit sectors of the economy, in his budget statement on March 3.

Sunak said he had been able to increase spending because the public finances had been in good shape before the crisis.

“Therefore, it’s right that once our economy begins to recover, we should look to return the public finances to a more sustainable footing and I’ll always be honest with the British people about how we will do this,” he said on Friday.

Britain’s economy – which had its biggest slump in 300 years in 2020 when it shrank by 10% – is set to contract by 4% in the first three months of 2021 before recovering later in the year, according to the Bank of England.

Prime Minister Boris Johnson has said he will lift the lockdown in England only gradually, even as Britain outpaces the rest of Europe with its COVID-19 vaccinations.

A survey showed consumers were their most confident since the COVID-19 pandemic struck.

“The hope, and our expectation, is that when the lockdown is finally lifted, we will see a surge in consumer spending, rather than a more permanent scarring of the consumer confidence,” James Sproule, an economist at Handelsbanken, said.

Retail sales in January were down 5.9% compared with the same month in 2020.

Department stores and clothing stores saw the sharpest fall last month while online shopping rose to its highest ever share of total spending at 35.2%.

On the public finances, the ONS said central government tax receipts were down less than 1 billion pounds compared with January last year, helped by higher self-assessed tax receipts that typically flood in during the first month of the year.

It also said there was a 300 million-pound revenue boost from customs duties, which until last month went to the European Union, and for the first time Britain paid no contribution to the EU budget which used to average 1 billion pounds a month.

Covid-Loss Case by Restaurant Is First U.S. Test for Insurers