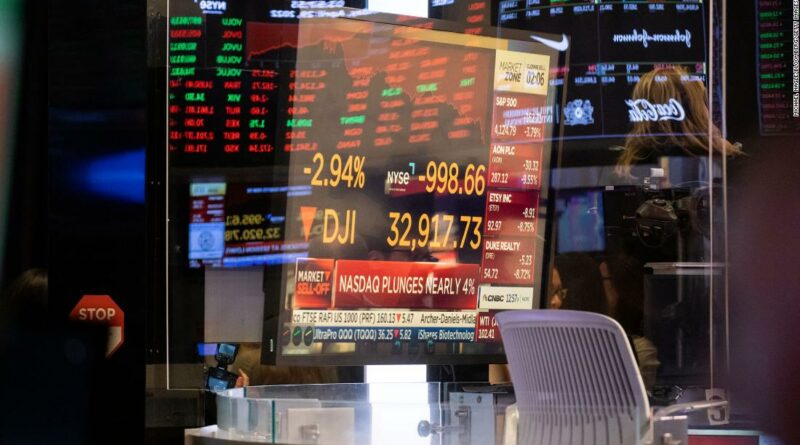 London (CNN Business)As the economy began bouncing back from the coronavirus pandemic, interest in investment products that promoted good environmental, social and governance practices took off.

But as markets have come under pressure this year, so-called “ESG” funds have started to struggle.
What’s happening: Funds that prioritize responsible investments and ESG issues experienced net outflows of more than $39 billion in February and March, according to data from Refinitiv Lipper provided exclusively to Before the Bell.

These funds hadn’t lost more money than they brought in since March 2020, when the market crashed due to the onset of Covid-19.

Breaking it down: Fund managers haven’t suddenly stopped caring about corporate values. Instead, the fate of these funds has been tied to what’s happening in financial markets more broadly.

ESG funds often favor fast-growing companies and technology names, Bob Jenkins, head of research at Refinitiv Lipper, told me.
These firms have stumbled this year, as investors — assessing the impact of rising interest rates, a slowing economic recovery and the outbreak of the war in Ukraine in February — moved their money into bets on companies that are seen as undervalued or less risky. That’s meant that ESG funds, which own lots of shares of these companies, have stumbled, too.

“ESG funds have a heavy exposure to tech and growth stocks — more so than the market as a whole,” Jenkins said. So, when there’s a rotation away from these types of shares, “we can expect to see both the broader market and, to a slightly stronger extent, ESG funds, trend down.”
Take the iShares ESG Aware MSCI USA ETF, a popular exchange-traded fund that has more than $23 billion in net assets. Its top holdings include Apple (AAPL), Microsoft (MSFT), Amazon, Tesla (TSLA) and Google’s Alphabet (GOOGL) — all stocks whose performance has been rocky this year as investors reassess whether it’s time to pivot away.
Investor insight: Jenkins doesn’t expect a big bounce for the ESG sector any time soon. The Nasdaq Composite finished April 13% lower, marking its worst month since October 2008. The S&P 500 fell 8.8%, its biggest monthly drop since March 2020.
“Here in the early part of [the second quarter], we’ve seen a return to selling … once again plaguing the growth and tech names so prevalent in ESG funds,” he said.
Big picture: ESG investing is still huge. Global assets under management that met Refinitiv Lipper’s ESG criteria stood at just over $7 trillion at the end of the first quarter. But for the first time in two years, some of the wind has come out of the sails of these funds. More difficult months could be ahead.

Amazon’s first quarterly loss since 2015 — which sent the company’s shares down 14% on Friday — marked the rough midpoint of a tumultuous earnings season, as companies dealt with elevated costs and consumers worried about the highest inflation in four decades.
Checking in: Earnings for the first three months of the year are on track to have grown by 7.1%, according to a FactSet analysis. That means the S&P 500 could be due for its weakest earnings growth since late 2020.
Amazon’s big miss definitely didn’t help. FactSet found that the company was the single biggest contributor to the drag on earnings growth for the S&P 500 so far. If the data provider excluded the company from its calculations, earnings growth would actually be pacing closer to 10%.
The problems Amazon (AMZN) faced are indicative of broader points of weakness as companies share first quarter results.
The company faced tough comparisons to one year ago. As the recovery from the pandemic was gaining steam, Amazon earned $8.1 billion profit in the first three months of 2021. Earnings-per-share were the second highest on record.
The global economy slowed down significantly in the first three months of 2022, however, as the war in Ukraine exacerbated supply chain challenges and fresh coronavirus lockdowns in China clouded the outlook.
As the war drives up the price of fuel, companies are also getting worried about whether consumer spending can stay strong, weighing on their guidance for future quarters.
“There’s no indicators that we’re seeing of weakness in consumer demand, but we’re wary of it — as probably all companies are — because household budgets are tightened when fuel costs are doubling,” Amazon’s Chief Financial Officer Brian Olsavsky told analysts last week.
Coming up: About 55% of companies in the S&P 500 have reported their results. This week, big releases to watch include Pfizer, Starbucks and CVS.

The biggest economies in the world are going through the toughest patch since the pandemic broke out, boosting the once-slim probability that a recession could be just around the corner.
America’s economy unexpectedly shrank in the first quarter of 2022, surprising forecasters and raising alarms that the Federal Reserve’s plans to pull back economic support to fight inflation could make matters worse.
Consumer spending is holding up for now. Most of the decline came from a drop in inventory investment, as companies spent less money to keep shelves stocked. But economists are increasingly worried about what happens next year, when the Federal Reserve’s aggressive (if belated) approach to tackling price increases will really start to bite.
Meanwhile, Covid lockdowns have taken a heavy toll on China. The latest government survey data, released over the weekend, shows activity across manufacturing and services slumping to its lowest level since February 2020.
And data published Friday showed that the European economy slowed in the first three months of the year due to a combination of soaring inflation and early fallout from the war in Ukraine.
The takeaway: Europe and China could create major problems for the global economy this year, while the outlook for the United States is looking increasingly uncertain as we head into 2023. Recession chatter isn’t going anywhere.