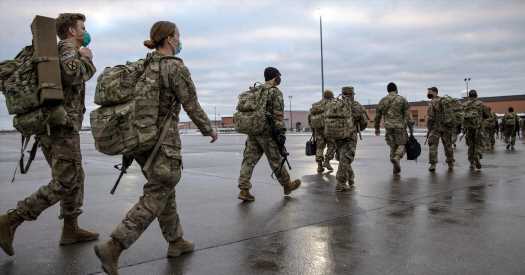 Since 2016, women have been allowed to serve in every role in the military, including ground combat. Unlike men, though, they are not required to register with the Selective Service System, the government agency that maintains a database of Americans who would be eligible for the draft were it reinstated.

Almost all other sex-based distinctions in federal law have been eliminated, in no small part because of the pioneering work of Ruth Bader Ginsburg, who litigated women’s rights cases in the Supreme Court before she joined it.

But the requirement that only men must register for the draft remains. The Supreme Court will soon decide whether to hear a challenge to the requirement, in language that could have been drafted by Justice Ginsburg when she ran the Women’s Rights Project at the American Civil Liberties Union.

“It imposes selective burdens on men, reinforces the notion that women are not full and equal citizens, and perpetuates stereotypes about men’s and women’s capabilities,” lawyers with the A.C.L.U. wrote in a petition on behalf of two men who were required to register and the National Coalition for Men.

Justice Ginsburg, who died in September, argued six cases in the Supreme Court. In the first, Frontiero v. Richardson in 1973, she persuaded the court that the Air Force’s unequal treatment of the husbands of female officers, who were denied housing and medical benefits, violated equal protection principles.

But the challengers in the new case must reckon with another precedent. In 1981, in Rostker v. Goldberg, the Supreme Court rejected a sex-discrimination challenge to the registration requirement, reasoning that it was justified because women could not at that time serve in combat.

In 2019, Judge Gray H. Miller, of the Federal District Court in Houston, ruled that since women can now serve in combat, the men-only registration requirement was no longer justified. A unanimous three-judge panel of the United States Court of Appeals for the Fifth Circuit, in New Orleans, agreed — but it said that only the Supreme Court could overrule its own precedent.

The Trump administration defended differing registration requirements in the appeals court. The Biden administration has twice sought extra time, and its brief is now due on April 14.

The government has not drafted anyone since the Vietnam War, and there is no reason to think that will change. The challengers say that is a reason for the court to act now, before a crisis arises.