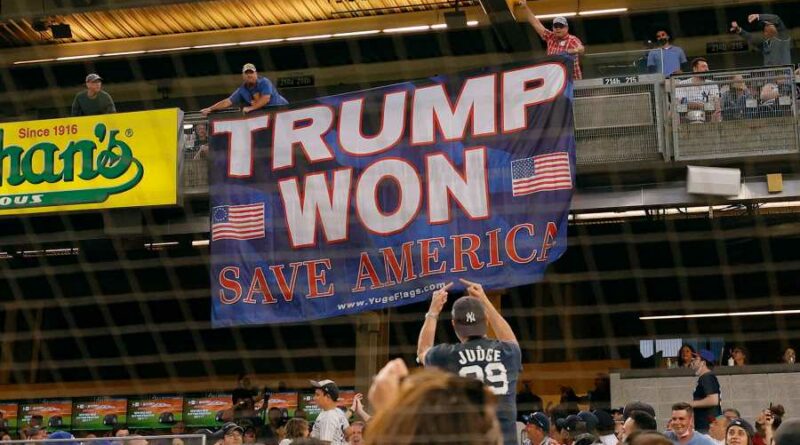 A full 29 percent of Republicans think Donald Trump has a real shot at being “reinstated” as president by the end of 2021, according to a new Morning Consult/Politico poll. A full 17 percent of GOP respondents said its “very likely” that Trump, who lost the electoral college to Joe Biden by a 306-232 margin, will once again be president. Another 12 percent said it’s “somewhat likely” that Trump will get back in the oval office this year.

They’re all wrong. It is “extremely unlikely” — as 39 percent of Republican respondents and correctly told the pollsters — that Trump is coming back to the White House in 2021. Trump got thumped in the 2020 election, a reality that has been upheld dozens of times in various courts.

'We're Gonna Murder You and Then Them': New Report Details January 6 Security Failures

The Beatles in India: 16 Things You Didn't Know

But the roots of this delusion aren’t super difficult to discern. One of the central tenants of the QAnon conspiracy alt-universe is that Trump will at some point use martial law to suddenly consolidate polical power and jail his rivals in the “deep state.” Powerful people are fueling that belief. Trump’s former National Security Adviser, the QAnon-espousing Michael Flynn, openly pined for a military coup last week, and Trump himself is pouring rocket fuel on the fire as he has reportedly been raving about how he’ll be back in office by August. And even those not taken in by the Q lunacy may be misled by the various grifters who are promising their election “recounts” are keeping Trump’s hopes alive.

For now, a military coup is (blessedly) unlikely, but the reinstatement fantasy is a segment of a broader brainworm that’s embedded in the Republican zeitgeist: that Trump is still the legitimate president because he was the real winner of the 2020 election. And among GOP voters, that’s far from a fringe position. A full 60 percent of Republican voters told Reuters/Ipsos pollsters in May they at least somewhat agreed that Trump had the election stolen from him.

The consequences of this broad insanity were made plain during the January insurrection, when Trump supporters violently tried to stop the certification of Biden’s victory. The insurrection failed, but other anti-democratic efforts are moving forward, including GOP-dominated state legislatures weaponizing lies about the the 2020 election to pass laws making it harder to vote.

It’s not clear that these lawmakers really need the excuse. Using the fig leaf of “voter fraud” to restrict voting rights was part of the GOP electoral strategy long before Trump took the party’s reins. And getting Republicans to start trying to win over a majority of voters (rather than just disenfranchising them en masse) will require more than getting them to drop Trump’s personal fan-fiction about the future.

But so long as Republicans believe the last presidential election was stolen, it’s going to be much harder to convince them to stop trying to cheat in the next one.