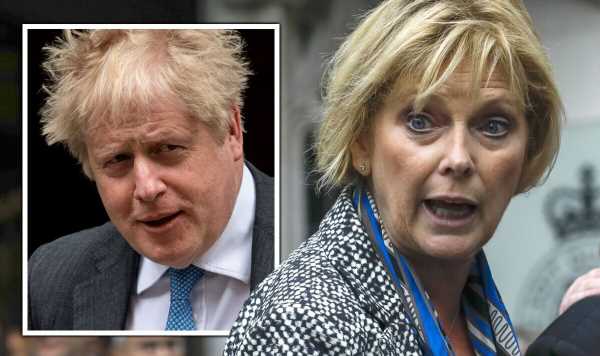 Former Conservative MP Anna Soubry has hit out at the “conspiracy of silence” and “changes” in the Tory party post-Brexit. Her comments were triggered by one of Britain’s most experienced retail chiefs claiming he was “not allowed” to mention Brexit. Speaking to BBC One, ASDA chairman Lord Stuart Rose reportedly admitted he “was not allowed to mention Brexit” in his analysis of the state of the British economy.

Lord Rose, who previously headed up Marks & Spencer and chaired Ocado, has been critical of the Bank of England and the Government for being too slow to react to inflation and the cost of living crisis.

Writing on Twitter, Ms Soubry said: “History will record the great conspiracy of silence – the complete shutting down of debate post-Brexit.

“It results in the Chair of Asda Stuart Rose actually admitting in his analysis of the state of our economy (BBC1 this morning) he’s not allowed to mention Brexit.

“The leaders of the Brexit campaign promised so much but they are not being held to account on why so little (if anything) has been delivered.

“No one seems even to question what harm Brexit is causing our economy.”

Ms Soubry, who left the Conservative party in 2019 to join Change UK, is a vocal supporter of pro-European policies.

Her comments come despite Prime Minister Boris Johnson saying Britain had the “fastest-growing economy” in the G7 after the latest GDP data was released.

The data for GDP – the most comprehensive measure of a nation’s economy – was published by the Bureau of Economic Analysis.

GDP grew 6.8 percent during that time, according to data from the Organisation for Economic Co-operation and Development (OECD).

Another impressive figure released by the Government in February showed that the UK economy grew 7.5 percent in 2021.

This was the fastest rise since the Office for National Statistics records began in 1948.

In addition to causing harm to the economy, she claims Brexit has also had a negative impact on the Conservative party.

Ms Soubry continued: “There’s silence too on the political fallout of Brexit.

“The Conservative party’s shifted to the right – a happy home for ideological nationalists.

“Many genuine One Nation Tories have left. A significant number of hugely able, moderate Conservative women MPs have left Parliament.

“There’s a link between the debauched culture that’s prevalent in Parliament and the morally bankrupt character of Boris Johnson, the changes he’s encouraged in his party and the wholly dishonest Brexit campaign he led.

“It’s time political leaders stopped the conspiracy of silence about the damage Brexit has done to our country.

“Time they spoke truth to power and restored decency and competence in Parliament and politics in general.”

Her comments come at a challenging time for the Conservative Party which has been rocked by successive scandals since the new year including ‘partygate’ and the renewed ‘me too’ movement in Westminster.

MP for Tiverton and Honiton, Neil Parish, was forced to resign over the weekend after admitting he accessed pornography twice while in the House of Commons.

Meanwhile, the Sunday Times reported 56 MPs are currently under investigation for sexual misconduct by Parliament’s Independent Complaints and Grievances System, including three cabinet ministers and two members of the shadow cabinet.

George Floyd's family meets with Biden, Harris on the first anniversary of his murder