Home » World News » With Ramadan over, families and non-Muslim friends get together 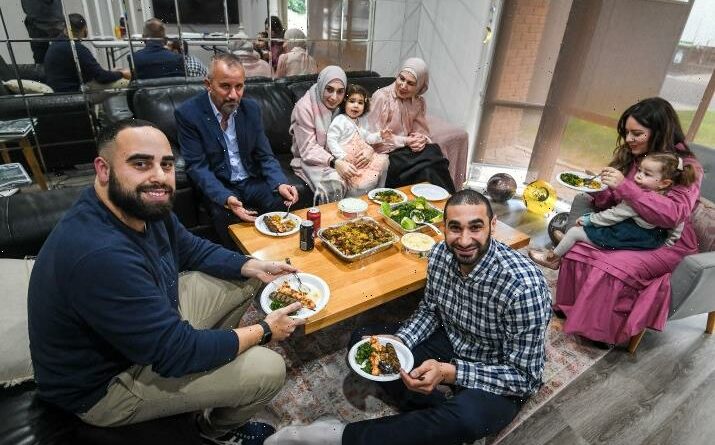 In his sermon to 1500 worshippers to mark the end of the Muslim holy month of Ramadan on Monday morning, Imam Alaa Elzokm stressed the importance of fostering relations between Muslims and “their non-Muslim brothers and sisters”.

In the afternoon, he practised what he’d preached. 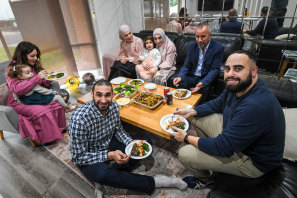 Adnan Hanna, on rear couch at right, visits his neighbour, Imam Alaa Elzokm (front, in check shirt) and his family for an Eid al-Fitr meal in Roxburgh Park on Monday.Credit:Justin McManus

Imam Elzokm and his wife Rheme El-Hussein celebrated the Muslim religious holiday of Eid al-Fitr with a meal not just with their own family, but with a Christian friend from next door.

At the start of Ramadan early last month, Adnan Hanna, an Assyrian Orthodox Christian from Iraq, had visited the Elzokm family with a box of dates to break the daily fast at night, and wished them Ramadan Mubarak (a blessed Ramadan).

On Monday, Hanna ate a meal of Lebanese food – joining Elzokm and his wife and five relatives, including the Elzokms’ daughter Ayah, 22 months, and niece Lara, 2.

Many Australian Muslims took the day off work, prayed in mosques and broke their 30 days of fasting by eating and exchanging gifts with loved ones. 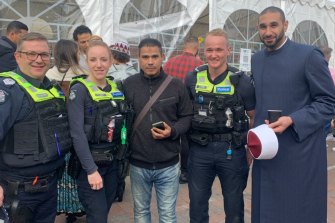 Elzokm, an Egyptian immigrant, said local police and an Egyptian Orthodox Christian priest joined Muslims at Eid prayers and a community breakfast at his Elsedeaq Mosque in Heidelberg Heights on Monday.

Elzokm said Eid was a celebration “after 30 days of worshipping God” and he included “our non-Muslim brothers and sisters” in the festivities.

In his sermon at the mosque, he reminded worshippers about being good Muslim Australians by being of good character, including caring for their country, their religion and for the community and by participating in elections.

He advised them to call or visit relatives and take care of the poor and needy, here and abroad. 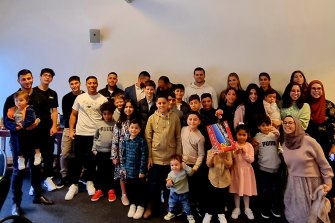 Younger members of the Fahour family at their Eid al-Fitr breakfast at the Islamic Museum of Australia.Credit:Moustafa Fahour

Moustafa Fahour, chair of the building committee of Preston mosque, said about 5000 people attended Eid prayers on Monday, inside and outside the building, which has just undergone a $6.5 million renovation.

Fahour said 50 members of his own family, aged six months to 86, later celebrated their Eid breakfast at the Islamic Museum of Australia, which he founded, in Thornbury.

Fahour said the meal kicked off a week of “connecting with family”. He said fasting for 30 days during Ramadan was a sacrifice reminding Muslims to be humble, patient, to pray and to give to others.

There will be Eid al-Fitr festivals across Melbourne in coming weeks, including one at Preston Mosque from 10am to 4pm on Sunday that will feature food stalls and rides.

Queen Victoria Market will mark Eid this Saturday and Sunday with traditional food and dance.

Cut through the noise of the federal election campaign with news, views and expert analysis from Jacqueline Maley. Sign up to our Australia Votes 2022 newsletter here.