The Biden administration formally ended the Trump-era “Remain in Mexico” program, which had forced tens of thousands of Central American asylum-seekers to wait in Mexico in often dangerous conditions for their claims to be processed.

In a memo Tuesday, Department of Homeland Security Secretary Alejandro Mayorkas terminated the program, also known as Migrant Protection Protocols (MPP), after the Biden administration paused it earlier this year for a review.

In January, the Biden administration suspended any new enrollments of asylum-seekers into the program and since February has processed over 11,000 people previously enrolled into the U.S., according to Mayorkas’ memo.

Since the Trump administration issued the policy in January 2019, about 68,000 asylum-seekers were forced to wait in Mexico for their U.S. court cases, many in dangerous situations where they faced violence, sexual assault, kidnapping and more.

“This is a huge victory. The forced return policy was cruel, depraved, and illegal, and we are glad that it has finally been rescinded,” American Civil Liberties Union attorney Judy Rabinovitz said in a statement.

Rabinovitz, who led the ACLU team that previously sued the Trump administration over the policy, urged the Biden administration to ensure “everyone who has been subjected to this policy can now pursue their asylum cases in the United States, in safety and without additional trauma or delay.”

In the DHS memo, Mayorkas wrote that after Biden directed him to review the program in February, he’d considered whether it processed asylum-seekers “ in a safe and orderly manner consistent with the Nation’s highest values.” The DHS secretary noted that some of those forced to remain in Mexico faced a “lack of stable access to housing, income, and safety.”

A 2019 report from Doctors Without Borders condemned the Trump-era policy for leaving people to stay “in violent areas of Mexico and [putting] them in extreme danger.” Of the nearly 400 patients the group treated in the Mexican border city of Nuevo Laredo in the first five months of that year, more than 45% had endured at least one episode of violence as they waited to cross into the U.S., including about 12% who had been kidnapped.

A separate report from Human Rights Watch detailed how in Ciudad Juárez, Central American migrants reported facing sexual assault, homelessness, kidnapping and other violence after being sent to the Mexican city under the policy.

“We applaud the Biden Administration’s decision to formally end the abhorrent ‘Remain in Mexico’ policy,” said Reps. Bennie Thompson (D-Miss.), chair of the House Committee on Homeland Security, and Nanette Diaz Barragán (D-Calif.), chair of the subcommittee on border security, in a statement calling the policy “a stain on our nation’s history.” 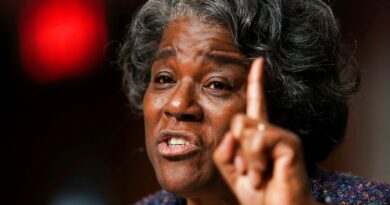