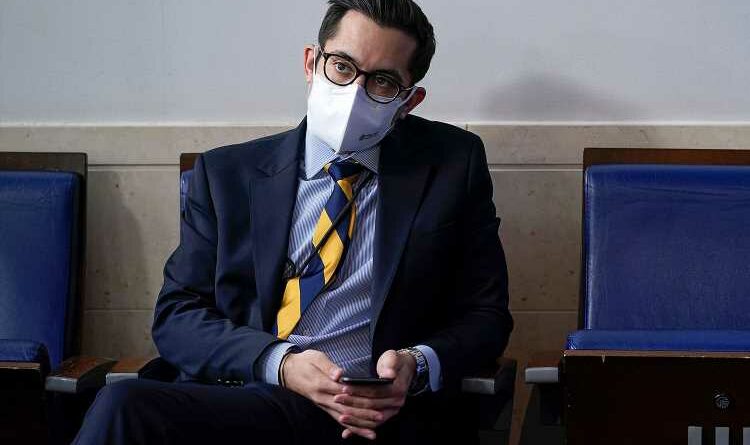 A White House aide was suspended on Friday not long after it was revealed that he had threatened and demeaned a female reporter last month while she was preparing a story about him.

Citing sources, Vanity Fair reported that Deputy Press Secretary TJ Ducklo "lashed out" at Politico's Tara Palmeri on Inauguration Day after learning Politico was aware he was dating a journalist for the website Axios.

While Ducklo and the other journalist, Alexi McCammond, say they had previously disclosed the relationship to their bosses and made ethical considerations such as McCammond adjusting her beat, their romance was not publicly known.

Politico was pursuing it in part because of the possible conflicts it raised, according to Vanity Fair.

Palmeri reached out to McCammond for comment, Vanity Fair reported, but it was Ducklo who got back to her.

Sources told Vanity Fair that Ducklo warned Palmeri "I will destroy you" and specifically threatened her reputation.

He also "made derogatory and misogynistic comments," according to Vanity Fair, such as claiming Palmeri was looking into the issue out of jealousy at the romance and because an unnamed other man had "wanted to f—" McCammond, not Palmeri.

Ducklo subsequently emailed to apologize to Palmeri, "stating that he was sorry he lost his cool, but he did not delve into any specifics or apologize for threatening and sexually harassing the reporter," Vanity Fair reported.

His relationship with McCammond, meanwhile, became public on Monday when the couple talked to PEOPLE.

Politico published its own item on them as well this week.

Vanity Fair's story on Friday morning was a previously undisclosed chapter in the saga — prompting criticism of the White House in large part because President Joe Biden and his aides made a point of how they would behave.

"If you're ever working with me and I hear you treat another colleague with disrespect, talk down to someone, I promise you I will fire you on the spot," Biden told some of his staff in a public swearing-in on Inauguration Day.

The White House announced on Friday that Ducklo was being suspended for one week without pay and had both apologized to Palmeri and sent her "a personal note expressing his profound regret."

The White House said Ducklo would not be working with Politico moving forward — an unusual arrangement that drew its own criticism from some reporters.

During the regular press briefing on Friday afternoon, Psaki was pressed by reporters about Ducklo's conduct and about the White House's response both in light of Biden's previous comment and because officials took action only after Vanity Fair's report rather than after learning of his conduct last month.

Psaki reiterated that Ducklo's behavior was "unacceptable." She did not dispute Vanity Fair's account of what happened.

"I take this very seriously," she said, adding, "He's the first to acknowledge this is not the standard of behavior set out by the president nor is it the standard set by me and I am his direct supervisor."

"He had a heated conversation related to his personal life. I'm not saying that's acceptable," Psaki said. "But I just want to be clear that it was not about an issue related to the White House or a White House policy or anything along those lines."

Asked about the decision to reprimand Ducklo only after Vanity Fair's article, Psaki said officials originally believed it was best to handle the matter privately with Politico.

In the days between Ducklo's romance with McCammond being revealed and Vanity Fair's reporting, Psaki and other White House officials spoke glowingly of the coupling, on social media and elsewhere. After the article on Friday, they conceded how Ducklo had behaved last month.

Psaki described Ducklo's suspension as a "significant step" and said she made the decision to discipline him with the chief of staff's approval but did not talk with the president.

"We don't want, no one wants, anyone to feel uncomfortable [or] to be put in an uncomfortable position and that's not behavior we will tolerate," Psaki said at the briefing.

She went on: "It's completely unacceptable, he knows that. We've had conversations with him about that."

She said the White House had also apologized to Politico "and been clear this will never happen again and it is not going to be tolerated here at the White House."

Ducklo did not respond to a request for comment; neither did Palmeri or Politico spokespeople. 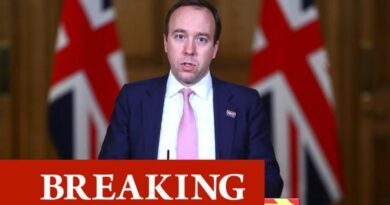