SURFSIDE, Fla. (AP) — President Joe Biden on Thursday offered comfort to the grieving and federal support for the ongoing efforts to search for the missing and rebuild after last week’s collapse of a high-rise condo building along the Florida coastline.

Biden, responding to what appeared to be the deadliest calamity of his young presidency, also met with first responders hunting for survivors among the rubble in Surfside. But underscoring the dangers still present in the search, work was halted before Biden arrived due to concerns about the stability of the section still standing.

Biden and his wife Jill arrived in Florida a week after the collapse of the 12-story Champlain Towers South beachfront condominium killed at least 18 people and left 145 missing. Hundreds of first responders and search-and-rescue personnel have been painstakingly searching the pancaked rubble for potential signs of life. No one has been rescued since the first hours after the collapse. 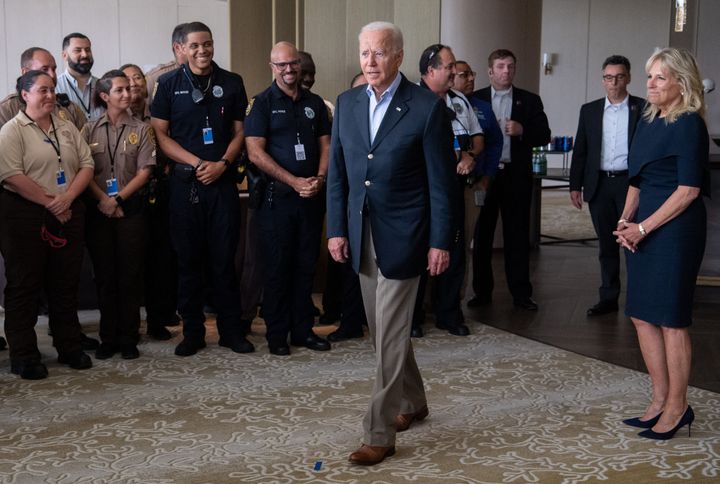 “This is life and death,” Biden said at a briefing from officials about the collapse. “We can do it, just the simple act of everyone doing what needs to be done, makes a difference.”

The president said he believed the federal government has “the power to pick up 100% of the cost” of the search and cleanup and urged the local officials to turn to Washington for assistance.

“You all know it, because a lot of you have been through it as well,” Biden said. “There’s gonna be a lot of pain and anxiety and suffering and even the need for psychological help in the days and months that follow. And so, we’re not going anywhere.”

Biden was briefed on the situation with Florida Gov. Ron DeSantis and Miami-Dade County Mayor Daniella Levine Cava, as well as the state’s two Republican senators, Marco Rubio and Rick Scott. The mayor, a Democrat, saluted the efforts to cross party lines in a time of “an unprecedented devastating disaster” and added that the unified government and community response “is what gives us hope.” 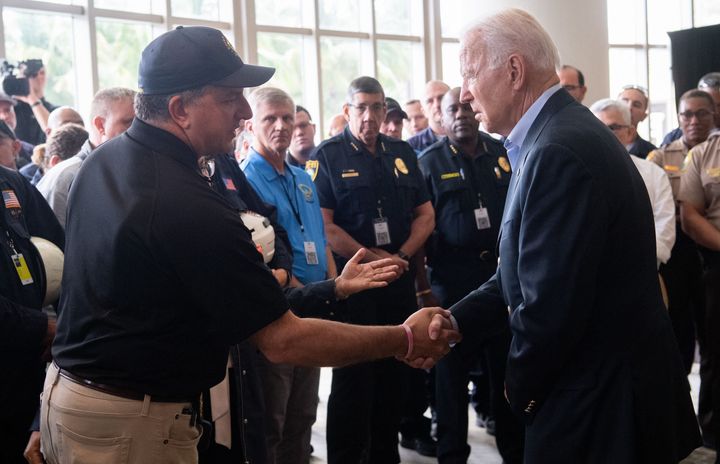 DeSantis, a rumored Republican 2024 presidential candidate, said to Biden that the “cooperation has been great,” declaring that the administration has “not only been supportive at the federal level, but we’ve had no bureaucracy.”

As Biden pledged federal help and touted the bipartisan nature of the response, he touched DeSantis’ hand to underscore the point.

“You know what’s good about this?” Biden said. “It lets the nation know we can cooperate. That’s really important.”

Biden then met with first responders who have worked around the clock on a rescue effort that has stretched into its second week amid oppressive heat and humidity and frequent summer storms.

“What you’re doing here is incredible, having to deal with the uncertainty,” said Biden, as he offered profuse thanks to those who have been working at the site. 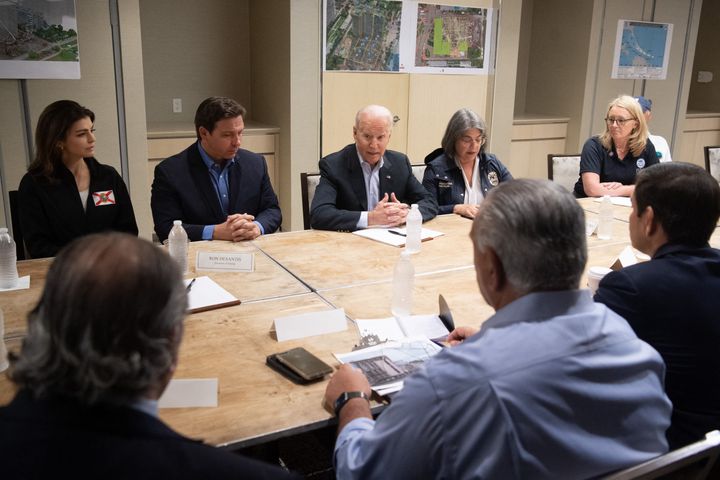 The president was also expected to meet privately for several hours with family members of those affected by the collapse before delivering remarks Thursday afternoon. A visit to the collapse site was uncertain, however, amid concerns about the stability of the debris.

White House spokeswoman Karine Jean-Pierre said Biden aimed to “offer up comfort and show unity” with his visit to the site.

Few public figures connect as powerfully on grief as Biden, who lost his first wife and baby daughter in a car collision and later an adult son to brain cancer. In the first months of his term, he has drawn on that empathy to console those who have lost loved ones, including the more than 600,000 who have died in the COVID-19 pandemic.

In thanking first responders, he referenced that car crash and a house fire as moments when he and his family needed to rely on them. 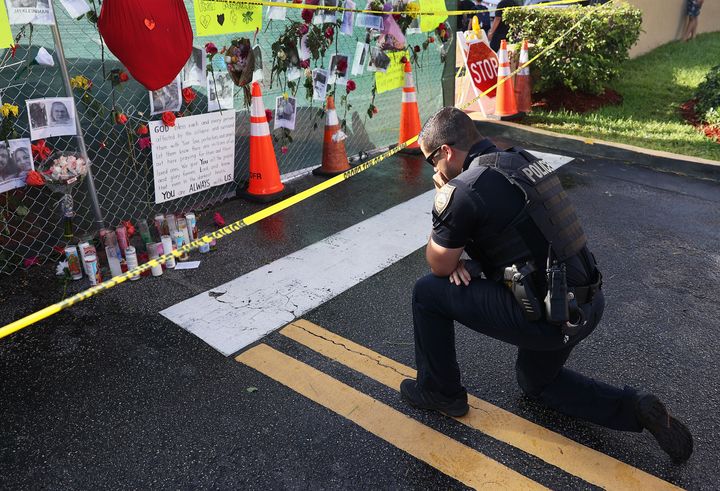 “Until we need you, no one fully appreciates what you do. But I promise you — we know. We know,” he said.

Biden has received regular updates on the building collapse. He also sent FEMA Administrator Deanne Criswell to the area for a tour of the site earlier this week with DeSantis.

And early Thursday, the White House said the Federal Emergency Management Agency deployed 60 staff and an additional 400 personnel across five search and rescue teams at the request of local officials. FEMA also awarded $20 million to the state’s Division of Emergency Management to help deal with unexpected emergency measures surrounding the collapse.

Biden’s day was spent entirely in a hotel about a mile north of the building site. The White House emphasized that it was being careful to coordinate with officials on the ground to ensure that Biden’s visit didn’t do anything to distract from the search and rescue effort.

“They wanted us to come today,” Jean-Pierre said.

Biden has supported an investigation into the cause of the collapse, and on Wednesday the National Institute of Standards and Technology, which sent a team of scientists and engineers to the site, launched an investigation. 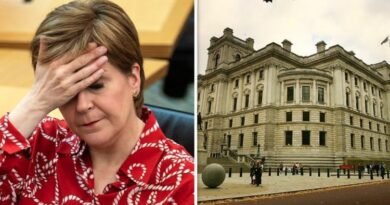