Home » Politics » Boris Johnson POLL: Is PM still fit for job in face of letters of no confidence? 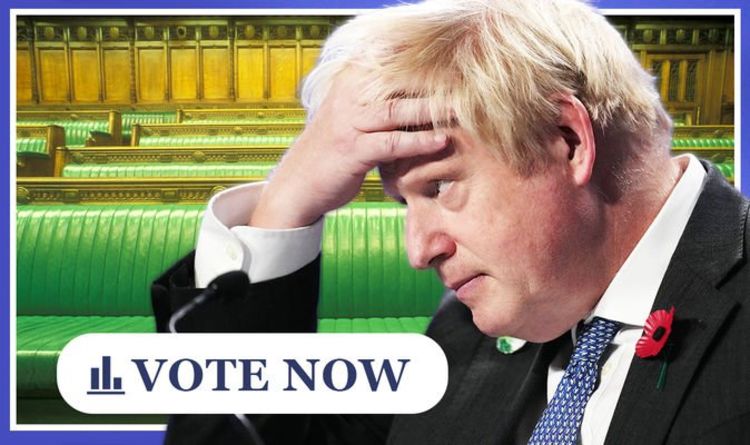 Tory MPs, including one whip, have claimed up to a dozen letters of no confidence have been submitted against Boris Johnson. The news comes after the Prime Minister made a speech to business leaders on Monday where he compared himself to Moses, quoted Lenin, lost his place for 21 seconds, made car engine noises, and went on a tangent about his trip to Peppa Pig world.

He asked the audience for a show of hands for who had been to the Peppa Pig Hampshire attraction, six hours away from the conference location of South Shields, and said “not enough”.

MPs have since come to defend Mr Johnson’s “tigerrish” nature, as Dominic Raab called it, or have slammed the Prime Minister.

Labour’s shadow chancellor, Rachel Reeves, called the speech “shambolic” and said “no one was laughing, because the joke’s not funny anymore”.

“Instead, all they got was Boris Johnson rambling on about Peppa Pig.

“It is a perfect metaphor for Johnson’s chaotic, incompetent government.”

A Downing Street aide said Mr Johnson’s speech “was embarrassing”, while a senior Government source told the BBC’s Laura Kuenssberg: “There is a lot of concern inside the building about the PM… It’s just not working.”

After a month of ‘Tory sleaze’ scandals, Mr Johnson’s approval ratings have fallen dramatically amongst the public, and a new wave of no confidence shows Conservative party members are displeased with his performance too.

A Tory MP told the Telegraph: “If the next month is like the last month, and horror stories continue, more letters will be submitted.”

If 15 percent of sitting Conservative MPs submit a letter of no confidence, a leadership contest is triggered – meaning 50 letters would need to be submitted.

Chancellor Rishi Sunak and Foreign Secretary Liz Truss are seen to be the most likely contenders to take over from Boris Johnson.

The latest polling from YouGov revealed just 29 percent of respondents believe he is doing well as PM – a record low since he began his tenure as the leader of the country.

In comparison, of the 1,600 Great British adults polled, 64 percent believe he is doing badly in his role.

DON’T MISS:
Is the Monarchy more valuable to Britain than the BBC? VOTE
BBC licence fee on brink: Nadine Dorries admits levy ‘up for review’
Sturgeon independence bid on brink as another poll ‘turns against’ SNP

Earlier this month, the polls put Labour ahead of the Tories party for the first time in a year.

Now it appears a significant portion of the Conservative Party are rebelling against his leadership.

On Monday, Cabinet ministers attending the Tory fundraiser Winter Ball – where attendees dined in luxury and bid tens of thousands of pounds for days out with the Chancellor and Foreign Secretary – were shocked when they had to rush back by 9:30pm for a crunch vote.

The Government’s social care bill only passed the vote by just 26, and had the Cabinet not come back, the vote would have been lost – a situation they did not expect.

Deputy Political Editor for the Spectator, Katy Balls, said: “The close shave serves as a reminder of the trouble Boris Johnson finds himself in.”

She added: “The fact that so many MPs abstained in the social care vote shows the lack of goodwill towards the PM right now”.

Tell us your opinion of Boris Johnson in the comments section below.

Stay up to date with Brexit, the SNP and news from Number 10 by signing up for the free politics newsletter here: newsletter-preference-centre