An academic has claimed most Britons who voted “Leave” in 2016 now believe that Brexit was a mistake. Chris Grey, Emeritus Professor of Organisation Studies at Royal Holloway and ex-Professor at Cambridge University, said “Brexiteers are losing the post-Brexit narrative”. Writing for his blog Brexit and Beyond, Mr Grey noted an “‘admission-yet-denial’ phenomenon” in Brexiteers with ministers acknowledging issues with leaving the EU but pointing to other factors including the pandemic and Ukraine war.

Prof Grey added: “What is striking is how convoluted some of these arguments are, and how defensive.

“If Brexit had been even half as successful as it was claimed it was going to be then, by now, you’d expect that to be easily demonstrable and increasingly self-evident even to those who had formerly doubted, or at least to a growing number of them.”

With his argument in mind, Express.co.uk asked readers if they agreed with Prof Grey’s warning.

In a poll that ran from 2pm on Monday, May 9, to 5pm on Tuesday, May 10, Express.co.uk asked: “Do you regret leaving EU after academic’s warning?”

A further 48 people said they did not know either way.

In the hundreds of comments left below the accompanying article it is clear that readers disagree with Mr Grey’s argument.

One user, Greeneyz said: “I don’t regret it for one single second. Best decision the majority of the British public ever voted for.”

Username Yada yada said: “The Brexit vote was the greatest democratic vote given to the people.”

While username BobPage said: “I do not regret voting for Brexit for one single second.”

They added: “I regret that other countries that should be our friends and allies have become openly hostile to us as a result of a democratic decision.

“I regret that some of our own citizens, including MPs in Westminster, feel it necessary to undermine a democratic decision and to try and undo it.”

Others commented that they would make the same decision today as they did in the referendum six years ago.

Username DoggyDay wrote: “If we had the vote again tomorrow, I would vote to LEAVE AGAIN!”

Another, username Trudi432 said: “I don’t know anyone friends, neighbours or family that has any regrets about leaving the EU. The only regret they do have is it should have happened sooner.”

And username FreeBrexiteer said: “Would vote to LEAVE a thousand times over. And I really believe a much higher percentage would in another vote.”

DON’T MISS
‘Couldn’t clear a room faster’ Blackford humiliated as MPs rush for the door before speech [LATEST]
Lord Frost says UK is being forced to act ‘unilaterally’ over hated Brexit trade border [INSIGHT]
Brexit rebellions are back! Boris facing Remainer plot over plan to stand up to Brussels [UPDATE]

Some noted that they did not regret Brexit but how it had been handled like username edward coulson who said: “The only thing i regret is not having leavers negotiate our exit.”

“Democracy is what it is. You win some, you lose some, and either way you move on.

“But don’t get me wrong – I also don’t think Brexit is going brilliantly well.

“There are so many aspects of it that could have been better, several that never should have been agreed by either side, and a whole raft of issues.”

Bloomberg to spend at least $100M to help Biden in Florida 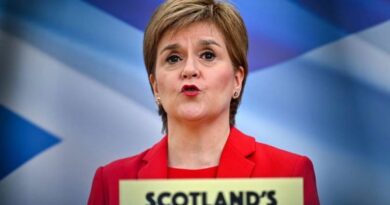