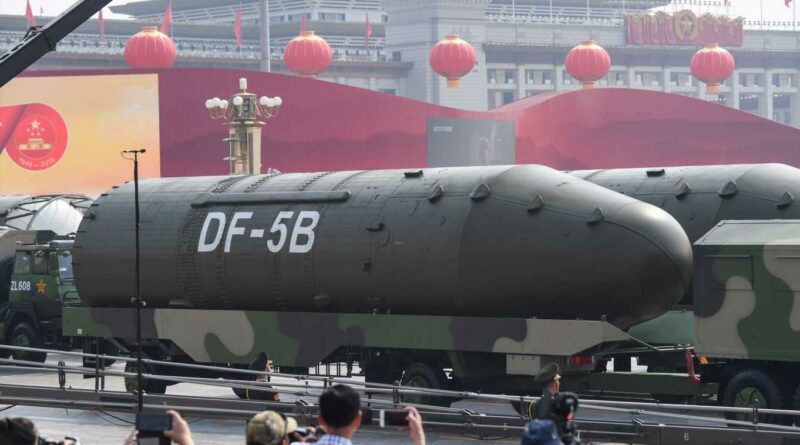 WASHINGTON – The Pentagon said Wednesday that China is rapidly expanding its nuclear arsenal and could have 1,000 nuclear warheads by 2030, part of Beijing's ambitious military buildup.

The updated estimate marks a dramatic increase from the projection reported in last year's China Military Power report, which placed the tally around 400 warheads within a decade.

"Over the next decade, the PRC aims to modernize, diversify and expand its nuclear forces," the Pentagon warned in a congressionally mandated report, referring to the People's Republic of China.

"The PRC is investing in, and expanding, the number of its land, sea and air-based nuclear delivery platforms and constructing the infrastructure necessary to support this major expansion of its nuclear forces," the report said, adding that China has begun building at least three intercontinental ballistic missile silo facilities.

China's growing arsenal is still dwarfed by the United States and Russia who own the lion's share of the world's nuclear weapons. The American stockpile stands at approximately 3,750 nuclear warheads.

Washington has previously called on China to join the U.S. and Russia in a new arms control treaty.

"Although the PRC publicly advocates for peaceful unification with Taiwan, the PRC has never renounced the use of military force; the circumstances under which the PRC has historically indicated it would consider using force remain ambiguous and have evolved over time," the Pentagon's report said.

The report added that China possesses "a range of options for military campaigns against Taiwan," including potential air and maritime blockades to a full-scale amphibious invasion.

"The historical task of the complete reunification of the motherland must be fulfilled and will definitely be fulfilled," Xi said in an October 8 address.

Earlier on Wednesday, the nation's highest military officer told an audience at the Aspen Security Forum that he believed it was unlikely the Chinese Communist Party would seize Taiwan within the next few years.

"Based on my analysis of China, I don't think that it is likely in the near future," U.S. Army General Mark Milley, chairman of the Joint Chiefs of Staff, told the Aspen Security Forum.

"Having said that, though, the Chinese are clearly and unambiguously building the capability to provide those options to the national leadership if they so choose at some point in the future. But near future? Probably not. But anything can happen," Milley added.

A Bootleg Trader From Communist Era May Decide Who Runs Slovakia