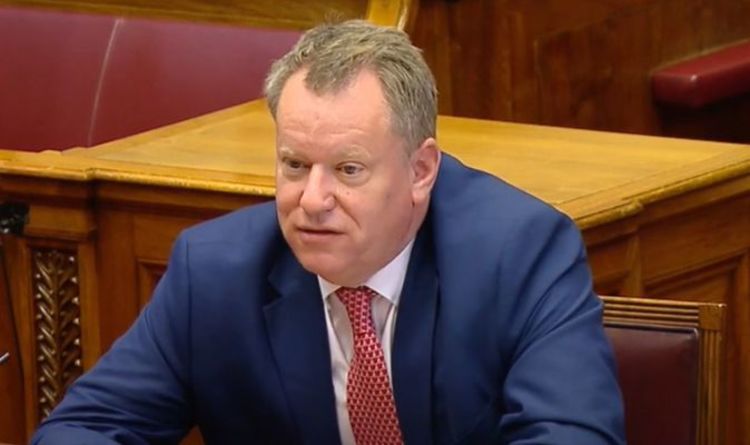 Speaking to the Northern Ireland Assembly today, Lord Frost claimed the Government had “inherited” difficulties from Mrs May’s deal. Such is the chaos caused to Northern Irish businesses, DUP member Christopher Stalford claimed Lord Frost had inherited a “dog’s breakfast” of a deal. Mr Salford also added: “You’ve been left to clean up the mess haven’t you?”

In response, Lord Frost claimed the Government had been left with elements of the withdrawal agreement which have done the UK harm.

He said today: “We intend to implement what we signed up to but it’s the fact of implementation that’s causing the problem.

“Unfortunately we were not able to go back to scratch and do things in a different way and I think the previous team are to a very large degree responsible for some of the infelicities in this Protocol and the Withdrawal Agreement that we might be better without but unfortunately we are where we are.”

Mrs May agreed to the Irish backstop in order to avoid the creation of a hard border on the island of Ireland.

In order to do so, Mrs May agreed the whole of the UK would retain a close relationship by staying a part of the customs union for an indefinite period.

Those arrangements would have remained and applied unless both sides agreed they were no longer necessary.

In terms of the customs territory, under Mrs May’s deal there would have been a customs union between Great Britain and the EU.

Northern Ireland would have remained as part of the EU customs territory thus creating an external tariff between the UK and EU.

After Parliament rejected this part of the deal, Boris Johnson claimed he would get rid of the legislation.

Although similar requirements remained, the Northern Ireland protocol retains the country as part of the UK customs union.

It does, however, leave Northern Ireland as part of the single market which means there will be checks on goods entering from Great Britain.

While agreed by both sides, Lord Frost claimed there must be alterations to the protocol in order to ease issues to trade.

He told the Stormont Assembly: “I don’t think it’s right to look at the Protocol as a sort of definitive text that was there in October 2019 and there’s nothing more to say. It’s very clear from reading the text that that’s not the case.

“For example, the whole concept of goods at risk, which is obviously at the core of some of the problems in movements between GB and Northern Ireland.

“It’s not reasonable to say, given that the situation has changed in various ways and given that parts of the Protocol remained to be worked out, that it is a definitive text and as of October 2019 that’s it and there’s nothing more to say.”

Lord Frost also accused the EU of being unreasonable in responding to the UK’s concerns over Northern Ireland.

He said: “Their solution is ‘why don’t you adopt our rules, then there won’t be a problem’.

“We’re accused of being ideological but it seems to me, equally ideological to say ‘why don’t you just adopt our laws?'”

A comedian is hot favorite to be Ukraine's next president – so what are his policies?