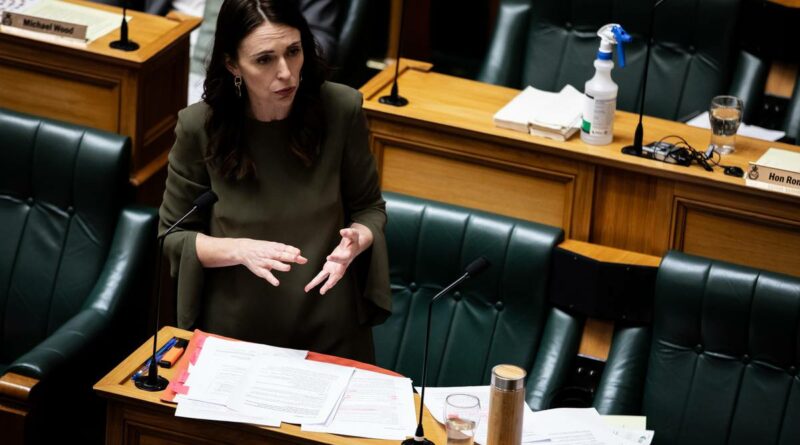 Covid-19 Response Minister Chris Hipkins said the Government was trying to disclose as much detail regarding the latest outbreak as Parliament returns.

“It does mean there is a bigger lag between when information is first identified and when it is disclosed,” he told those gathered.

Facing questions from National’s Covid-19 spokesperson Chris Bishop, Hipkins said the Government can include the reproduction rate or ‘r’ rate in the daily updates.

“I’m sure the ‘r’ rate could be included in the daily update if that is what the member wanted.”

Hipkins dismissed issues around surge capacity of contact tracers, saying that the amount of surge capacity needed depended on the scale of the surge.

Fixty to sixty people are awaiting transfer to a quarantine facility following a positive Covid-19 test, he said.

David Seymour has tried to reestablish the Epidemic Response Committee in Parliament, but it was rejected.

Hipkins then countered by trying to establish the virtual Parliament he wanted. This was also rejected.

Hipkins said there are about half a million vaccines in vaccination centres. These numbers are not included in the list of vaccine stocks that are disclosed each day.

The Herald had earlier reported the Government was discussing bringing in additional doses of the vaccine from other countries.

The Government will face a grilling on two unfolding crises: the recent outbreak of the Delta variant of Covid-19 in New Zealand and the Defence Force’s involvement in the evacuation of Afghanistan.

These debates will take the form of ministerial statements, where ministers will make a speech outlining what the Government has done and why, and then MPs from all other parties will get the opportunity to ask questions on that topic.

Usually, in question time, the debate is limited by the number of questions the Opposition has to ask of ministers – each party has a limited number of primary and supplementary questions it can use to grill the Government.

In a debate on a ministerial statement the only restriction is time, meaning the debate is often far more free-flowing.

The debate will be Labour versus National and Act. The Green and Maori parties have decided to sit Parliament out, arguing that it should not be meeting in person because of the current health crisis.

These two debates will be followed by a new-look question time. Usually there are 12 questions in question time, divided up between the parties depending on how many MPs each party has that are not ministers.

That means that Labour still gets a large allocation of questions – meaning much of question time is spend not necessarily holding the Government to account, but with Labour MPs giving free hits to Labour ministers to advertise the work they are doing.

This time, questions will only come from the Opposition. There are six, rather than 12 questions.

National leader Judith Collins will ask whether the Government is sticking by its strategy that it would not be the first country to roll out a Covid-19 vaccine because there was no Covid in the country.

Act leader David Seymour will ask whether the Government had been making improvements to the border, as it had promised.

The House will be sitting for reduced hours this week. Usually it would sit until 1pm on Tuesday and Wednesday, passing legislation well into the night.

Instead, the House will rise early, following questions on Tuesday.

On Wednesday, it will only debate the latest Covid-19 orders, which are necessary for the current outbreak.

Boris Johnson ordered to WALK AWAY from Brexit talks with EU – ‘End this farce!’