Progressives are voicing last-minute concerns that a crowded field of candidates in the Democratic primary for Manhattan district attorney is increasing the chances that a self-funding Wall Street ally will prevail in the Tuesday race.

Tali Farhadian Weinstein, a former federal prosecutor and general counsel in the Brooklyn District Attorney’s Office, has spent more than $8.2 million of her own money and raised another $4.5 million from a donor pool that includes a number of Wall Street executives for a total cash haul that far exceeds her rivals. Her husband, Boaz Weinstein, is a wealthy hedge fund manager.

Farhadian Weinstein, who would be the first woman to serve as Manhattan DA, oversaw moderate criminal justice reforms while working for the Brooklyn DA. But she has attacked two of her rivals as soft on crime, and critics fear that she would go easy on Wall Street.

She is trailing former federal prosecutor Alvin Bragg, a more liberal reformer, in at least one public poll. Bragg, who was also a deputy attorney general of New York, would be Manhattan’s first-ever Black DA.

But some progressives worry that in a field of eight Democrats, Bragg’s competition within the progressive lane is clearing a path for Farhadian Weinstein. Farhadian Weinstein, who clerked for Attorney General Merrick Garland while he was on the federal bench, is backed by former Secretary of State Hillary Clinton, former Attorney General Eric Holder and Reps. Nydia Velázquez, Adriano Espaillat and Ritchie Torres.

Sean McElwee, a Harlem resident and co-founder of the think tank Data for Progress, is among those encouraging progressive voters to back Bragg in the interest of stopping Farhadian Weinstein.

“There is one candidate who can beat her,” he said.

Data for Progress conducted a poll earlier in June that showed Bragg and Farhadian Weinstein with 26% each and none of the other candidates breaking double digits.

On Monday evening, Data for Progress released a new poll showing Bragg with 34% to Farhadian Weinstein’s 25%. Aboushi, who had 10%, was the only other candidate with double-digit support.

Critically, unlike the New York City mayor’s race, which is being decided by a ranked-choice voting system, the Manhattan DA primary, subject to state election rules, is a first-past-the-post contest.

That means that if Farhadian Weinstein ekes out a narrow plurality, she wins automatically.

Zephyr Teachout, a Fordham law professor and former political candidate influential in progressive circles, has cited this factor in her calls for the left to rally behind Bragg in a bid to stop Farhadian Weinstein.

In a column in The Nation on Monday, Teachout addressed herself to supporters of Quart, Orlins and Aboushi, three other contenders who have attracted progressive interest.

“There are three other progressive candidates, none of whom have a realistic path to victory,” she wrote. 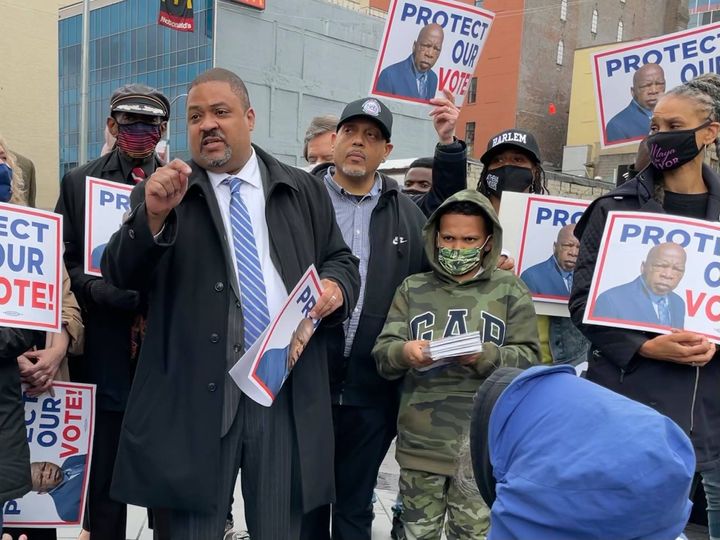 The Manhattan DA’s office has jurisdiction over the massive concentration of financial firms that call Manhattan home. But all too often, retiring DA Cy Vance targeted minor financial players rather than powerful multinational banks. (He also declined to go after elite Manhattan figures like the Trump family and disgraced Hollywood producer Harvey Weinstein.)

Bragg has outlined a plan to finally turn the DA’s office into a serious vehicle for policing white-collar crime. He is rejecting donations from corporations, lobbyists and lawyers who had business before the Manhattan DA’s office in the past four years. And Bragg has detailed proposals for shifting DA office resources from minor crime prosecutions to big, systemic corruption and white-collar crimes cases.

“Of all of the candidates for Manhattan District Attorney, my dedication to rooting out white collar crime is unmatched,” he writes on his campaign website.

Farhadian Weinstein, by contrast, is refusing contributions of larger than $1 from defense lawyers and firms that have a defense law practice, but she has not erected filters on business community donors that might avoid perceived conflicts of interest.

Her campaign website includes a section about her commitment to fighting “economic crimes,” where she promises to increase the DA office’s “capacity” to prosecute white-collar offenses.

Overall though, her proposals are much less detailed than Bragg’s, and rival campaigns argue that she would inherently be less inclined to pursue the financial executives on whom she has relied for numerous contributions of $30,000 or more.

High-profile financial executives who have given her five-figure checks include Pershing Square Capital Management founder Bill Ackman and his wife, and Ken Griffin, founder of the hedge fund company Citadel and a prodigious contributor to conservative causes.

“We are talking about an enormous amount of money that common sense tells you has the power to shape judgment,” Teachout told The New York Times in April.

Kathryn Wylde, head of the Partnership for NYC, the city’s largest big business lobby, essentially agreed that Farhadian Weinstein is likely to go easier on Wall Street, though she considers it a selling point.

“The business community has generally thought that Cy Vance has done a good job at reconciling quality of life and criminal justice issues and that they would like to see continuity and a thoughtful approach and, if I may say, a moderate approach,” Wylde told Gothamist in April.

It has not helped Farhadian Weinstein’s case in the eyes of skeptics that thanks to legal tax deductions, she and her husband did not pay any federal income taxes in 2013, 2015 and 2017. The next Manhattan DA is tasked with taking over the investigation of former President Donald Trump’s taxes.

“In 6 of the last 11 years (the years in which we had income), we paid more than 50% of our income in Federal, State and New York City taxes,” Farhadian Weinstein said in a statement to ProPublica, which broke the news about her tax bill. “In the other years, we earned no net income and, as a result, did not pay income tax.”

Of course, other candidates in the race have received big checks from financiers as well. Bragg, for example, has received five-figure contributions from James McClave, a partner at Jane Street Capital, and Stacy Schusterman, a former CEO of Samson Investment. (Schusterman has supported a number of criminal justice reform causes through her philanthropy.)

“I am the only candidate whose motives [have] been scrutinized and questioned ― even though every candidate has accepted campaign contributions from individuals who work on Wall Street and wealthy people,” Farhadian Weinstein told HuffPost in a statement. “Let me be clear: no matter who you are or what power you hold, if you break the law or harm New Yorkers, under my watch, you will be held accountable.”

In addition to progressive concerns about Farhadian Weinstein’s commitment to policing Wall Street, left-leaning lawyers and activists are worried that she is not willing to go far enough to reduce the number of people who are incarcerated, particularly for minor offenses.

Bragg is proposing more sweeping criminal justice reforms than Farhadian. Unlike Farhadian Weinstein, he supports disbanding the NYPD’s vice squad, has promised not to seek life sentences without parole, and would decline to join New York state’s association of DAs, which has lobbied against criminal justice reforms. And while Farhadian Weinstein has vowed not to prosecute sex workers, Bragg has said he would not prosecute sex workers or buyers.

Farhadian Weinstein has elicited criticism for a series of attacks criticizing Bragg and Quart’s opposition to a state law that requires investigation of domestic abuse cases even when both parties have dismissed their complaints. One TV ad argues that the two men would “put women and families at risk of further abuse.”

Bragg and his allies have argued that the attacks play on racist tropes about Black men assaulting women, though these particular attacks also target Quart, who is white.

Farhadian Weinstein insists that she is making a substantive case about the need to proceed with investigations for the safety of abused partners, even when both parties dismiss their complaints. “I put a spotlight on the blind spots of the two men in the race when it comes to violence against women,” she told The New York Times.

Other candidates in the race have taken stances further to the left than Bragg, however, leading to some dissension among progressives about the best alternative to Farhadian Weinstein.

Indeed, before Farhadian Weinstein announced her bid, flooded the race with cash and sought to take advantage of rising concerns about violent crime, many reformers assumed that Bragg would occupy the moderate lane in the primary against someone even bolder. 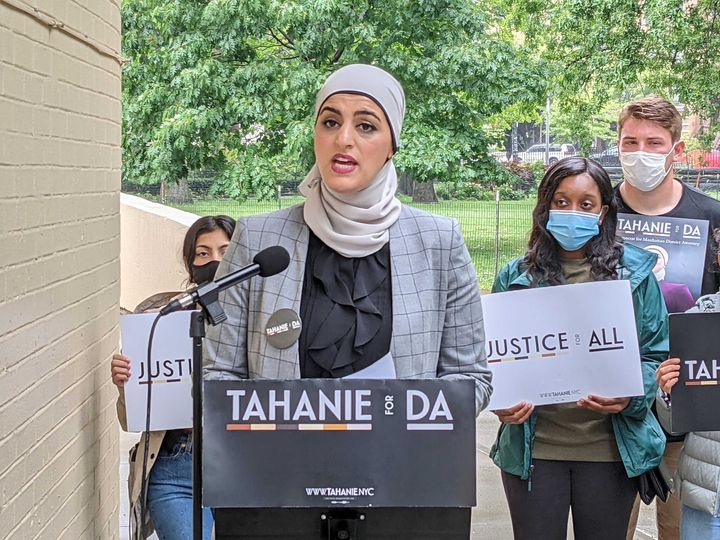 Aboushi, in particular, has sparked enthusiasm on the left, winning the support of progressive groups like the New York Working Families Party and elected officials like Sen. Bernie Sanders (I-Vt.) and NYC Public Advocate Jumaane Williams. As a headscarf-wearing Muslim, she has personal experience with discrimination, and her father’s incarceration inspired her to become involved in criminal justice reform.

Shaun King, a co-founder of the Real Justice PAC, which is backing Aboushi, said that if anything, progressives should have lined up behind her candidacy.

After Tiffany Cabán lost her bid to win the Democratic primary for Queens DA in 2019 by a handful of absentee ballots, King, a Brooklynite, resolved to make sure that progressives rallied behind a single left-wing candidate in the Manhattan contest two years later.

“We were the first organization to endorse ― and started working right away to get other orgs on board,” he said. “WFP joined us, many others did as well, but ultimately groups splintered in 6 different directions.”

Although Aboushi has raised a fraction of Bragg’s money and lacks his managerial experience, her campaign maintains that she represents progressives’ best shot at a win.

“Tahanie is unflinching in her vision for reform, which is why she has the longest list of credible progressive endorsements like Jumaane Williams, Working Families Party, The Jewish Vote, and of course Bernie Sanders,” Aboushi’s campaign manager Jamarah Hayner said in a statement.