The US president urged Mr Johnson to “celebrate” after he secured a huge majority of at least 75 seats.The Prime Minister’s victory puts Britain firmly on course to leave the EU next month, where he will seek to strike a free trade deal by the end of 2020. Mr Trump said on Twitter: “Congratulations to Boris Johnson on his great WIN! Britain and the United States will now be free to strike a massive new Trade Deal after BREXIT.

“This deal has the potential to be far bigger and more lucrative than any deal that could be made with the EU.

The prospect of a trade deal with the US was a major talking point during the election campaign, with Labour claiming the NHS was at risk of being sold off to US companies in the fallout from Brexit.

This was denied by both sides, with Mr Trump telling journalists during his recent visit to Britain for the Nato summit that he wants “nothing to do with” the health service. 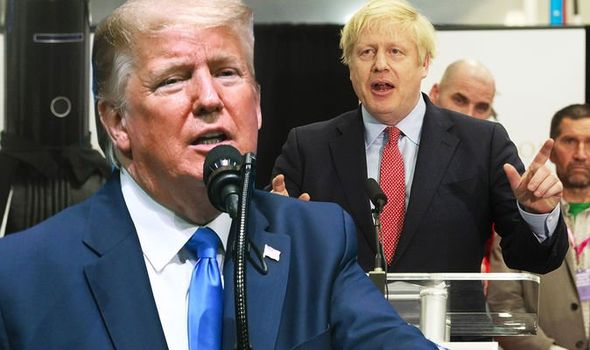 He added that he had “never even thought about it”, despite stating during a previous visit that “when you’re dealing in trade, everything is on the table”.

The Prime Minister and the President have a tense history, with Mr Johnson once joking that he would avoid some parts of New York because of the “real risk” of meeting him.

Nonetheless, Mr Trump has consistently offered his support to Mr Johnson since taking up the Presidency, telling the Sun last year that he would make a “great” Prime Minister, even though Theresa May was still in the role at the time.

The Prime Minister has said he will not extend the transition period once the UK has left the EU beyond the end of 2020.

Therefore he needs to strike a free trade deal with the European Union to avoid the UK leaving on WTO – or no-deal – terms.

However, few trade experts believe this will be possible in that time frame, as they usually take many years.

Mr Johnson will also aim to get a trade deal agreed with America as quickly as possible.

The Peterson Institute for International Economics think tank said it takes on average one and a half years, for the US to sign a trade deal with a partner and more than three and a half years to get to the implementation stage.

Mr Johnson also couldn’t hide his delight this morning as he declared: “We did it, we pulled it off!”

During his victory speech, he added “with this mandate we will at last be able to get Brexit done.”

He said: “we smashed the roadblock, we ended the gridlock” as he celebrated “the biggest Conservative majority since the 1980s” with party workers in central London.

If Trump weren’t president ‘he’d be in handcuffs’: Sen. Warren