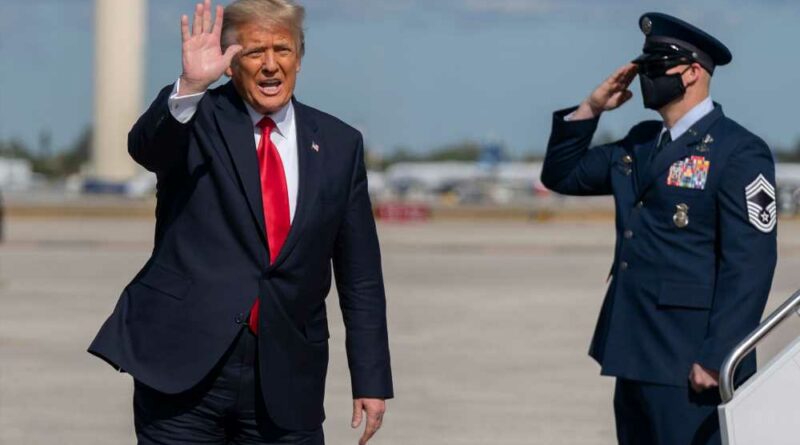 Less than one month after leaving office, Donald Trump's presidential helipad at Mar-a-Lago, his members-only club in Palm Beach, Florida, is officially no more.

On Tuesday, demolition crews were spotted at the private club removing the 50-foot wide, concrete structure, which was erected during Trump's presidency in order to accommodate the 25,000-lb. Marine One helicopter.

In January 2017, Palm Beach's town council unanimously approved a permit for Mar-a-Lago to construct the helipad on which Marine One could land.

While neighbors weren't keen on the idea when it was first presented, town officials argued that it would be a better option than the traffic jams caused by a motorcade coming to and from the airport.

The permit was granted on a contingency basis, according to a senior permit coordinator at the Town of Palm Beach, who told PEOPLE in November that it specified the helipad could only be used for business related to the presidency and that it could no longer be used once Trump was out of office.

According to Palm Beach's WPTV, an excavator could be seen removing the helipad Tuesday. Though the helipad is gone, Trump's conflicts with his neighbors may not be behind him.

A group of locals have taken issue with the former president's plans to live at Mar-a-Lago, pointing to an agreement Trump signed in 1993, after he converted Mar-a-Lago from a private residence to a business.

That contract stated that no member would stay at Mar-a-Lago for longer than seven days at a time (and even then, only three times per year).

But according to a recent review of the document by a town attorney and a presentation given by Trump's own lawyer, Trump, 74, is still legally able to live at his private club.

John C. Randolph, an attorney for the city of Palm Beach, said in a recent town council meeting that the town's zoning code allows that "a private club may provide living quarters for bona fide employees."

Randolph said that an employee of a private club is defined as "any person generally working on site for the establishment … and includes sole proprietors [and other owners]."

"I have been advised that former President Trump is indeed an employee under this definition," said Randolph, who nonetheless noted that a previous Trump attorney had promised city officials he would not live at Mar-a-Lago.

Trump's attorney John Marion called the debate over the '93 agreement "silly," agreeing with Randolph that the town's zoning code "allows for [Trump] to live there."

Since leaving the White House, Marion said that Trump was back to serving as the president of Mar-a-Lago and was therefore an employee in the legal sense.

"He's very active on the property," Marion said. "This guy — as he wanders the property — is like the owner of the town of Mar-a-Lago. He's ever-present and he loves it there."