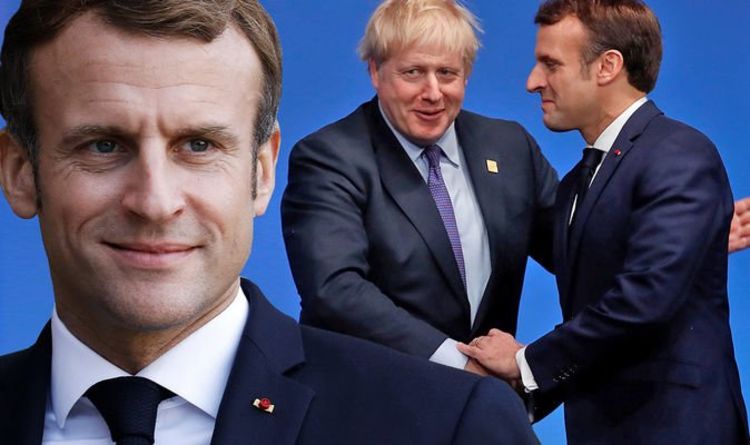 The French President and Prime Minister Boris Johnson were at loggerheads earlier this month over new post-Brexit fishing rules. Legislation dictates that EU member states’ boats now need licences to fish in UK and Jersey waters, and UK boats need them to fish in the waters of EU member states. Licences are granted to boats that can prove they have fished in a particular area between 1 February 2017 and 31 January 2020.

Requiring proof in this way is normal practice in fisheries management and there are often disputes about the evidence.

But soon after, France accused the UK of not issuing its fishermen enough licences; the UK contended this.

France went on to threaten the UK with a trade war after one deadline to agree on a solution passed without action.

The following day, however, on December 12, the UK, France and the EU settled the fishing row, with talks of any trade war being dropped and the dispute appearing to be settled.

While tensions between France and the UK appear at an all time high, things have not always been so hostile.

In 2017, Mr Macron may have been described as something like an Anglophile after visiting London during his presidential election campaign.

It was here that the Frenchman praised the UK’s capital, describing it as “France’s sixth biggest city” in front of an audience of compatriots living there — thus adopting a phrase coined by Mr Johnson, who was at the time London Mayor.

As told by Thomas Kielinger writing in Welt, Mr Macron then went on to “praise British entrepreneurship and the call that many French people had followed to the island”.

The following year, Mr Johnson visited Mr Macron, then Foreign Minister, at a British-French summit where he dominated, proposing the construction of a bridge over the English Channel.

“The Brit recognised Macron’s political achievement to have conquered French politics with his own movement, ‘En Marche!’.

“Macron, for his part, conceded Johnson the ability to build rapport with the “people”, his charisma as a victorious campaigner several times over.

“Alpha animals, quite ready to test their antlers in battle, have both been tamed by respect, despite deep differences over Brexit.”

Little is left of this once “bromance”, however.

It also claimed that during a private conversation, the French President referred to him as a “clown”.

This came after Mr Macron was enraged by a letter tweeted out by Mr Johnson outlining a five-point plan to tackle the issue of Channel crossings.

At a press conference, Mr Macron said: “I spoke two days ago with prime minister Johnson in a serious way.

“For my part I continue to do that, as I do with all countries and all leaders.

“I am surprised by methods when they are not serious.

“We do not communicate from one leader to another on these issues by tweets and letters that we make public.”

Meanwhile, fishermen in the Hauts-de-France region have accused Britain of still holding back on 65 permits.

Artus Galiay, the representative to the UK for the Hauts-de-France region told Express.co.uk’s political correspondent, Dan Falvey, that in recent weeks up to 40 new licences had been granted to fisheries, but that local people were still saying they were short of 65.

In a statement shortly after the UK and the EU settled the row, the committee for maritime fisheries in the region said: “Far from satisfying the professionals of the sector, this news exasperates the fishermen of Hauts-de-France, who feel both betrayed by the British government … and neglected by the European Commission.

“Movements will be expected, movements which will target the import of British products”.

Trump Agrees With Assault Accuser to Unseal Files in Lawsuit