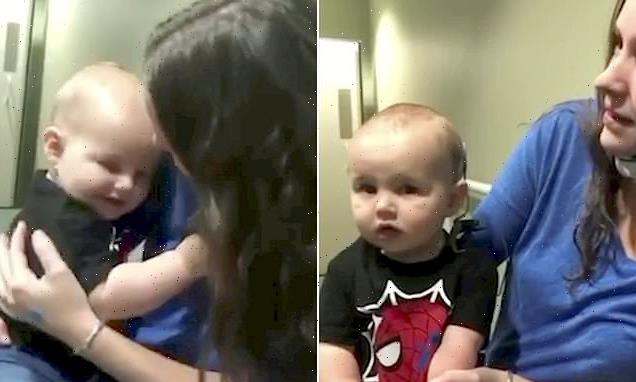 A profoundly deaf nine-month-old baby was able to hear his mother and father for the very first time after undergoing cochlear implant surgery.

Everett Colley, from Yorktown, Virginia, was born unable to hear, and had to learn sign language to communicate with his parents Ashley, 29 and Zachary, 30.

Doctors later told Everett’s parents that their son qualified for cochlear implant surgery and the nine-month-old went in for an operation at the Children’s Hospital of The King’s Daughters on December 6.

Two weeks later the infant had the external portions of the devices attached and he was finally able to hear his parents for the first time.

Footage, captured on December 20, shows Everett stare at both his parents as he hears their voices. 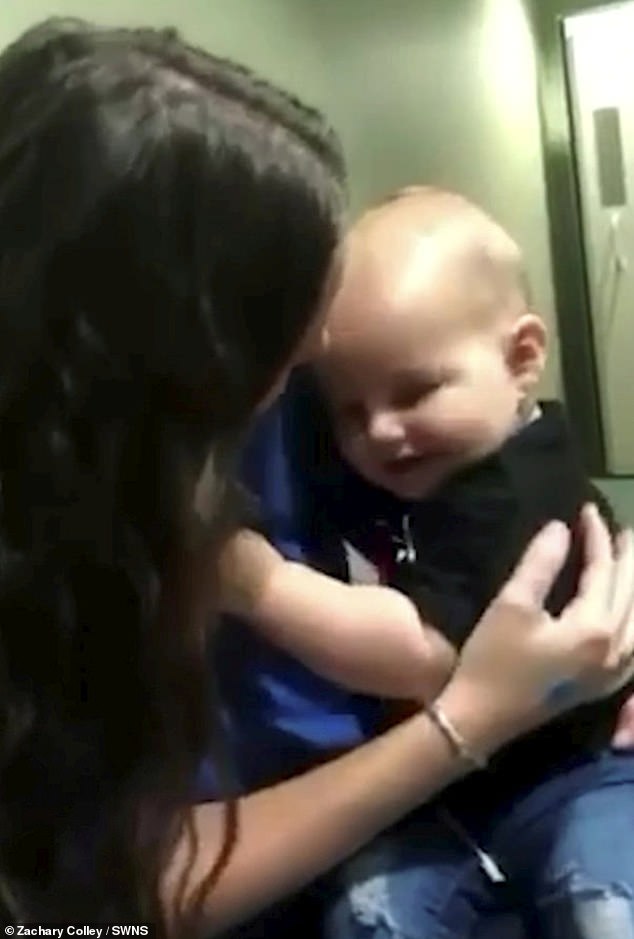 Everett Colley, from Yorktown, Virginia, hugs his mother Ashley, 29, as he hears his parents’ voices for the very first time on December 20 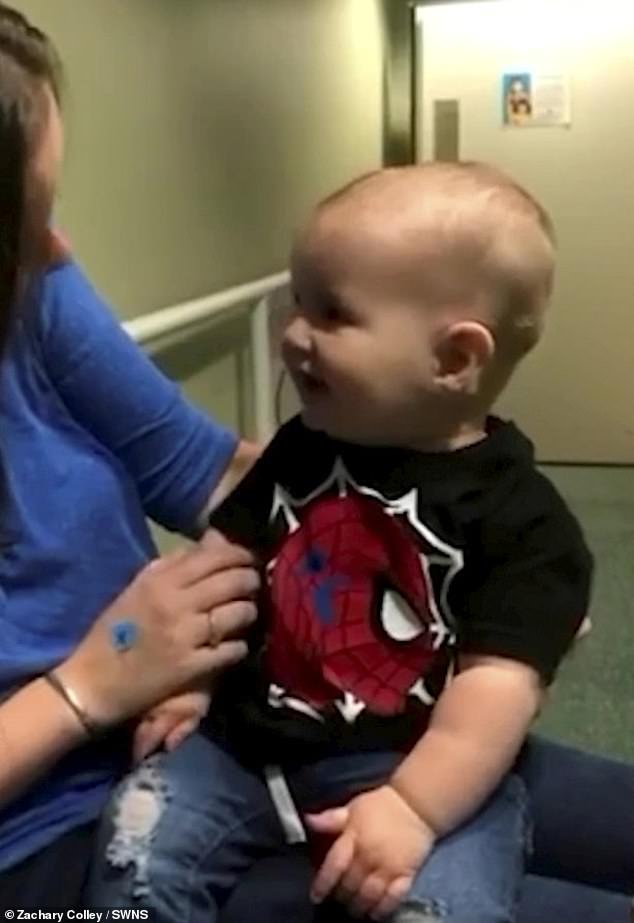 The infant gives his mother a big smile and his father Zachary, 30, begins to speak to him

He beams at his mother and leans in towards her for comfort as she says: ‘Hi.’

Stay-at-home mother Ashley said: ‘I think it’s mainly my husband’s voice that he seems to hear more than mine, but for him to hear that and go to me for comfort it’s beautiful.

‘I’m sure most people’s reactions when they first find out that their baby is deaf are like ours, it’s a horrible thing.

‘But it’s not, it’s really beautiful, he has a whole outlook of life that we don’t.’

After Everett was born in February, he failed his newborn hearing test, but as his older brothers Abel, seven, Greyson, five, Joel, three, did too, his mother was not immediately worried and initially thought it was due to fluid build-up in his ear.

She said: ‘I went back a month later and they did the same test as the newborn, and she was like ”it’s possible there could still be fluid”, and at that point I was questioning it.

‘Then I went back for an auditory brain response test and that’s when she pulled her chair up and she said he has profound hearing loss. 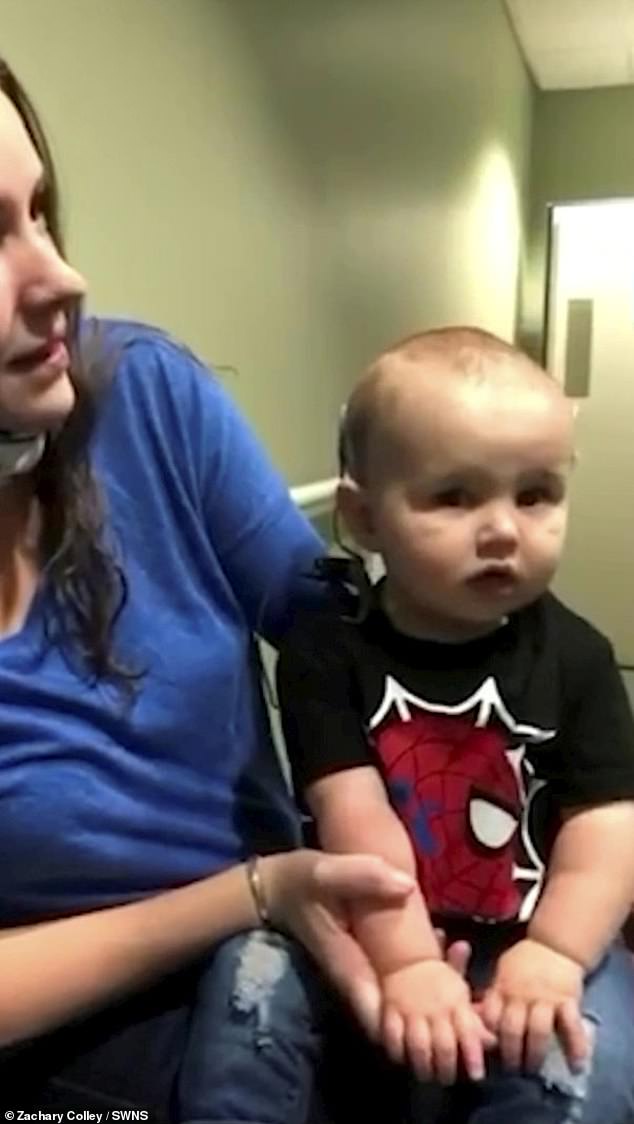 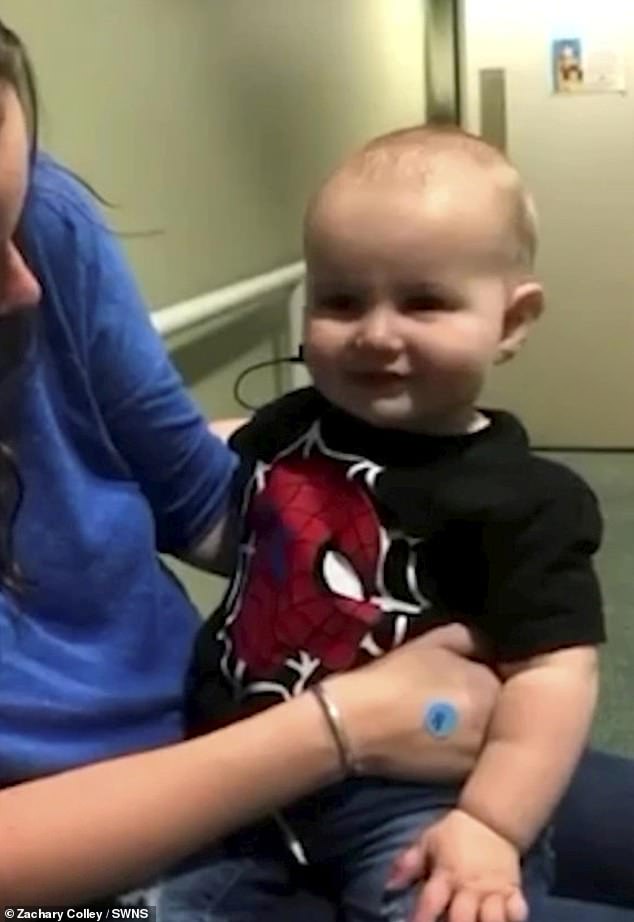 ‘That’s all I remember, and everything else was a blur, I felt I was kind of looking through her.

‘It doesn’t run in the family and it’s hard not to think of all the bad things at first, so I was very much in shock.

‘Because of Covid I was by myself, my husband was waiting in the car, and I just remember struggling to get out of the hospital and breaking down as soon as I saw him.’

The concerned parents were told that Everett qualified for cochlear implant surgery, where a small electronic device is placed under the skin behind the ear, and attached to an external microphone.

The device has wires that are attached to the cochlear, and converts sound picked up by the microphone into electrical impulses which are sent directly to the brain.

Ashley continued: ‘It was harder, especially at first, not knowing that he couldn’t hear.

‘When you shush them, that didn’t work with him, so when he got upset it was hard to soothe him.

‘We learned some sign language and our first one as a family was ”I love you”.

‘He definitely knows milk, so that has been helpful! 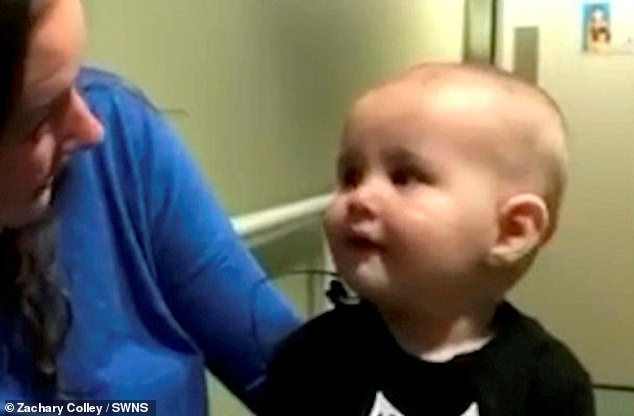 The young boy, who qualified for cochlear implant surgery, looks at his mother Ashley as she speaks to him

‘We love music, on the weekends we will put the Bluetooth speaker on, we will call it our little dance party.

‘One time we started giving them the speaker to hold so he can feel the vibration from it.’

Everett went in for a four hour surgery at the Children’s Hospital of The King’s Daughters on December 6 but it wasn’t until two weeks later that he had the external portions attached and he was finally able to hear his parents’ voices.

Ashley added: ‘After the surgery my husband was like ”Ashley have you even put him down?”

‘Instead of thinking about hearing loss as a bad thing, we think of it as a blessing.

‘Hearing is something we take for granted, but try not to hark on the bad things, it’s a beautiful life that they live.’ 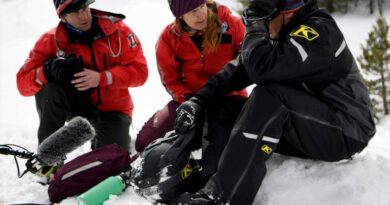 I invented the Rubik’s Cube. It can teach us about facing problems like COVID-19