The U.S. Environmental Protection Agency has issued final rule to reduce emissions of Hydrofluorocarbons by 85 percent over a period of 15 years.

The new rule, alongside other inter-agency actions, together represent one of the most consequential actions taken by the federal government to reduce climate pollution in decades.

Hydrofluorocarbons (HFCs) are potent greenhouse gases found in a range of appliances and substances, including refrigerators, air conditioners and foams. These super-polluting gases have an impact on warming the climate that is hundreds to thousands of times greater than the same amount of carbon dioxide emitted. HFCs are exacerbating climate change and extreme weather events – and the corresponding public health threats, physical damage, and economic costs.

These steps are expected to result in reductions of more than 4.5 billion metric tons of carbon dioxide-equivalent by 2050 — equal to nearly three years of U.S. power sector emissions at 2019 levels. It will make the U.S. domestic approach consistent with key provisions contained in the Kigali Amendment to the Montreal Protocol, an international agreement to reduce the consumption and production of HFCs. That amendment, if implemented worldwide, can prevent up to one half a degree Celsius of warming this century.

The Final Rule completes the introduction of the bipartisan American Innovation and Manufacturing (AIM) Act passed last year with widespread support from Democrats and Republicans, industry leaders, and environmental organizations.

The final rule from EPA will establish a landmark climate protection program that will phase down the production and consumption of HFCs by 85 percent below baseline levels within the next 15 years.

EPA’s rule establishes an allowance allocation and trading program to reduce HFCs, and creates a robust compliance and enforcement system. In addition, EPA is committing to addressing the use of HFCs in products, and is currently reviewing more than a dozen petitions to restrict HFC use in a wide range of applications.

EPA estimates the cumulative benefits of the rule is worth more than $272 billion through 2050.

The Biden Administration is taking coordinated steps across the federal government to catalyze reductions in HFCs, through four main action areas: Preventing illegal trade, production, use, and sale of climate-damaging HFCs; Supporting the development of HFC alternatives; Managing HFC stocks; Advancing research and testing to identify HFC alternatives and technologies.

Preventing Illegal Trade, Production, Use, and Sale of Climate-Damaging HFCs and Deterring and Punishing Violations. 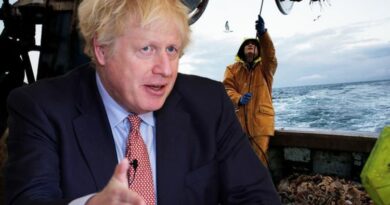 Brexit fishing FURY: Boris accused of ‘betrayal’ as ‘industry will be gone’ thanks to EU