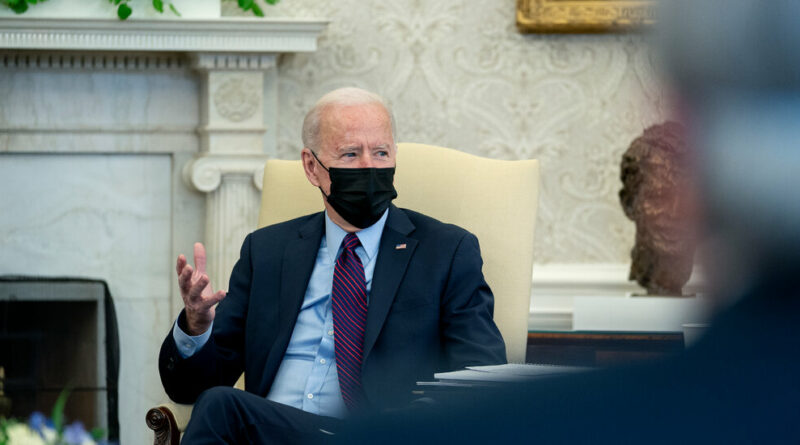 WASHINGTON — As Senators Susan Collins of Maine and Lisa Murkowski of Alaska walked the halls of the Capitol recently, the two moderate Republicans marveled to each other about how much time President Biden had spent with them during a meeting in the Oval Office.

The session had been scheduled for an hour, but then it stretched on and on, doubling in length as the conversation bubbled. The president, who has at times angered the left wing of his party by insisting there is still room for compromise with Republicans, told the lawmakers that he felt like he was back in the Senate, which he “liked the best” of any job he’s had.

Mr. Biden, it seemed, did not want the meeting to end.

Weeks into his presidency, Mr. Biden’s identity as a creature of the Senate and a deft navigator of its clubby idiosyncrasies has become a defining feature of his governing approach. He has leveraged his relationships with Republicans like Ms. Collins to create space and pressure for bipartisan compromises, even if none have yet materialized. And he has taken a hands-on approach to rallying Democratic lawmakers around his agenda, in the process ensuring that his party has a singular message and unified front against the many obstacles standing in his way.

To be sure, Mr. Biden is encountering a deeply polarized Senate that at times bears little resemblance to the one in which he served more than a decade ago, and he has made clear that he is willing to bypass Republicans on issues where he has the votes to do so and public opinion on his side. For all his chummy meetings and talk of bipartisanship, it now appears highly likely that his $1.9 trillion stimulus plan will be forced through on partisan votes over the opposition of Republicans — including many Mr. Biden has actively courted — who say it is far too large.

Still, the president is personally working Capitol Hill in a way that his recent predecessors could not, leveraging decades-old relationships and experience in Congress that they did not have.

The approach reflects the challenges Mr. Biden faces in maneuvering his priorities through an evenly split Senate, which has elevated the importance of working closely with its members. Already, he has transformed the West Wing into a veritable revolving door for senators.

Not long after his session with 10 Republicans that included Ms. Collins and Ms. Murkowski, a contingent from Delaware, Senators Thomas R. Carper and Chris Coons, both Democrats and allies of the president, met with him for an hour. After them came a group of top-ranking Democrats, including Senator Chuck Schumer, the majority leader from New York, who were in the Oval Office for 90 minutes. Last week, a bipartisan group of senators sat down with Mr. Biden to discuss infrastructure.

The sessions are starkly different from the sort former President Donald J. Trump held with lawmakers in either party, especially the anger-fueled, insult-filled meetings he had with top Democrats, complete with the president’s name-calling (he once told Ms. Pelosi she was a “third-rate” politician) and boasting (“I hate ISIS more than you do,” he told her).

Instead, Mr. Biden has gone out of his way to court Republicans, treating them to his first official Oval Office meeting — an honor he knew, as a former senator, would flatter them — from which they emerged with no agreements, but a palpable sense of bonhomie.

“The president was very gracious,” Senator Bill Cassidy, a Louisiana Republican who discussed education funding with Mr. Biden, said after their meeting. “If we’re going to go forward as a country, we have to do a better job than we’ve been doing of figuring where those who disagree with us are coming from.”

Senator Jerry Moran, a Kansas Republican who gushed to the president about how nice it was to talk with other humans during the pandemic, confessed to his colleagues after their meeting that Mr. Biden “knew more about his plan than we did and Joe Biden knew more about the Republicans’ plan than they did,” Mr. Carper recalled.

When weather prevented Senator Mike Rounds, Republican of South Dakota, from attending in person, he called in to one meeting with Mr. Biden, whom he later described as “cordial,” “interested” and “engaged.” Mr. Rounds told the president that he had personally received a stimulus check — evidence, the senator argued, that the next round of relief payments should be more targeted.

“He made it clear that he thought that the relationships that he had established in the United States Senate were still pretty important,” Mr. Rounds said. “But he didn’t give up any of the aces that he may have in his hand.”

Yet Mr. Biden is using the sessions to cultivate relationships with important potential allies.

Senator Jon Tester, a centrist Democrat from Montana who could be a crucial swing vote on the stimulus plan, said after his audience with Mr. Biden that in his 14 years in the Senate, no president had ever invited him to the Oval Office before.

“I’m going to be honest with you: It was pretty emotional for me,” Mr. Tester said. “I told the president that.”

Senators who had visited during Mr. Trump’s term remarked at the makeover of the room. Mr. Biden had taken down a portrait of the populist President Andrew Jackson, and replaced it with one of President Franklin D. Roosevelt, who helped bring America out of depression with the creation of robust government programs. As they looked around the room, they saw busts of the Rev. Dr. Martin Luther King Jr., Cesar Chavez and Robert F. Kennedy, each civil rights heroes. 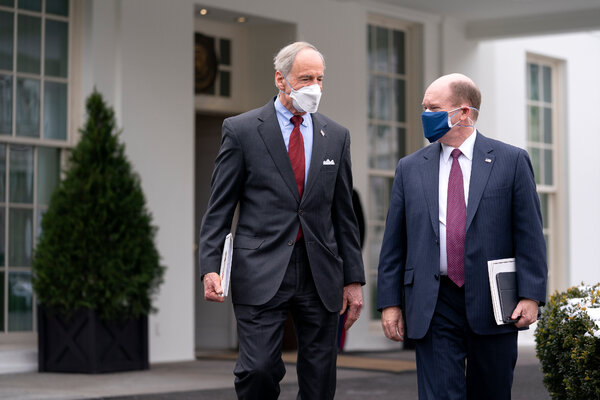 After talking with his colleagues, Mr. Coons said some of the younger Republican senators were “genuinely surprised” after meeting Mr. Biden, because they had a “two-dimensional picture” of him from conservative news media.

“They said: ‘He was so genuine. He was so welcoming, and he really knew his numbers,’” Mr. Coons said.

It was a far different experience than Mr. Coons had during his first lunch at the White House with Mr. Trump. “Within the first five minutes, he said some things that were so abrasive and so offensive I seriously considered getting up and leaving,” he recalled.

For long-serving senators, Mr. Biden’s rise to the presidency is in some ways akin to a hometown boy who has made it big. Unlike Mr. Trump — who showed little interest in lawmaking — or even former President Barack Obama, who spent only a short time in the Senate and had a frosty relationship with the Republican leader, Mitch McConnell, Mr. Biden’s six terms in the institution produced many deep and lasting friendships.

Few are more enduring than his friendship with Ms. Collins, who became an enemy of the left after her 2018 vote to confirm Justice Brett M. Kavanaugh to the Supreme Court, but was nevertheless re-elected easily in November to a fifth term.

During their years in the Senate, Mr. Biden and Ms. Collins worked together on the reauthorization of the Violence Against Women Act; traveled together to Rome for the funeral of Pope John Paul II in 2005; and were even once honored together as Irish-Americans of the Year.

In 2016, on the Senate floor, Ms. Collins rose to praise Mr. Biden, calling him a “good and decent man.”

“He is everybody’s friend but nobody’s fool,” Ms. Collins said.

The next year, Mr. Biden returned the favor, cutting a video for Ms. Collins praising her as she received the 2017 Claddagh Award from the Maine Irish Heritage Center.

“I’m crazy about her,” Mr. Biden said, before addressing Ms. Collins directly. “I’ve been lucky enough to call you a friend for a long, long time.”

Throughout his time in the Senate, Mr. Biden even forged a working relationship with the famously reserved Mr. McConnell of Kentucky. In 2011, they made a joint appearance at the University of Louisville.

“You want to see whether or not a Republican and Democrat really like one another,” Mr. Biden told the audience. “Well, I’m here to tell you we do.”

So far, the relationships have not translated into deal-making. Democrats now control both chambers of Congress, meaning Republicans have little leverage to force changes to Mr. Biden’s fiscal initiatives.

During the first meeting with Republicans, some of the senators left the White House sensing that Mr. Biden and his staff were engaged in something of a good-cop, bad-cop routine.

Several Republicans later said privately that they felt insulted by Mr. Biden’s chief of staff, Ron Klain, who repeatedly shook his head in disapproval as Ms. Collins and the other Republicans talked, said people familiar with their thinking, who detailed it on condition of anonymity.

“Our members who were in the meeting felt that the president seemed to be more interested in that than his staff,” Mr. McConnell told reporters of the possibility of bipartisanship.

That may be partly because the Senate that Mr. Biden remembers is very different from the Senate of today, which is known more for partisanship and paralysis than friendship and deals.

His relationship with Senator Lindsey Graham, Republican of South Carolina, reflects the evolution. The two were once fast friends, but as Mr. Graham embraced Mr. Trump ever more tightly, he leveled repeated attacks against Mr. Biden’s family and promoted false claims of election fraud.

On Sunday, Mr. Graham said he was focused on winning back the Senate in 2022 “to stop the most radical agenda I’ve seen coming out of the Democratic presidency of Joe Biden.”

Asked recently how he believed his old friend could work with the current Senate, Mr. Graham paused.

He said he doubted Republicans and Democrats would come together on the stimulus, but he thought there might be a possibility for some form of an agreement in the future. Maybe on something no one could object to, like infrastructure funding.

“I don’t know,” Mr. Graham said. “I would hope we can find some common ground.” 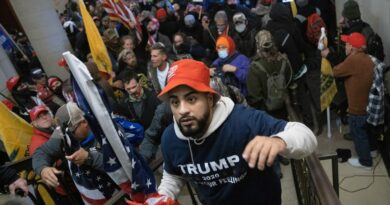 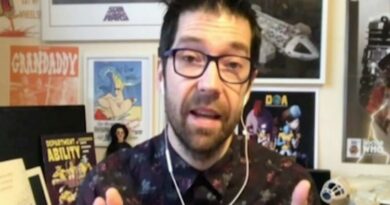