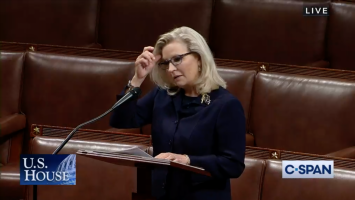 WASHINGTON – GOP House leaders’ decision to limit debate during Wednesday’s caucus meeting where Liz Cheney was ousted from leadership and then ditch secret ballots for an unrecorded voice vote angered lawmakers hoping they’d have one last opportunity to defend the Wyoming Republican.

House GOP Leader Kevin McCarthy, R-Calif., and Cheney spoke to the members before they were asked to verbally state their preference for keeping Cheney as chair of the House GOP Caucus or letting her go, according to those attending the closed-door meeting. Rep. Virginia Foxx, R-N.C., formally introduced the resolution to unseat Cheney,and in a matter of minutes she was removed from her post.

There were “people ready to go to battle for her,” Rep. Adam Kinzinger, R-Ill., a Cheney supporter, told USA TODAY after the caucus meeting.

In this video frame grab taken from C-SPAN television, House Republican Conference Chair Rep. Liz Cheney, R-Wyo., speaks on the floor of the House of Representatives in Washington, onTuesday May 11, 2021. House Minority Leader Kevin McCarthy, R-Calif., has set a Wednesday vote for removing Cheney from her No. 3 Republican leadership post after Cheney repeatedly challenged former President Donald Trump over his claims of widespread voting fraud and his role in encouraging supporters' Jan. 6 attack on the Capitol (Photo: C-SPAN)

Instead, what could have been a moment of sincere give-and-take turned into an episode of “fake unity,” he said.

The vote to jettison a three-term lawmaker with one of the most conservative voting records in the House is at least a temporary victory for Trump loyalists who grew tired of Cheney’s public excoriations about the former president’s unfounded claims the election was “stolen” from him due to widespread voter fraud.

Cheney referred to his claims as “the Big Lie” that helped stoke the Jan. 6 assault on the Capitol by a pro-Trump mob.

Had McCarthy stuck to GOP Conference rules and held the vote by secret ballot, there would have been a record of how many members sided with Cheney even if no names were attached. In February, the conference held a similar vote on Cheney after she was one of only 10 Republicans to vote to impeach Trump.

The Feb. 3 vote was by secret ballot, included speeches from various lawmakers and lasted well over an hour. “People were able to air their differences,” McCarthy, who backed Cheney then, told reporters when it was over. She survived that challenge to her leadership in resounding fashion: 145-61.

By going from a secret ballot, where members might feel freer to vote their conscience, to a voice vote, where members vocally express their support or opposition, means there’s no official evidence to indicate whether Cheney retained significant support Wednesday.

Rep. Ken Buck, R-Colo., who also did not support removing Cheney, told reporters after Wednesday’s meeting there was a question of “whether we could do a recorded vote” but it was not agreed to.

“To me” a debate is what “the Republican Party is all about,” Buck said. “This discussion is all about disagreement and coming to the best solution … I just think that we are healthier as a party, by having disagreements on issues.”

Casey Burgat, director of the Legislative Affairs program at George Washington University’s Graduate School of Political Management, said all the signs point to Republicans wanting to paper over their differences.

“The fact that it was voice vote. That it happened quick. They’re trying to portray that it was widely accepted, that there weren’t enough votes that wanted to voice opposition (to Cheney’s ouster) or any pushback to the party about the process or the speed. It was all but assumed,” he said. “We know that’s not true.”

Cheney has refused to go quietly even as she faced tall odds of staying in leadership.

Tuesday night, she was on the House floor calling out Trump once again and imploring her colleagues to reject his claims.

No. 3 House Republican Liz Cheney was clinging to her post Wednesday as party leaders lined up behind an heir apparent, signaling that fallout over her clashes with former President Donald Trump was becoming too much for her to overcome. (May 5)

McCarthy’s main criticism about Cheney was about the distraction he said she posed to the party’s effort to recapture Congress next year.

In a letter to Republican House members Monday, McCarthy wrote the party’s “driving focus would be taking back the House in 2022” and “internal conflicts need to be resolved so as to not detract from the efforts of our collective team … Having heard from so many of you in recent days, it’s clear that we need to make a change.”

Burgat said it’s not uncommon for parties to have deep divisions among members sometimes but that this episode has been different.

“They’re usually, in the pursuit of unity, discussed behind closed doors,” he said. “What is rare is the sniping at each other through the media at the leadership level.”

Buck pushed back on McCarthy’s argument that Cheney needed to be removed because her ongoing feud with Trump distracted from GOP efforts to win next year’s elections.

“To suggest that the American people in 2022 won’t consider the fact that we were unwilling to stand up to a narrative that the election was stolen, I think will be taken into consideration with their vote,” he said. 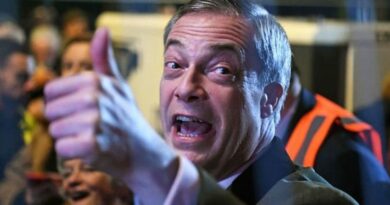 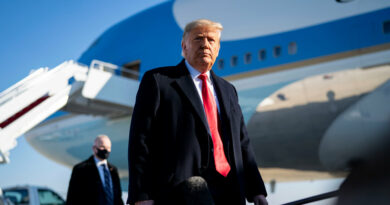 Trump Lashes Out At Fox News For Poll Showing Him Trailing Biden: ‘NO WAY’