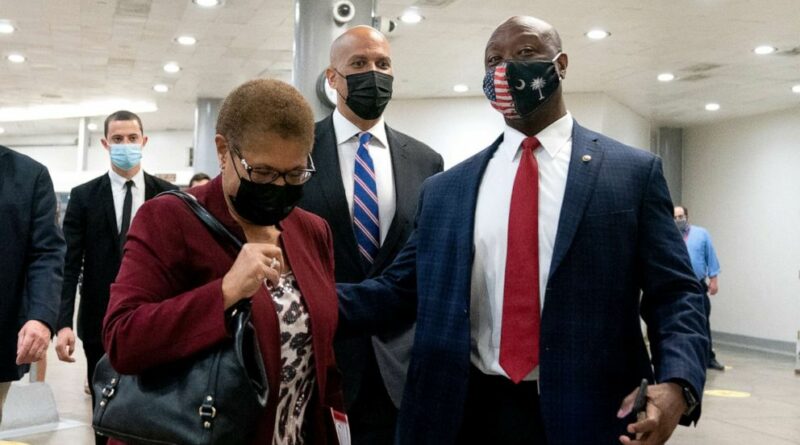 The three key bipartisan negotiators on policing reform met for an hour Wednesday and appeared to have hit a setback over whether officers should continue to be protected from civil lawsuits, after a House Democratic leader said this weekend that so-called qualified immunity could be left out of any compromise.

“Right now, especially on the House side, it’s our position that qualified immunity has to be eliminated,” said Rep. Karen Bass, D-Calif.

Sen. Cory Booker, D-N.J., added that he and Bass are “very determined” on stripping officers of legal protection from lawsuits.

South Carolina Sen. Tim Scott, the lead GOP negotiator, leaving the hour-long meeting by a exit different from Bass and Booker, when told of the congresswoman’s position, responded, “I’m on the exact opposite side.”

On Sunday, House Majority Whip James Clyburn — when asked if he would support a compromise that did not end the immunity protections — said, “I will never sacrifice good on the altar of perfect. I just won’t do that.”

“I know what the perfect bill will be. We have proposed that. I want to see good legislation, and I know that, sometimes, you have to compromise,” Clyburn, D-S.C., said on CNN’s “State of the Union.” “If we don’t get qualified immunity now, then we will come back and try to get it later. But I don’t want to see us throw out a good bill because we can’t get a perfect bill,” he said.

One Democratic source told ABC News that Clyburn’s comments “were really not helpful” to the bipartisan talks, seeing it as a chance to let Republicans off the hook on a thorny issue that civil rights activists have insisted be included.

Republicans, including Scott and Sen. Lindsey Graham, R-S.C., have floated a potential compromise to hold police departments accountable as opposed to individual officers.

But on Wednesday, Booker and Bass made clear that was not acceptable.

Other difficult sticking points remain, such as whether to lower the criminal standard for finding law enforcement officers guilty of depriving a person of his or her civil rights. Democrats want to see officers who act with “reckless disregard,” endangering another person, held criminally-liable, but Republicans have said that is a red line. They say they simply will not consider lowering the current standard requiring prosecutors to show an offending officer “willfully” deprived a suspect of his or her rights.

But Booker held fast to the principle that police officers who perform “heinous” acts must be held accountable.

“When you knowingly, willfully are violating somebody’s civil rights, that there’s a consequence for that. We need to make sure that when you do something that is heinous and violating in a criminal fashion the law, you don’t have a shield there either. This is about accountability for people that do very, very bad things,” said Sen. Booker.

“And the bottom line is we want to see these shootings stop,” said Bass. “How is that going to happen if officers are not held accountable? Qualified immunity is one issue, and the ability to prosecute an officer is another.”

Bass said some progress had been made on the issue of military-grade equipment being sent to local police departments, something else Democrats want to see ended.

“We’ve had some very fruitful discussions on that one. It’s not as big of a controversy as some other areas,” Bass said, without offering any detail.

Aside from legal protections and equipment, other sticking points include the creation of a national database to track police officers who break the rules.

The bipartisan group has met multiple times with pressure mounting for a compromise in the wake of a jury finding former Minneapolis Police officer Derek Chauvin guilty of murdering George Floyd.

And while President Joe Biden, in his joint address to Congress in late April, said he would like a deal by May 25, the first anniversary of Floyd’s death, negotiators said that is almost an impossible task.

“I think it’s going to be hard, but we’re committed to doing the work. We’re meeting regularly. It’s going to be very hard to get done before the end of the month,” said Booker. “We’re all trying to get it done as quickly as possible, but there’s no deadline for us.”

“We’re gonna keep talking until we get it across the finish line,” Bass said.