Federal authorities arrested a suspect in the U.S. Capitol riot in Harrodsburg, Kentucky, on Tuesday after they used facial recognition programs to find an image of him on his girlfriend’s Instagram page.

Stephen Chase Randolph, federal authorities say, knocked over a U.S. Capitol Police officer manning the barriers at the building, “causing [Officer-1]’s head to hit the stairs behind her, resulting in a loss of consciousness.” He then “continued to assault two other USCP officers by physically pushing, shoving, grabbing, and generally resisting the officers and interfering with their official duties,” the federal officials said.

The FBI released images of Randolph in late January, designating him as #168-AFO because he was wanted for “assault on federal officers.” Members of the loosely affiliated sleuthing group @SeditionHunters dubbed the suspect as #GrayCarharttHat, based on his knit cap, and published additional images of him.

At some point, the FBI ran an image of Randolph through an “open source facial comparison tool” that had been “known to provide reliable results in the past.”

“The facial recognition tool yielded results associated with the Instagram page of an individual (“Individual-1″) from Kentucky who appeared to be the girlfriend of the SUBJECT,” a FBI special agent wrote in an affidavit. “Individual-1′s Instagram account also contained a photograph of the SUBJECT (see Figure 11) wearing the same grey toboggan with white ‘Carhartt’ embroidered on the front” that was seen in videos at the Capitol.

The FBI then found Randolph’s Facebook page though his girlfriend’s Facebook account. On April 13, the federal authorities said, two FBI special agents went undercover at Randolph’s workplace and talked to him about the Capitol riot. Randolph, the feds said, said “shit went crazy” at the Capitol and that “it was fucking fun” to be a part of the mob.

“RANDOLPH opined that the female police officer likely had a concussion because she was curled up in the fetal position after being pushed to the ground,” the affidavit states. He was arrested one week after the FBI’s undercover visit. 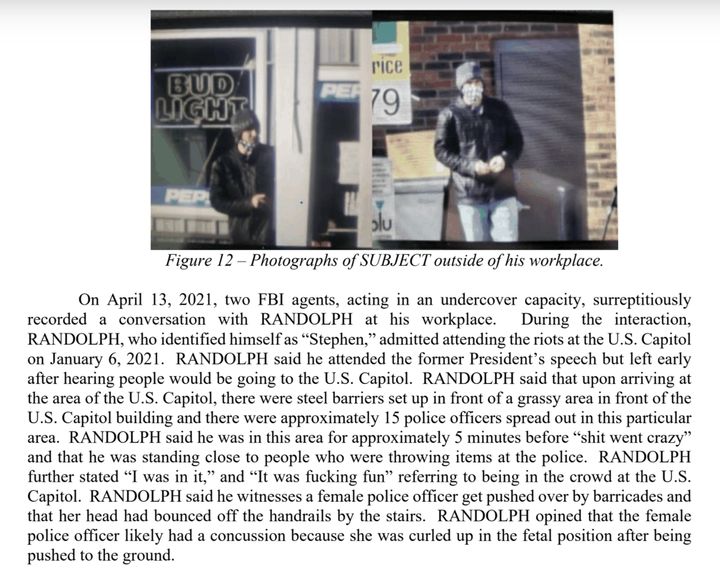 Facial recognition tools have played a big role in the Capitol riot investigation and have been used by online sleuths to identify potential suspects. The FBI had previously conceded that a prosecutors office in Maryland had used facial recognition technology to help the bureau identify Capitol riot suspect Robert Reeder, that the FBI used a “biometric search” to confirm the identity of Capitol defendant Mark Simon and an FBI special agent testified to using facial recognition technology to confirm the identification of Daniel Ray Caldwell at the Capitol insurrection.

But the case against Randolph is among the first high-profile acknowledgements that a facial recognition search ultimately led to a Capitol arrest rather than confirmed the identity of a suspect already on the FBI’s radar. In a recent case, the FBI claimed that “an image search” led them to Grady Owens’ Instagram page.

In Randolph’s case, the FBI is being upfront about the use of facial recognition technology.

Randolph is scheduled to appear Wednesday in court in Lexington before Magistrate Judge Matthew Stinnett of the Eastern District of Kentucky.