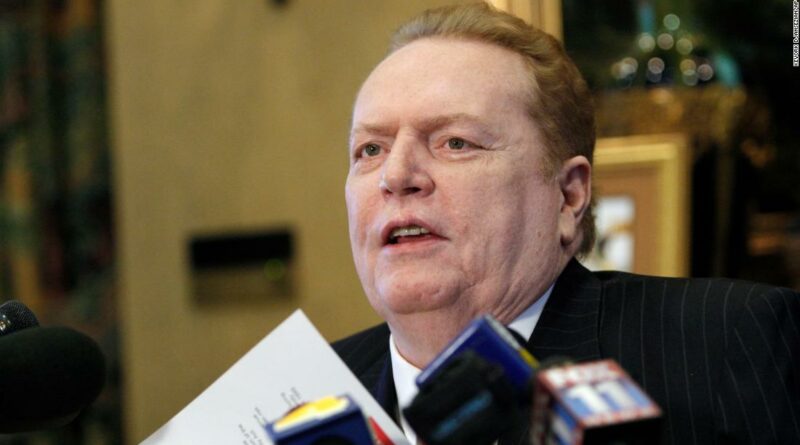 His exact cause of death was not disclosed, but Flynt Jr. said his uncle had been in frail health for much of the past 30 years and that his death was not related to Covid-19.
“Larry was a rebel. He had a very complex personality. That’s why they made a movie about it,” Flynt Jr. said about his uncle.

Flynt launched the pornographic magazine Hustler in 1974. A 2013 Hollywood Reporter profile of Flynt described Hustler as targeting a “more blue-color audience than Playboy,” which had started in 1953. Hustler became famous for its graphic and controversial images including rape and mutilation.
Flynt went on to found Larry Flynt Publications, which produced other pornographic magazines including Barely Legal and Beaver Hunt. He also started other businesses including the Hustler casino in Los Angeles.

In 1978, Flynt was shot and paralyzed from the waist down in an assassination attempt by serial killer Joseph Paul Franklin. In a 2013 interview, Franklin told CNN that he was upset after seeing an interracial couple photographed an issue of Hustler.
“It just made me sick. I think whites marry with whites, blacks with blacks, Indians with Indians. Orientals with orientals. I threw the magazine down and thought, I’m gonna kill that guy,” Franklin said.
Flynt ended up filing a legal motion with the American Civil Liberties Union requesting to stop Franklin’s execution, telling CNN that he was against the death penalty. “The government has no business at all being in the business of killing people,” he said.
Flynt became an outspoken supporter of First Amendment rights and won his most significant legal battle at the US Supreme Court in 1988 after televangelist the Rev. Jerry Falwell brought a libel case.
“I even took a bullet for the First Amendment,” Flynt said to CNN in 2003, calling himself a civil libertarian.
In 2012, Flynt wrote for CNN Opinion, “The best thing the arbiters of decency and good taste can do is to stay out of other people’s lives. The greatest right that any nation can afford its people is the right to be left alone.”
Flynt lived a difficult life after being shot, but one that was marked by tremendous success, his nephew said.

“He wanted to be remembered as a person who pushed the boundaries of free speech and that the First Amendment was the cornerstone of democracy,” Flynt Jr. said.
Flynt launched a brief presidential campaign, running against Ronald Reagan in the 1984 election. He later supported Democrats, including endorsing Hillary Clinton’s presidential run.
Source: Read Full Article

Gabbard dares Clinton to run for president in 2020, fights back against assertions that she is a Russian asset