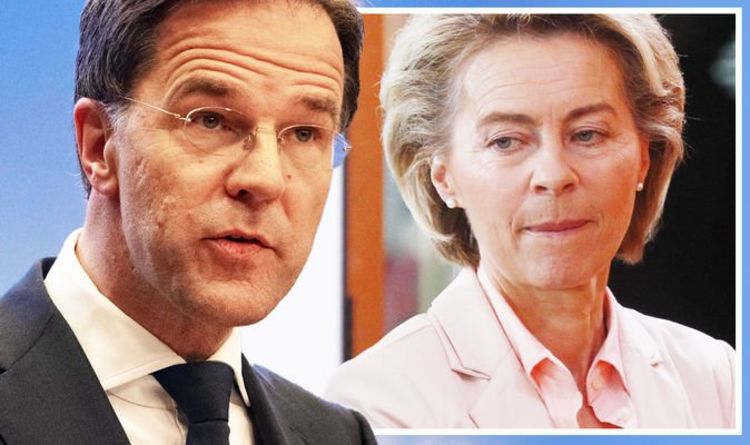 EU member states are preparing for a new battle as the bloc prepares to discuss the future of its fiscal policy once the suspension of the rules, introduced during the coronavirus pandemic, are lifted at the end of 2022. The plan, believed to be initiated by Italy and other southern member states, will be to fight to soften the strict euro stability criteria.

The goal is to transform the current temporary status quo into a permanent policy for the eurozone countries.

At the moment, the so-called stability pact limits the budget deficit of the euro countries to three percent of economic output and the total debt to 60 percent.

Rome wants to undermine the strict criteria. It is a plan heavily indebted Italy has been harbouring for many years but has regularly failed to press forward with due to the resistance of the northern European euro countries.

The outcomes of the German and French general elections will be crucial to establishing how strong the Italian position will be in Brussels.

But German economist Dr Lars P. Feld warned the northern country that should be particularly watched by EU chiefs in the upcoming clash is the Netherlands.

Speaking to Express.co.uk, the Professor at the Albert-Ludwigs-Universität Freiburg said the focus, when it comes to disagreements in the bloc on fiscal rules, has always fallen on southern states like Greece and the risk of such countries leaving the eurozone.

But he believes the Dutch pose a bigger threat this time around after showing to be particularly unhappy with the way the EU has handled the monetary rules during the pandemic.

He said: “We should be aware that there is a strong pressure from Southern European countries and France to have a permanent fiscal capacity at EU level.

“And it will be very difficult for the Northern European countries to oppose these pushes.

“There’s only one element of strong opposition that we should keep in mind: the Netherlands are not very happy with this Next Generation EU.

“So it should be expected that they are strongly against a permanent EU indebtedness.

“Discussing the integrity of the eurozone or the European Union, also against the background of Brexit, in the past, there was always a discussion that Greece or another Southern European country may finally decide to exit the monetary union.

“I think this is the wrong focus.

“The focus should be on the Netherlands. The Netherlands are not very happy with the with the steps towards EU integration recently taken.”

Asked whether he believed the Netherlands could be the next to follow Brexit Britain outside the bloc, or at least outside the eurozone, he replied: “Well, if they leave the eurozone it’s also going to be difficult for them in the EU.

“But I think we should be putting much more emphasis on observing the political situation in the Netherlands regarding further integration.”

EU Commissioner Paolo Gentiloni is also calling for the fiscal rules to be “adapted to the new realities”.

The former Italian prime minister and the current Italian leader Mario Draghi would only need a qualified majority to axe the rule.

Unanimity would instead be required to make changes to the Maastricht Treaty and the 60 percent criteria to be abandoned altogether.

The latter would remain, but only as an effective shell, as countries such as Italy, Greece, Spain or Portugal would no longer have any direct pressure from Brussels to consistently reduce their debts.

Who is Dominic Cummings? Boris Johnson hires Brexit mastermind to be No10 guru