Home » Politics » George W. Bush has message for Afghanistan War veterans: 'Nothing can tarnish your honor' 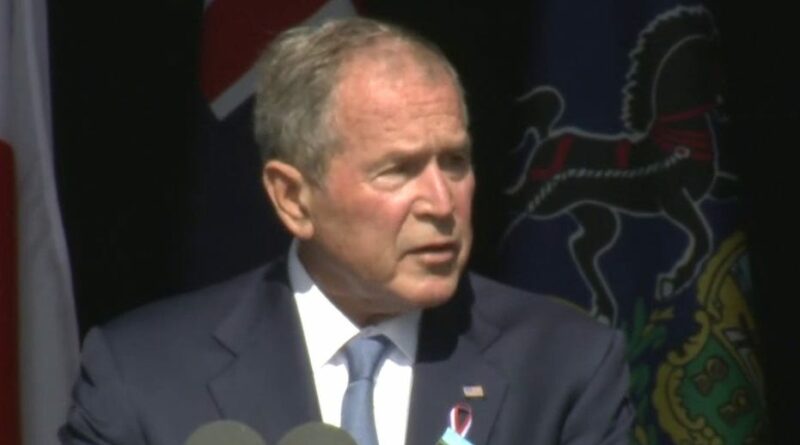 Former President George W. Bush shared a message with veterans and service members during his Saturday speech marking 20 years after the Sept. 11, 2001, attacks.

Bush spoke from the Flight 93 National Memorial in Stoystown, Pennsylvania, where he remembered some 3,000 people who lost their lives in four separate terrorist attacks on the most significant day of the 43rd president’s two-term presidency.

“After 9/11, millions of brave Americans stepped forward and volunteered to serve in the armed forces, and military measures taken over the last 20 years to pursue dangers at their source have led to debate,” Bush said. “But one thing is certain: we owe an assurance to all who have fought our nation’s most recent battles.”

Speaking directly to “veterans and people in uniform,” Bush continued: “The cause you pursued in the call of duty is the noblest America has to offer. You have shielded your fellow citizens from danger. You have defended the beliefs of your country and advanced the rights of the downtrodden. You have been the face of hope and mercy in dark places. You have been a force for good in the world. 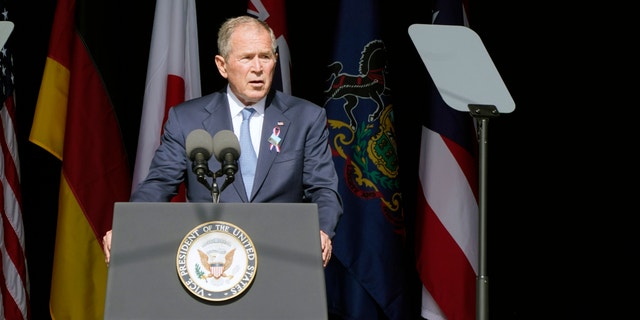 Former President George W. Bush speaks during a memorial for the passengers and crew of United Flight 93, Saturday Sept. 11, 2021, in Shanksville, Pa., on the 20th anniversary of the Sept. 11, 2001 attacks. (AP Photo/Jacquelyn Martin)

“Nothing can tarnish your honor or diminish your accomplishments to you and to the honored dead,” he said. “Our country is forever grateful.”

The former president’s speech then turned toward a message of unity, describing much of the nation’s politics today as “a naked appeal to anger, fear and resentment that leaves us worried about our nation and our future together.”

Bush concluded: “This is not mere nostalgia. It is the truest version of ourselves. It is what we have been doing and what we can be again.”

Bush is shown with retired firefighter Bob Beckwith (R) at the scene of the World Trade Center disaster on September 14, 2001. (REUTERS/Win McNamee-Files)

Military and government leaders have emphasized the message that service members’ efforts were not in vain in recent weeks since the last U.S. troops were pulled from Afghanistan before Aug. 31, allowing the Taliban to regain control of the country after two decades. On Aug. 26 — about three weeks before Sept. 11 — 13 U.S. service members were killed in an explosion in Kabul.

President Biden and Vice President Kamala Harris had similar messages of unity in their respective 9/11 speeches.

Harris joined Bush on Saturday morning in Pennsylvania, where she gave a speech remembering those who lost their lives 20 years ago.

“On the days that followed September 11th, 2001, we were all reminded that unity is possible in America,” Harris said. “We were reminded also that unity is imperative in America. It is essential to our shared prosperity. To our national security. And to our standing in the world. And by unity, I don’t mean uniformity. We had differences of opinion in 2001, as we do in 2021. And I believe that in America, our diversity is our strength.”

Biden shared a similar message of unity in a Friday night speech, saying that unity among Americans is “the central lesson of September 11th.”