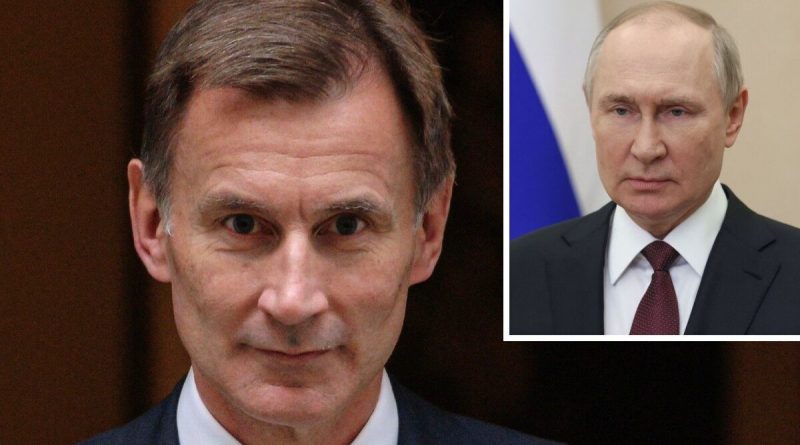 Jeremy Hunt has warned that help with energy bills will come to an end in 2024, urging the public to cut their energy usage to defeat Vladimir Putin. Speaking to the Treasury Committee today, Mr Hunt said “everyone” will need to play a part in reducing energy consumption. He suggested that the current support measures with energy bills will be scaled back in the future, warning that higher taxes are not “desirable in the long run”.

Mr Hunt said the current Energy Bills Support Scheme is projected to cost the taxpayer up to £120billion, warning that it would be removed in the spring of 2024.

The Chancellor called for a 15 percent decrease in energy consumption in order to help defeat Putin.

Mr Hunt told the Committee: “In the long run we’re going need everyone to help us crack this problem if we’re not going to have a huge additional burden on taxpayers which ultimately will lead to the kind of high taxes I certainly don’t believe are desirable in the long run.

“We will always be there to help poorer households, the way we do that will change.

“But for most people, we need you to play your part in reducing our energy dependency on what Putin chooses to do in Ukraine, that’s why we’ve got this national ambition to reduce energy consumption by 15 per cent.

“We’re a couple of per cent higher [than the EU] but other countries are doing the same kind of thing.

“That isn’t just at a national level but that’s for every household.”

He said that households could save themselves around £500 in the years to come if they hit that target, calling for people to “change their behaviour”.

The Chancellor announced a £55billion plan for tax hikes and public spending cuts in his Autumn Statement in the House of Commons last week.

Mr Hunt’s package included around £30billion in spending cuts and £24billion in tax rises over the next five years.

He announced that the energy price guarantee introduced during Liz Truss’s premiership would remain in place, increasing the cap from £2,500 a year now to £3,000.

This will mean that more Britons are likely to end up with more tax, as they will be dragged into higher bands as a result of soaring inflation.

Mr Hunt also announced a new windfall tax on energy firms, which will be used to help pay for Government support for household energy bills.

Despite previous Government objections to a windfall tax, Mr Hunt told the Commons: “I have no objection to windfall taxes if they are genuinely about windfall profits caused by unexpected increases in energy prices.

Taxes are set to rise to their highest level in relative terms since World War 2.

ANALYSIS: More than ever, Canada’s general election is a collection of polarized regional races