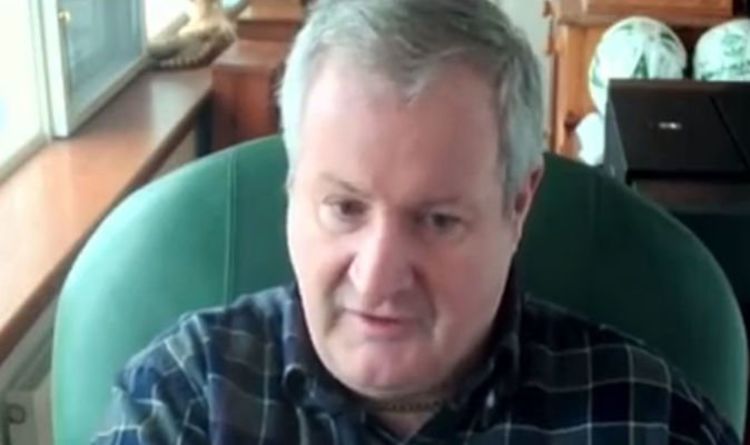 Ian Blackford has insisted for the second time that Boris Johnson should step down as Prime Minister following the party’s bruising defeat in the North Shropshire by-election. The SNP Westminster leader called for Mr Johnson to leave after his then press secretary Allegra Stratton and adviser Ed Oldfield, along with other aides, were filmed joking about a “fictional” party in December 2020. Speaking to LBC, Mr Blackford said: “I do think we have got a Prime Minister that has lost the trust of the people.

“Nobody is talking about an election that shouldn’t be happening at this stage.

“The reasonable thing to happen of the Prime Minister is to stand aside and the deputy would have to stand in for the interim period.

“I say this with no joy, I do believe the Prime Minister’s behaviour has been unacceptable and that’s across a wide number of things.

“His behaviour over the Covid Christmas parties, what’s happened over the refurbishment the flat in Downing Street.”

It comes as a prominent former member of the Conservative Party in Northern Ireland has called for Boris Johnson.

Alan Dunlop, a former chairman of the Northern Ireland Conservatives, made the call after Liberal Democrats won the North Shropshire by election by almost 6,000 votes.

The by-election was sparked by the resignation of former Northern Ireland Secretary Owen Paterson after he broke the rules on paid lobbying by MPs.

Mr Dunlop resigned from the party in October and has now warned that his former colleagues should expect “abject failure” in the next Stormont Assembly election in May.

“This by-election result was a damning indictment of the Prime Minister and senior party management.

“The Owen Paterson issue and the PM’s disregard of Covid rules created the perfect storm for this backlash.

“It’s all very well for the Prime Minister to take responsibility for this appalling defeat at the polls, but he has to go one step further and stand down to let his successor re-build trust with the electorate.

“It was clear to me when I resigned in October as chair and my membership of the party that things were on a slippery slope.

Betrayal! Fury erupts at Frost over ECJ [INSIGHT]
Forget Tory by-election defeat it’s labour that’s in trouble [COMMENT]
Boris will NOT be pushed out of N10 ‘for now’ despite fears [VIDEO]

“There was a disconnect between the honest, genuine Conservative volunteer worker on the ground and the upper echelon of the party.

“The Prime Minister has let down these sincere people.

“His behaviour has been appalling and it’s now time that he paid the price for his flagrant disregard of his own rules and guidelines.

“Northern Ireland Tories are being treated disgracefully with no authority to campaign, promote and challenge for fear of upsetting the Government’s ludicrous softly-softly approach to a dysfunctional Assembly and Executive.

“Five months out from an Assembly election, my advice to my former colleagues and friends is not to waste their money or energy on fighting a campaign that will end in abject failure.”

Georgia still has no hate crimes law despite many tries