After lying dormant for years, inflation is once again chipping away at American wallets, and it has become a chief concern for the White House.

In recent months, the Biden administration ramped up its efforts to remedy the supply-chain interruptions economists blame for hot inflation. And President Joe Biden has been pushing his economic agenda as a remedy for inflation worries.

But ask investors, economists and the American people for their thoughts on inflation, and no one sees inflation cooling off anytime soon. That means everyone from the president to the everyday voter will likely need patience to get through this.

"I don't think you want to promise people inflation is going away," said Jason Furman, an economist and former chairman of the White House Council of Economic Advisers during the Obama administration.

"I think the hardest thing to communicate is that not every problem has a solution. Some of what needs to be done to heal our economy is to be patient," he continued. "That's a really hard a message for any president to deliver. They have to be seen as doing things."

The politics of prices

Rising food and gas prices are weighing on Americans living on fixed or modest incomes. Retail grocery prices rose 1% in October, laundry and dry-cleaning costs are up 6.9% from a year ago, and in some parts of California gasoline is being sold north of $6 a gallon. General Mills notified retailers that it plans to soon hike prices on dozens of its brands, including Cheerios, Wheaties and Annie's, according to a report published Tuesday.

In turn, the inflation messaging coming out of the White House has focused a great deal on two big, Biden-backed bills. One of the president's favorite counters to inflation worries is to point out that many economists say his $1.75 trillion Build Back Better bill and a separate $1 trillion infrastructure plan will make businesses and workers more productive and ease inflation pressures over the long term.

Yet while better roads, access to child care and weatherization may help reduce costs years in the future, Democrats face critical midterm elections in less than 12 months.

Inflation appeared to be a hurdle for Democrat Terry McAuliffe, who lost to Republican Glenn Youngkin in Virginia's recent gubernatorial election.

Political strategists viewed that election as a gauge of voter attitude toward the current direction of policy with Democrats in control of the White House and Congress. The high-profile Democratic defeat in an increasingly blue Virginia is thought to have sparked compromise between party centrists and progressives on the infrastructure and anti-poverty and climate bills.

Americans' angst about the economy, as measured by the percentage of those surveyed who mention any economic issue as the top problem facing the U.S., reached a pandemic-era high according to polling firm Gallup. (The survey polled a random sampling of 815 adults, and it had a margin of error of plus or minus 4 percentage points.)

Twenty-six percent of Americans now cite an economic concern as the nation's top problem, while 7% say inflation, specifically, is their chief anxiety. In September, just 1% of Americans named inflation as their top worry, Gallup said. It has been more than 20 years since inflation was named as the most important problem by at least 7% of Americans.

"Moms and dads are worried, asking, 'Will there be enough food we can afford to buy for the holidays? Will we be able to get Christmas presents to the kids on time?'" Biden said in a speech on Tuesday.

No major impact on gas

To help ease fuel costs during the holiday season, Biden announced that the U.S. and some of its allies will tap their national strategic petroleum reserves.

"The fact is we've faced even worst spikes before just in the last decade," Biden said of rising gas prices. "But it doesn't mean we should just stand by idly and wait for prices to drop on their own."

While the Biden administration said it would put 50 million barrels of oil from government stockpiles onto global markets in the coming weeks, some analysts warned the action likely amounts at best to an attempt to pacify consumers.

Tapping the nation's oil reserves will have a limited impact on fuel costs since "nearly 40% of the 50MM bbl release was already planned for 2022 as well as the fact that much of the oil will simply go into commercial stockpiles," wrote Tom Essaye, founder of Sevens Report, a markets research firm.

That oil will eventually be repurchased "and later returned to the SPR, meaning the move is largely symbolic and not going to have a major impact on the actual physical markets," he added.

Furman, who teaches economics at Harvard University, agreed. He said that drawing on the SPR falls into the "no-stone-left-unturned" category for a White House worried about the political impact of rising prices.

The current inflation, he said, is a function of broad shifts in aggregate demand and aggregate supply — beyond the influence of a one-time appeal to the SPR or any other quick fix.

A pesky characteristic of inflation is that today's price increases are a product of what people think prices will be tomorrow. In other words, inflation expectations can, by themselves, cause inflation.

According to New York Federal Reserve Bank's most-recent consumer survey, median inflation expectations in October increased to 5.7% for the coming year, the highest level ever recorded since the series began in 2013.

A measure of investors' expectation for inflation over the next five years has spiked in recent months.

The difference between the yields on five-year Treasury inflation-protected securities, or TIPS, and the corresponding Treasury notes hit 3.17 on Wednesday, its highest level since at least 2003. That effectively means that investors think inflation will average about 3% over the next five years.

The recent uptick in market-based inflation expectations drew the attention of Federal Reserve officials during their November policy meeting. Their meeting minutes, released Wednesday, showed that some central bankers considered the jump as evidence that rising inflation forecasts are starting to go mainstream.

"A couple of participants pointed to increases in survey- and market-based indicators of expected inflation—including the notable rise in the five-year TIPS-based measure of inflation compensation—as possible signs that inflation expectations were becoming less well anchored," the Fed minutes read.

"I've been teaching my students the model that would have helped them predict inflation this year. And that model is that, if you're way short in demand, then extra demand can help," he said.

"But if you try to push it too far, you run into a supply constraint," he continued. "You'll end up with higher prices rather than higher quantities."

Giuliani tries clearing up controversial CNN interview, says idea he set out to get Biden is 'ridiculous' 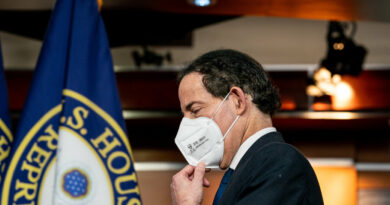