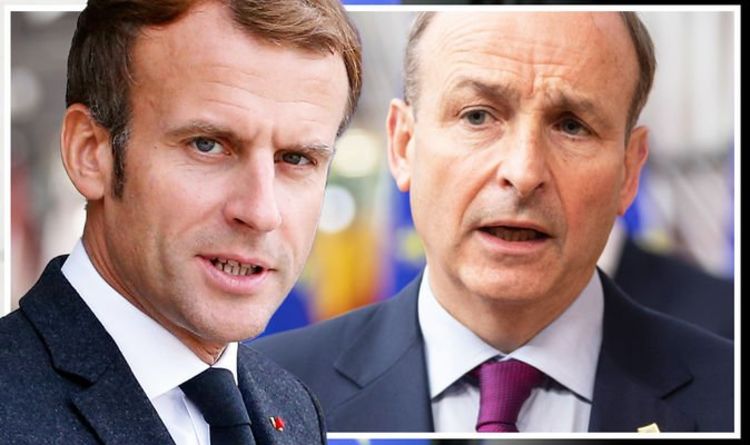 But Ray Bassett, Ireland’s former ambassador to Canada, Jamaica and the Bahamas, believes “deluded” efforts by Paris to ditch a language which, despite Brexit, remains very much at the heart of the bloc are doomed to fail. Almost 40 French politicians are backing the idea, arguing Britain’s decision to quit the EU means English should no longer be one of its official languages, along with French and German.

With the UK no longer a member, Ireland is the only country that has English as its first language – but English is commonly spoken in many of the EU27 countries, especially in eastern Europe, as well as in Scandinavia.

Mr Bassett, an advocate of Ireland following Britain’s example with a so-called Irexit, told Express.co.uk: “The French are at it again, plotting the demise of the English language in the EU.

“The French Parliamentary Committee on European Affairs is to consider a new demand that the French Government pursue a policy of making French the sole working language of the EU Institutions.”

Mr Bassett added: “This is a classic piece of French arrogance, since German is spoken by more EU citizens than French and Spanish is a much more important language internationally.

“However it is symptomatic of the French view that France is the centre of Europe and the other countries are all of lesser importance.”

For Ireland, any threat to the use of the English language in the EU would pose a big problem, given what Mr Bassett described as “the poor linguistic skills of Irish politicians and officials”.

Nevertheless, he added: “I believe that the French efforts will be rebuffed by the other 26 countries.

“It is not possible to turn back the clock to the 1960s when French was the dominant language in the then EEC.

“However Ireland needs to avoid being complacent and strongly resist this piece of French self-delusion.”

Julien Aubert, who is a member of France’s Republican party, has tabled a resolution for the French committee on European affairs in the French National Assembly.

Speaking to the Telegraph at the weekend, he said: “The United Kingdom’s exit from the European Union is a unique opportunity to reverse this trend.

“Once the United Kingdom has left the European Union, there is no longer any reason why the institutions of the Union should be so imbued with Anglo-Saxon culture.

“English is now the mother tongue of just one percent of the population of the EU, while French is the second language of many members and is the most-practised foreign language, after English.”

In order for Mr Aubert to get his way, the move would need to be backed by French President Emmanuel Macron.

Even then, as indicated by Mr Bassett, it would need the support of all other member states.

In 2017, former European Council President Jean-Claude Juncker disdainfully suggested English as “less important as it was”.

However, speaking to Express.co.uk last year, Mark Littlewood, director-general of the Institute for Economic Affairs, said any attempt to downgrade its importance would be a grave mistake on the part of the EU.

He explained: “English is increasingly the global language of commerce.

“The European Union has got an interesting question facing it.

“Does it remain largely bilingual, despite the fact that the only native English speakers will be the very small Republic of Ireland?

“Or does it sort of put two fingers up to the English-speaking world and say ‘no we’re going to do everything in French?”