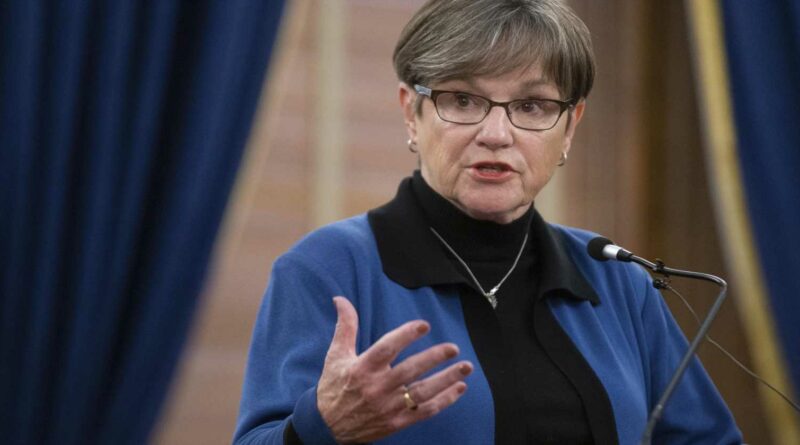 TOPEKA, Kansas — Gov. Laura Kelly vetoed two Republican-backed election bills on Friday, including one that would have limited most individuals to delivering 10 ballots during each election and another that would have barred the governor, secretary of state or the courts from changing election rules.

When Republicans pushed the bills through the Legislature earlier this month, they had the two-thirds majority needed to override a veto in the Senate but was four votes short in the House on the ballot-collection bill. The election rules bill also reached large enough margins for override attempts to succeed in the Senate, but was one vote shy in the House.

The ballot-collection legislation would have made it harder for groups or people not related to voters to deliver their absentee ballots to election officials. It would have also required candidates to deliver ballots only from immediate family members, reining in practices that some Democrats and groups have used for years to help poor, elderly and disabled voters.

“Although Kansans have cast millions of ballots over the last decade, there remains no evidence of significant voter fraud in Kansas,” the Democratic governor said in a statement. “This bill is a solution to a problem that doesn’t exist. It is designed to disenfranchise Kansans, making it difficult for them to participate in the democratic process, not to stop voter fraud.”

Republican lawmakers said they’re protecting the integrity of the state’s elections by making it less likely that ballots will go missing or get altered.

The ballot-collection bill would have also helped Republicans with a key policy goal: saving state abortion restrictions endangered by a Kansas Supreme Court decision in 2019 protecting abortion rights. GOP lawmakers were joined in efforts to revise election laws by abortion opponents who fear that abortion-rights canvassers could collect thousands of ballots to defeat a proposed anti-abortion amendment to the state constitution on the August 2022 ballot.

Georgia has been ground zero in a national fight over election laws, but it also has come to states that ex-President Donald Trump won, including Florida, Iowa, Kansas and Montana. Iowa last month enacted a GOP-backed law that makes it harder to vote early, potentially disadvantaging Democrats.

For subscribers: ‘A little bit of healing to do’: Georgia Republicans look to mend after months of division

The issue also is before the U.S. Supreme Court, which is considering the constitutionality of an Arizona law enacted by Republicans there in 2016 limiting who can return ballots.

More than half of states, including Kansas, allow a third party, nonrelative to collect ballots and deliver them to election offices, though a dozen of those put limits on how many, according to the National Conference of State Legislatures.

Kansans for Life, the state’s most influential anti-abortion group, and the conservative Family Policy Alliance of Kansas, also backed the bill.

Republicans argue that the more ballots someone can deliver, the greater the chance that some will get lost — or deliberately altered or misplaced. While they’ve pointed to examples of Democratic candidates in Kansas collecting ballots, they’ve yet to present evidence that it led to fraudulent votes.

But some cite a North Carolina scandal that overturned a 2018 congressional election, in which a GOP operative was accused of having workers collect incomplete or blank absentee ballots. A few even point to a controversy in Democratic-led California, where Republicans faced allegations of setting up illegal ballot drop boxes.

Rep. Blake Carpenter, a Republican from Derby and a main proponent of both bills, said he thinks it won’t be difficult to override Kelly’s veto on the election rules bill since it was only one vote short of the required supermajority in the House. Three Republican House members were also absent for the final vote on the bill, he said.

Carpenter said he also looks forward to working with Republican legislators to override Kelly’s veto of the ballot-collection bill.

“The governor said that this is a problem in search of a solution, or that we don’t really need this legislation,” Carpenter said. “However, I think that this legislation directly impacts what future elections could look like because of the issues we saw in those other elections and other states.”

Democrats counter with cases of voters who don’t have reliable transportation or who wait to vote until the mail might not deliver an absentee ballot on time.

The other bill Kelly vetoed would have prevented the governor from changing election laws or procedures by issuing executive orders. That bill would have also barred the secretary of state from entering into consent decrees with state and federal courts to enforce or change election rules without approval from Kansas legislators.

Some Republicans who supported the election rules measure criticized governors in other states who delayed presidential primaries due to COVID-19. Last year, Kansas Secretary of State Scott Schwab was questioned about whether he would call for an all-mail ballot election, an idea Schwab opposed.

Andy Tsubasa Field is a corps member for the Associated Press/Report for America Statehouse News Initiative. Report for America is a nonprofit national service program that places journalists in local newsrooms to report on undercovered issues.