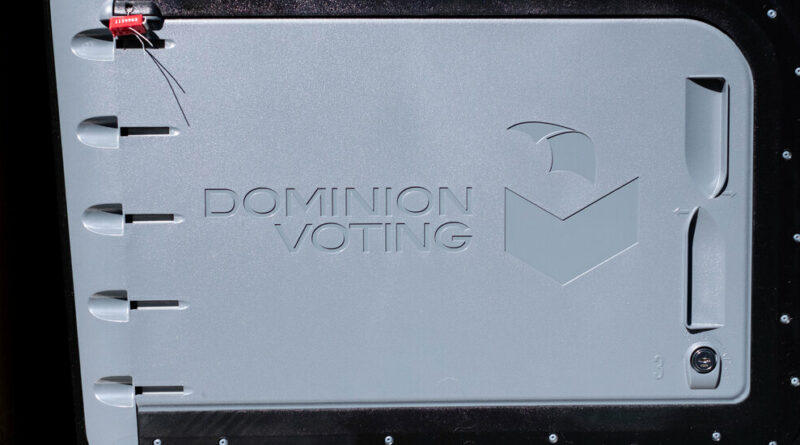 In a statement posted on its website, Newsmax acknowledged that it had found “no evidence” for the conspiracy theories advanced by Mr. Trump’s lawyers, supporters and others that the employee, Eric Coomer, had manipulated Dominion voting machines, voting software and the final vote counts in the election.

“On behalf of Newsmax, we would like to apologize for any harm that our reporting of the allegations against Dr. Coomer may have caused to Dr. Coomer and his family,” the statement said.

Mr. Coomer, director of product strategy and security for Dominion, sued Newsmax and several pro-Trump figures in December, after he had been roundly vilified in the right-wing media sphere. In his lawsuit, which also names the Trump campaign, Rudolph W. Giuliani and the One America News Network, Mr. Coomer claimed that he had suffered harm to his reputation, emotional distress, anxiety and lost earnings as false accusations spread throughout the pro-Trump world that he was plotting to rig the election.

Among the accusations was a claim that Mr. Coomer had said on a phone call with antifa activists that he would ensure a victory for Joseph R. Biden Jr., the lawsuit said. In fact, Mr. Coomer did not participate in an “antifa conference call” and did not take any action to subvert the presidential election, the lawsuit said.

And Sidney Powell, who was also one of Mr. Trump’s lawyers, replied, “Yes, it’s true,” on Newsmax when she was asked if Mr. Coomer had said, “Don’t worry about President Trump, I already made sure that he’s going to lose the election,” according to the lawsuit.

As a result, Mr. Coomer received an onslaught of offensive messages, harassment and death threats, according to the lawsuit, which names Ms. Powell as a defendant.

“These fabrications and attacks against me have upended my life, forced me to flee my home, and caused my family and loved ones to fear for my safety, and I fear for theirs,” Mr. Coomer wrote in an opinion column published in The Denver Post in December.

In its statement on Friday, Newsmax said it wanted to “clarify” its coverage of Mr. Coomer.

Mr. Coomer’s lawyer, Steve Skarnulis, said he could not comment on the statement, “as the terms of settlement are strictly confidential.”

“Our statement on the website is consistent with our previous statements that we have not seen any evidence of software manipulation in the 2020 election,” a Newsmax spokesman said.

In December, Newsmax posted a statement renouncing a number of false claims about Dominion and Smartmatic, another election technology company that had become the focus of conspiracy theories. The statement came after Smartmatic said it had sent Newsmax legal notices and letters demanding retractions for publishing “false and defamatory statements.”

Newsmax’s statement acknowledged that “no evidence has been offered that Dominion or Smartmatic used software or reprogrammed software that manipulated votes in the 2020 election.”

In February, a Newsmax host, Bob Sellers, cut off Mike Lindell, the chief executive of MyPillow and a vociferous Trump supporter, when he began attacking Dominion on air. As Mr. Lindell continued to talk, Mr. Sellers read a prepared statement saying the election results had been certified in every state.

“Newsmax accepts the results as legal and final,” Mr. Sellers said. “The courts have also supported that view.”

Mr. Coomer’s lawsuit, which had been filed in Colorado, is separate from a number of lawsuits that Dominion Voting Systems has filed against Fox News, Mr. Giuliani and Mr. Lindell.

Jim Breslo: Why should government get involved in health care for people who don’t need assistance?