The Tories will later today bring forward a crunch debate and vote in the Scottish Parliament after Scotland’s Lord Advocate announced the plans last week without any scrutiny. Under SNP plans, police officers will be given the power to hand out warnings to anyone in possession of drugs rather than seeking prosecution.

Last week in Holyrood, Dorothy Bain QC announced the scheme in which Police Scotland officers can give those in possession of Class B or Class C drugs an official warning would be extended to include Class A substances.

However, it would depend on the discretion of individual officers and could still see those in possession of drugs prosecuted.

SNP ministers say the move will help address the drugs death crisis gripping Scotland, which claimed the lives of 1,339 people in 2020.

Scotland also continues to have the worst drug death rate in Europe, with 21.2 deaths per 1,000 of the population.

This is more than three-and-a-half times higher than England and Wales with the issue being dubbed “Scotland’s shame.”

The move has been called “de facto de-criminalisation” by the Scottish Tories with opposition parties arguing it would not fix the issue.

“Our debate will be the first opportunity to put these dangerous proposals under scrutiny.

“Our debate on Wednesday will give parliament a say and is a chance for MSPs to take a stand against the interests of drug dealers and vote down this radical overhaul.

“Anyone struggling with an addiction deserves a right to rehabilitation.

“We will put forward the case for putting rehabilitation and public health first, not drug dealers’ wallets.”

He added: “Drug deaths are Scotland’s shame and have occurred on the SNP’s watch.

“They have risen every year since Nicola Sturgeon became First Minister in 2014.

“It is a scandalous situation that deserves proper leadership from the SNP, and it was shameful that last week they passed the buck to the Lord Advocate to announce the biggest shift in drugs policy since devolution.”

But Annemarie Ward, spokesperson for Faces & Voices of Recovery UK, part of a worldwide policy advocacy movement that is taking on issues of discrimination of drugs welcomed the move.

She said: “Diversion from prosecution will prevent many people who really need help and support from being forced through our criminal justice system.

“It should allow people who are caught in addiction to get into treatment, instead of being sent to jail.

“However, we have to be very careful not to view this as a silver bullet.” 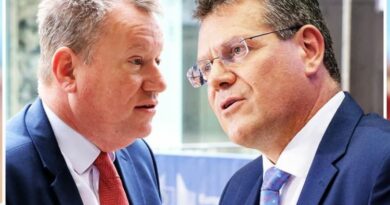 Britain is changing but we CANNOT abandon our towns, says ANDREA JENKYNS