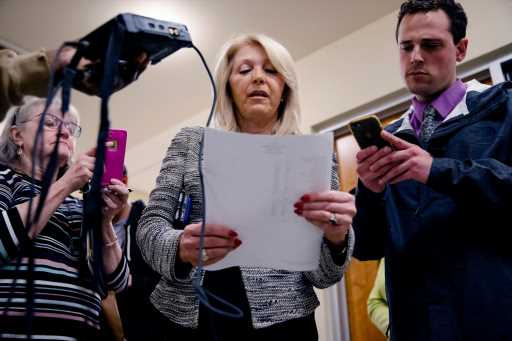 DENVER — Mesa County has occupied an uncomfortable place in the national spotlight since last summer, when security information from the county’s voting machines was leaked to a right wing website.

Months into this unfolding saga, the fallout is still ongoing, complicating life for elected officials on the Western Slope and raising one big unanswered question: What will happen with next year’s election — and who will oversee it?

“It all happened in a big rush.” He can’t even remember who first called to notify him, but said the message was blunt. ‘“Hey, your secret passwords for your Dominion machines… they’re posted on a national conspiracy operation.’”

What state investigators quickly pieced together was that Mesa’s Clerk and Recorder, Republican Tina Peters, had let an unauthorized person access the voting machines and be present for a secure software system update. That individual made copies of hard drives and took pictures — and now those images were up online.

What happened after the news broke, McInnis said, was a cascading series of mini crises. The machines were decertified, leaving county commissioners to quickly replace them before the November election. And then there were all the legal questions — and fights — to navigate.

All of that legal time and other safeguards comes with a cost, which McInnis estimated could top a million dollars for what he called Peters’ “little fishing expedition.”

But McInnis said what’s been most upsetting to him is that the security breach has encouraged people to believe Mesa County’s 2020 election was corrupt.

“I know some good people that really believed it,” he said, “and it caused a disruption in their lives.”

“Not a good look for us”

Over the past few months, Peters and her supporters have attended county commission meetings, voicing their disdain for the commissioners. The situation — it would appear — has resulted in a major breakdown in the regular relationship between the clerk’s office and the commissioners.

In this solidly red region, the fight is happening within the GOP; Peters and all three commissioners are Republicans, as is the county District Attorney leading the criminal investigation into the security breach.

“It creates a problem for us as a party,” said Mesa County GOP Chair Kevin McCarney. “Having the county commissioners and the county clerk at each other’s throat, is not a good look for us. And it’s both sides’ fault. I’m not gonna lie. Both sides are at fault in this.”

He added that it’s not a good way to run a county.

County commissioner Janet Rowland believes there are a lot of other pressing issues in Mesa County that need to be addressed, from schools and infrastructure to social services — but Peters’ actions and ongoing remarks about it have absorbed a lot of the public’s attention.

“There’s never been one person called when one child has died in Mesa County. So why they get upset about this and not some of the things that actually are real and matter, I don’t know. But I wish there was a little outrage about that.”

Questions of trust, and authority

Commissioner Cody Davis, who won his seat in 2020, said that he’d heard so much mistrust about the presidential race that in January he urged Peters to recheck Mesa’s results and settle the rumors, and she talked him out of it.

“She’s the one that said we could actually trust our elections. She convinced me that our elections are completely trustworthy. She went through the entire process,” he recalled. “So how she got from there to here, I will never know.”

Davis has met regularly with Peters and her supporters to hear their arguments — he said he tried to keep an open mind, but has come to think Peters is just wrong.

“She has not brought any information that has risen to the level of fact. It’s all speculation, rampant speculation.”

Peters did not respond to a request for an interview for this story, but told CPR News earlier that she believes the data copied from the county machines does show evidence of fraud.

“I think people’s faith in elections nationwide has been shaken,” she said. “It’s just that it took a small town — and there’s other small towns — exposing this in a lot of different ways, that people need to wake up to.”

Peters’ lawyer submitted an 82-page report that showed thousands of files were deleted during the software update. The state has explained that those files were routine logs of past activity and not actual election records. A required post-election audit conducted last year under Peters’ oversight found no irregularities with the 2020 tally.

The FBI and state officials have been investigating Peters and others involved in the security breach since last summer, an effort that recently escalated when law enforcement searched several homes in November. So far, no criminal or civil charges have been filed.

“It’s the rare case that facts are not disputed,” said Mesa County District Attorney Dan Rubenstein. “I think there are some facts which will be disputed, but the vast majority of them will come down to whether or not Tina had the authority to do these things.”

Peters has argued repeatedly that as elected clerk she does have that authority and stands by her actions.

“I have attempted to investigate the results of the elections, a duty that I have to my constituents,” she told CPR. “They were coming to me.”

The ongoing investigation into Peters also complicated Mesa’s recent November election; a court banned Peters from overseeing it and the county had to turn to outside help to manage the office’s career staff.

The whole thing has been a rollercoaster for the employees and volunteers who handle Mesa County’s elections.

Stephanie Wenholz, Mesa County’s elections manager, choked up talking about the effort they put in to pull off the November vote.

“We take pride in what we do. We have a great team. We had a great team this year,” she said.

“I think that’s the main thing that I want people to understand, that their community members are still coming out, making sure that the elections are safe, secure, (and) that they can believe in them.”

The county recently completed a hand recount, and in January will re-run all of the paper ballots through the machines of Dominion’s competitor, Clear Ballot, to verify that the original tally was correct. The county is also in the process of posting all ballot images online.

“I’m thrilled with both the speed and the accuracy of the results,” said Mesa County’s designated election official Wayne Williams of the hand count. “Even the largest variation was less than a tenth of a percent, which demonstrates the accuracy of Mesa County’s Dominion paper ballot system. To put this into perspective, a difference five times this size is necessary to trigger an automatic recount under Colorado law.”

The extra checks on the fall election — and the fact that Republican candidates did quite well — have won over even some of those convinced that the 2020 results were manipulated.

Conservative political activist Nova Tucker is a close friend and ally of Peters and worked to help elect conservative school board candidates. She trusts the results for a simple reason:

But that doesn’t give Tucker confidence in the overall election system. She calls this year’s security a temporary “pass” and worries about the upcoming midterms.

It’s unclear at this point whether Peters will be allowed to oversee that election. The court order against her only applied to this year. But she will be involved one way or another; Peters is up for reelection in 2022, trying to win another four year term as clerk.

“If people don’t want me in this office — which I get lots of cards and letters praising me on what I’m doing — then when the 2022 election comes around, they can vote me out,” said Peters. “I only want to be here to serve the citizens of Mesa County as long as they’ll have me.”

Maryland to drastically reduce number of polling places in November, despite gov's concerns of disenfranchisement

Labour crisis: Corbyn branded ‘worst leader Labour has ever had’ by his own MPs