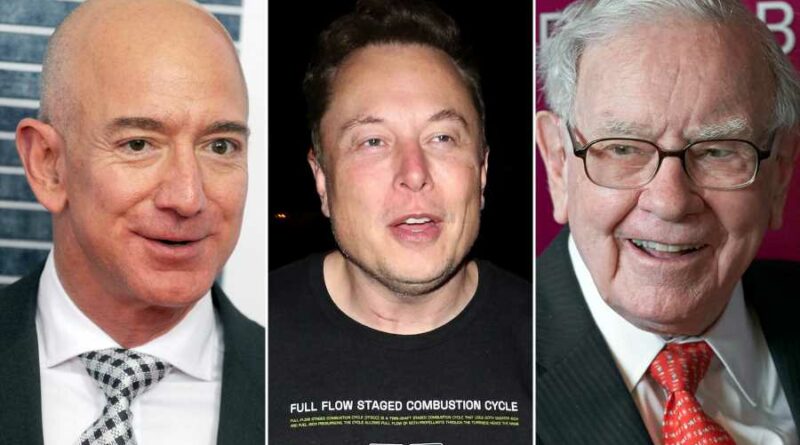 Anyone living in America knows that billionaires don’t pay their fair share in taxes. But extraordinary new documents obtained by ProPublica prove it in never-before-seen detail. The public-interest news organization has secured a massive trove of private tax information about some of the richest people in America, including Amazon founder Jeff Bezos, magnate and investor Warren Buffett, Tesla CEO Elon Musk, Microsoft co-founder Bill Gates, Facebook’s Mark Zuckerberg, and right-wing media mogul Rupert Murdoch. The documents trace how these men pay paltry sums in federal income tax, even as the value of their equity holdings soars by the billions.

ProPublica isn’t disclosing how it got its hands on the stunning array of tax information, which, its reporters write, “was given to us in raw form, with no conditions or conclusions.” The newsroom made the decision that the value of publicly disclosing it — amid intense scrutiny of wealth inequality in America — trumped the privacy interests of the people whose tax information is being made public.

The news organization makes plain that most of the tax avoidance it documents is perfectly legal. It’s simply that the richest are benefiting from a tax system rigged wildly in their favor. The ins-and-outs of taxation can be eyeglazing. But the gist of how the richest avoid taxes is simple: They earn relatively very little of their money as wage income, which is taxed according to the income tax brackets most of us are familiar with.

Instead, their fortunes consist predominantly of stock holdings that can — and have — appreciated extravagantly without being taxed. Under our current tax laws, these investment holdings are only taxed when sold. Average Americans benefit from this tax break too.

But for the billionaire class, there are ways to effectively turn that wealth into income, while actually getting a tax deduction. A billionaire CEO’s equity — in Amazon or Tesla or Facebook — can be used as collateral for very low interest loans. That’s money to spend on megayachts and estates and other billionaire extravagances. But that money is not taxed. In fact, the interest paid on those loans can often be recorded as a tax deduction.

The ProPublica investigation examines what it dubs the “true tax rate” of these billionaires, measuring their explosive gains in wealth against the taxes they paid on wage income and dividends (cash that corporations pay to shareholders). To be clear, this is a bit of a conceit. ProPublica is effectively arguing that, for the uber rich, rising wealth should be taxed annually like other sources of income are by the IRS. And it’s hard to read this investigation without coming to the conclusion that a fair tax system would indeed include a mechanism to tax such explosions of wealth.

Warren Buffett, the CEO of Berkshire Hathaway, makes an interesting case study, because he has gotten a lot of positive publicity for promoting the so-called Buffett Rule, which would create a minimum income tax rate of 30 percent for millionaires. But here’s the twist. Buffett makes very little in income, relative to other mega-billionaire executives. One reason is that Berkshire Hathaway doesn’t pay dividends to shareholders — opting to reinvest excess profits instead.

ProPublica looked at the appreciation of billionaire wealth from 2014 to 2018. Over that time Buffett’s wealth soared by more than $24 billion, and he reported income of $125 million — a huge figure in absolute terms, but minuscule compared to others in his echelon, like Mike Bloomberg who declared $10 billion. Buffett paid only about $24 million in taxes. ProPublica calculates his taxes paid as a percentage of his gain in wealth, and finds Buffett paid a “True Tax Rate” of just 0.10 percent. For his part, Buffett has been open about how the American system favors the richest, arguing in 2011, “There’s been class warfare going on for the last 20 years, and my class has won.”

The ProPublica investigation shows just how much letting the billionaire class live untaxed is costing the country. The 25 richest people were worth $1.1 trillion at the end of 2018, it writes. It would take the annual pay of “14.3 million ordinary American wage earners put together to equal that same amount of wealth.”

From the average wage earners, the federal government would have collected $143 billion. The billionaires in question paid only $1.9 billion to the IRS that year.

The ProPublica investigation is ongoing and will likely continue to spur public debate. But this is an extraordinary first installment. You should read every word of it.