LONDON — China is increasingly aiming to infiltrate and coerce on the global stage with its operations becoming more like those associated with Russia, according to a recent report by a think tank linked to the French military.

The French Military School Strategic Research Institute, an independent unit of the country's armed forces known as IRSEM, said it had noted a change in Beijing's behavior.

"For a long time, we could say that China, contrary to Russia, sought more to be loved rather than feared," the report, published last week, said according to a CNBC translation.

But it adds that Beijing's "operations to influence have been considerably stepped up over the past years and its methods look more and more like those applied by Moscow." The research paper, over 600 pages in length, was authored by Paul Charon and Jean-Baptiste Jeangene Vilmer, experts in Chinese politics and foreign affairs.

The Chinese embassy in London was not immediately available for comment when contacted by CNBC on Wednesday.

The French report outlines different areas where Chinese authorities have looked to extend power. These include the media, where China has invested 1.3 billion euros ($1.52 billion) per year since 2008 "to better control its image in the world."

In addition, the report also claims that Beijing has tried to influence the outcome of elections over the past decade — reportedly in at least 10 elections in seven countries. This is something that U.S. intelligence officials have also blamed Russia for, notably during the 2016 presidential election in the United States.

The theme of coercion in international relations was also mentioned earlier this week by the leaders of the United States, India, Japan and Australia. Without mentioning China, the four countries said they are committed to a free and open Indo-Pacific region that is "undaunted by coercion."

France has actually been one of the most skeptical of the Western nations on U.S. efforts to limit some of China's actions.

French President Emmanuel Macron is of the opinion that while criticizing China over human rights abuses, the EU needs to work with the nation, particularly when it comes to climate change.

Speaking in February, Macron said: "A situation to join all together against China, this is a scenario of the highest possible conflictuality," Politico reported.

"This one, for me, is counterproductive," he said.

California, Uber and Lyft can find a way to compromise on drivers’ benefits 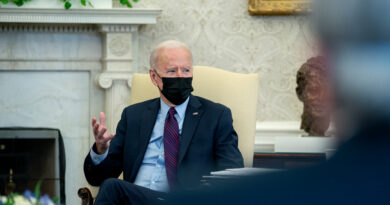 Biden Works to Leverage Senate Ties to Power His Agenda