LITTLE ROCK, Ark. — Former White House Press Secretary Sarah Sanders’ campaign on Thursday said she has raised nearly $5 million in her bid to be Arkansas’ next governor, breaking the record for quarterly fundraising in the state.

Sanders is running against Attorney General Leslie Rutledge in next year’s Republican primary to succeed two-term GOP Gov. Asa Hutchinson, who is barred by term limits from seeking reelection. Republican Lt. Gov. Tim Griffin dropped out of the governor’s race about two weeks after Sanders joined it and is now running for attorney general.

The daughter of former Arkansas Gov. Mike Huckabee, Sanders left the White House as former President Donald Trump’s chief spokeswoman in 2019. She launched her bid for governor in January with an online video that prominently featured the former president and echoed his rhetoric, promising to fight the “radical left” in the solidly red state. 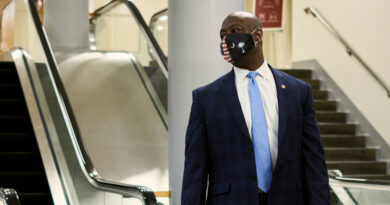 As Biden Moves to Expand Aid, the G.O.P. Lines Up in Opposition