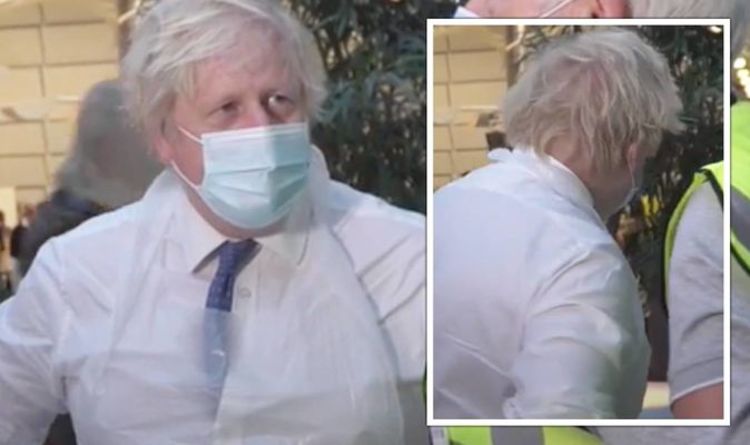 Johnson is heckled during visit to Ramsgate vaccination centre

Boris Johnson visited a vaccination centre in Ramsgate, Kent, where he spoke with volunteers about their work and how the booster programme was going. The Prime Minister spoke with one of the staff who said everyone was doing an “amazing” job with the Conservative leader thanking them for their efforts. But the moment was cut short after a man began yelling across the centre “Shame on you Boris Johnson” which caught the attention of the Prime Minister as he simply said “Good morning” before awkwardly returning back to his conversation.

As Mr Johnson turned his back on the heckle, he continued his conversation with a member of centre staff and told him their efforts were “fantastic”.

The Prime Minister visited the centre early morning on Thursday in a surprise visit.

Speaking at the centre, Mr Johnson said: “I think the vaccination centre in Ramsgate is amazing.

“It’s certainly one of the very best I’ve seen. But there are people up and down the country who are doing an incredible job.

“And I just thank Dr Ash and all his teams. The spirit of the volunteers here, the spirit of the doctors and nurses, the people who are preparing the jabs, the vaccinators themselves, it’s just fantastic dedication.

“And I would just say to everybody in the Kent and Medway area the capacity is here. There’s a huge jabs army of enthusiastic volunteers and doctors and nurses who are willing to get the jabs into your arms so come forward and get them.”

Mr Johnson also made reference to the local NHS recruitment drive, calling it the “golden age” of recruitment.

Several polls have now put Labour leader, Sir Keir Starmer, as the country’s choice for the next Prime Minister despite the Conservative’s comfortable double-digit lead earlier this year.

Politico puts Labour at 38 percent with the Conservatives trailing at 33 percent.

According to the Guardian and the Independent, Mr Johnson attended a party in May 2020 for 15 minutes despite the country being in lockdown.

Of the allegations, a No 10 spokesperson said: “In the summer months Downing Street staff regularly use the garden for some meetings.

“On May 15 2020 the Prime Minister held a series of meetings throughout the afternoon, including briefly with the then-Health and Care Secretary and his team in the garden following a press conference.

“The Prime Minister went to his residence shortly after 7pm. A small number of staff required to be in work remained in the Downing Street garden for part of the afternoon and evening.”

The Mirror also published a picture of Conservative staff, which included London mayoral hopeful Shaun Bailey, at a party during the lockdown.

A Scotland Yard spokesperson said: “In line with the Met’s policy, officers do not normally investigate breaches of Coronavirus Regulations when they are reported long after they are said to have taken place.

“However, if significant evidence suggesting a breach of the regulations becomes available, officers may review and consider it.”

The Department for Education confirmed it had held a gathering in its office to thank the staff for their hard work over the course of the pandemic and said no outsiders were involved.

The Sunday Mirror shared photographs of Mr Johnson at a virtual Downing Street quiz which the Government says was only a brief appearance to thank those attending.

Senior Conservative MP Sir Geoffrey Clifton-Brown warned Mr Johnson could face a leadership challenge in 2022 as many in the party grow disgruntled with his “self-inflicted wounds”.

President Trump says Turkey's invasion of Syria is 'not our problem'