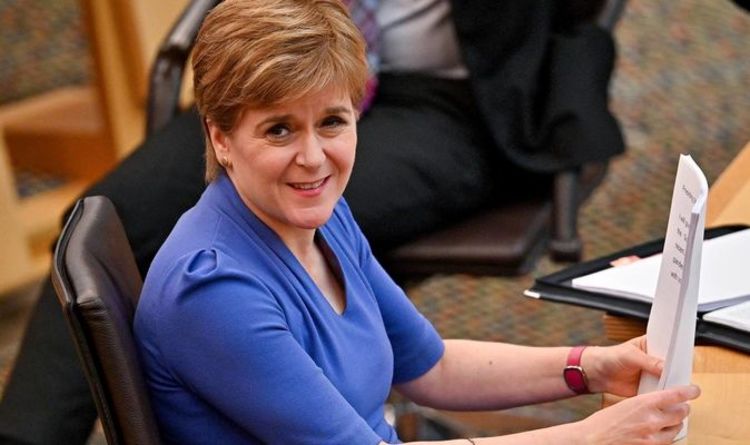 Professor of Politics at the University of Strathclyde Professor John Curtice appeared on the Today Programme as the SNP’s four-day virtual conference draws to a close. While First Minister Nicola Sturgeon is expected to close the event with a rallying cry for Scottish independence, Professor Curtice looked at the recent polls to see whether it would be in her interest to push ahead with one. The academic found support has slightly fallen since May with the yes vote teetering at 49 percent but stressed many voters would rather see independence “played long” with a vote coming within the next five years.

Ms Sturgeon and fellow SNP politicians have repeatedly stated they want to focus on fixing Scotland post-pandemic rather than push for independence.

Professor Curtice agreed the public opinion on independence played into the hands of Ms Sturgeon who seems to have addressed the shift in opinion.

It comes after Scottish Conservative leader Douglas Ross accused the SNP leader of focusing on independence during her Programme for Government speech where she discussed independence “four paragraphs in”.

Professor Curtice explained the findings on Radio 4 and said: “Whether or not there is a majority in favour of holding a referendum depends on the time scale that you ask about.

We’ve had four polls over the course of the weekend to mark the SNP and Alba conferences, on average they have put yes on 49 percent and no on 51 percent.

“The same four polls when they were conducted at or around the time of the Scottish primary election at the beginning of May, showed yes 50 percent, no 50 percent – so essentially no movement.”

Professor Curtice then pointed out support for independence at the same time last year was yes on 53 percent meaning backing has fallen.

He then looked at when should the referendum be held and said: “So far as the timing of a referendum is concerned, it’s pretty clear that there is a small majority for holding a referendum at some point during the course of the next five years.

John Swinney: Scotland to have more powers with own currency

“However what also seems to be clear is that there’s been something of a shift, certainly as compared to six months ago, among yes supporters away from holding a referendum, sooner rather than later.”

He noted a large portion of yes voters believe the referendum should not be held within the next 12 months with Professor Curtice calling it a “substantial gamble” if Ms Sturgeon went ahead with a referendum.

The polling analyst concluded many SNP supporters would rather it be played on “long rather than short” before stating the political party seems to have taken that on board by focussing on the pandemic first and foremost.

Ms Sturgeon is set to close the SNP conference on Monday and will shift her rhetoric to be one of “cooperation not confrontation” as she demands Westminster gives her the right to hold the independence referendum.

During her Programme for Government speech last week, Mr Ross accused Ms Sturgeon of putting independence as the “top priority” and demanded she and the Scottish Government addresses the drug deaths and NHS backlogs which are exceedingly high in the country.

Among the plans for Ms Sturgeon, the First Minister said tackling the climate emergency is a “moral and economic imperative” for the government.

She added: “We must act fast to decarbonise heat and transport – just as we have already done for electricity.”

Sky News reports the First Minister will blast the Westminster model and highlight the small amount of Scottish MPs in the House of Commons.

Sky News says the First Minister will tell the SNP virtual conference: “The United Kingdom is after all a voluntary union of nations.

“Until recently, no one seriously challenged the right of the people in Scotland to choose whether or not they wished to become independent.

“Frankly, it is not up to a Westminster government which has just six MPs in Scotland to decide our future without the consent of the people who live here.

“As an independent country, co-operation between Scotland and our friends across the rest of the UK will continue, but it will be on a better basis: Scotland will be an equal partner.”