WASHINGTON — Abortion rights are at risk at the Supreme Court, but the short-term threat may not come from extreme laws like the one passed by Alabama lawmakers on Tuesday.

The court led by Chief Justice John G. Roberts Jr. is more likely to chip away at the constitutional right to abortion established in 1973 in Roe v. Wade than to overturn it outright. It will have plenty of opportunities to do so.

As soon as Monday, the court could announce whether it will hear challenges to three different provisions of Indiana abortion laws. It will in the coming months almost certainly agree to hear a challenge to a Louisiana law that could reduce the number of abortion clinics in the state to one.

The Alabama law is a different kind of law, one that squarely conflicts with Roe. It would ban almost all abortions in the state, without exceptions for rape and incest, and subject abortion providers to harsh criminal penalties, but the Roberts court tends toward incrementalism, and is not likely to want to take on a direct confrontation with that precedent.

[It is far from clear when, or if, the measure will take effect. Read about the next steps.]

Nor in all likelihood will it have to.

Lower courts will almost certainly strike down the Alabama statute and other direct bans on abortion, like the ones that ban the procedure after doctors can detect what the measures call a “fetal heartbeat,” which happens at around six weeks of pregnancy. The lower courts will have little choice, as controlling Supreme Court precedents prohibit outright bans on abortion until the fetus is viable outside the womb, usually at about 24 weeks.

Since the Supreme Court controls its own docket, it can simply deny review after lower courts strike down laws squarely at odds with Roe. 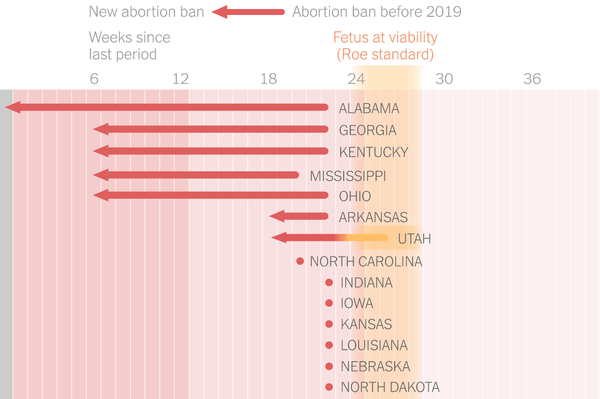 Abortion Bans Have Passed in 7 States This Year, Seeking to Challenge Roe

Alabama legislators on Tuesday voted to ban abortions in nearly all cases, making the state the seventh this year to pass abortion restrictions.

To be sure, recent changes on the court have given opponents of abortion rights fresh hope for a wholesale reconsideration of Roe. Justice Anthony M. Kennedy, who retired last year, had been a cautious supporter of abortion rights and was an author of the key opinion in 1992 in Planned Parenthood v. Casey, which both reaffirmed and modified the core of Roe, announcing that states may not impose “undue burdens” on abortion rights.

Justice Kennedy has been replaced by Justice Brett M. Kavanaugh, whose limited record as an appeals court judge suggests that he will be more skeptical about the right to abortion. But Justice Kavanaugh has also exhibited some caution in his first months on the court, and he may not be eager for an immediate confrontation with the basic issue when intermediate steps are available.

But there are three members of the court — Justice Clarence Thomas, Samuel A. Alito Jr. and Neil M. Gorsuch — who seem less patient. It takes only four votes to add a case to the court’s docket, meaning that either Chief Justice Roberts or Justice Kavanaugh could force the court to confront the ultimate question of the fate of a constitutional right to abortion when a case concerning the Alabama law or a similar one reaches the court.

Melissa Murray, a law professor at New York University, said much will turn on Chief Justice Roberts, who may have conflicting impulses.

“Recent departures and appointments, coupled with an increasing skepticism of established precedents, suggests the Supreme Court is more amenable than ever to overruling Roe,” she said. “The recent spate of restrictive abortion regulations reflects this new reality.”

“These laws are an obvious provocation — a clear attempt to take the question of Roe’s continued viability straight to the court,” Professor Murray said. “The real question is whether Chief Justice Roberts’s interest in preserving the court’s institutional legitimacy will outweigh the conservative interest in legislating abortion out of existence.”

The court’s liberal justices certainly seem nervous. On Monday, in a case overruling a precedent in a different area of the law, Justice Stephen G. Breyer’s dissent chastised the majority for acting rashly. Repeatedly citing the Casey decision, Justice Breyer said he feared for the future.

“Today’s decision can only cause one to wonder which cases the court will overrule next,” he wrote.

Richard W. Garnett, a law professor at Notre Dame, said the constitutional confrontation over the right to abortion sought by the sponsors of the Alabama law was unlikely to come to pass.

“It appears that the proposal’s supporters intend to create an opportunity for the current court to revisit its decisions creating that right,” he said. “However, it is not clear that the current justices who have expressed doubts about the correctness of decisions like Roe and Casey will want to take up a case that squarely presents the question whether these decisions should be overruled. Instead, they might well prefer to first consider less sweeping abortion regulations and to uphold them even under the current doctrine.”