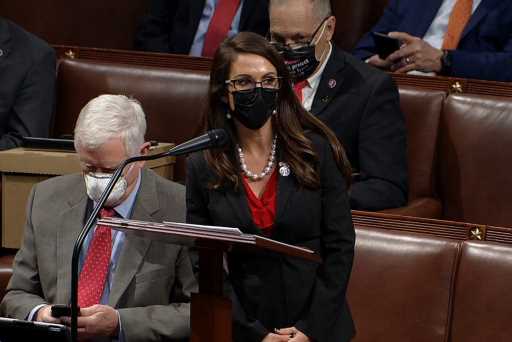 What’s The Spot? You’re reading an installment of our weekly politics newsletter. Sign up here to get it delivered straight in your inbox.

As sure as the wind blows (sometimes heavily in Colorado), modern politicians coordinate their arguments, vote along party lines and use social media to amplify their voices. We saw that in Washington, D.C., this week with the unprecedented second impeachment of a sitting president.

But we also saw 10 U.S. House Republicans break rank, signifying a move beyond simple calls for unity. None of those Republicans were from Colorado. Justin Wingerter kept tabs on the state’s delegation for how they voted not only on impeachment but also the effort to compel Vice President Mike Pence to use the 25th Amendment to remove President Donald Trump. He also followed Congresswoman Lauren Boebert’s contentious and much discussed first week in Washington, which culminated in her temporary inability to tweet.

Perhaps overshadowed by impeachment proceedings this week was the fact that the Colorado legislature began its 2021 session on Wednesday, swearing in new members and introducing seven new bills they’ll pass before taking a monthlong break. We gave you a cheat sheet for the 10 things you’ll need to know about this session.

Meanwhile, Saja Hindi reported on a discussion about the seemingly evergreen push to set up a public option for health insurance, and explains below how this year’s fight is setting up.

By Friday afternoon, lawmakers are expected to practically reverse a bill they passed during December’s special session that was meant to provide $4 million for businesses owned by people of color. Alex Burness explained why a lawsuit spurred immediate action.

And lest we forget the city of Denver, Conrad Swanson looked at the initial vote to let more people share the rent payments, as well as expanding where halfway homes can be located in the city. Below, he delves into how a group scored a win against the mayor’s office when it comes to public records on that very issue.

All that is to say change is afoot, as it is at The Denver Post, too. This week, I joined the politics staff as its editor, with the aim of bringing you stories that not only explain why politicians do what they do but more importantly how their decisions affect your life. Journalism’s mission, along with reporting the truth, is to serve the public. That’s why I want to know what you’re thinking about when it comes to Colorado’s political landscape — big themes or granular policies. Email me at [email protected] or submit those below.

To support the important journalism we do, you can become a Denver Post subscriber here.

Have a question about city, suburban, state or national politics? Submit it here and it’ll go straight to The Denver Post politics team.

Last month, the Colorado General Assembly approved $4 million in COVID relief for minority-owned businesses. Then a white barber sued the state, and this week lawmakers are passing a revised bill that will open the relief program to white people, too. The situation, one Black lawmaker told us, is “appalling.”

The 2021 Colorado legislative session just started, and the fight to create a public health insurance option is already shaping up to be a doozy.

Lawmakers attempted to pass a hybrid public health insurance option last year that would have provided those who purchase insurance on the individual market another choice, aiming to bring down costs and provide more competition.

But then the pandemic arrived, and lawmakers withdrew the bill, while vowing to bring it back in 2021.

Opening Day speeches in the legislature are generally for Democratic and Republican leaders to lay out their visions for the session, though Wednesday’s were more vague than usual due to the upcoming COVID-influenced break.

But Senate Minority Leader Chris Holbert made one thing clear in his speech: Senate Republicans don’t intend to back down on the public option fight (even if they’re outnumbered by Democrats in both chambers).

“It was just one year ago that those in the ruling party were labeling our hospitals as being greedy while pushing for a so-called ‘public option’ as if involving the government to an even greater extent in the delivery of health care would somehow make it more affordable or more available,” the Douglas County Republican said.

He also questioned whether hospitals would have been able to handle the increased caseloads during COVID had the public option been in place.

In an interview, Senate President Leroy Garcia said part of the problem is the term “public option” elicits strong emotions, and although he hasn’t seen the new bill, now is the time for a discussion about health care access and affordability.

“We have to do something to address this challenge, and I would encourage my colleagues, myself included … we should be willing to attack the challenge,” he said.

Backers of the “Colorado Option” say the pandemic has highlighted more clearly the need for such a model — particularly as more people face unemployment and in turn, issues with health care.

If passed, the public option wouldn’t go into effect right away nor would it look exactly like last year’s proposal, Avon Democratic Rep. Dylan Roberts said. Recovery efforts beyond the day-to-day pandemic response, however, should include such an option, Democratic Sen. Kerry Donovan of Vail contends.

The bill has not yet been introduced.

“I will say, as the senior member of the delegation, we really do work hard and work collectively, Democrats and Republicans,” Democratic Rep. Diana DeGette told the Colorado Chamber in fall 2019.

In most, but certainly not all, state congressional delegations — I’ve covered three full-time as a reporter — there is an unwritten and informal agreement that says you don’t publicly criticize another member of the delegation by name, with some exceptions around elections.

To the extent that any such agreement existed within the Colorado delegation, it has eroded in recent weeks, beginning Dec. 22, when Democratic Rep. Jason Crow criticized GOP Rep. Lauren Boebert on Twitter, accusing her of writing off Coloradans killed by COVID-19 as mere statistics.

Five days later, Crow again singled out a Boebert tweet, this time about the election: “You’ll be turning your back on your oath 3 days after taking it” and “you’re undermining our democracy.” On Jan. 1, he called her desire to carry a gun at the Capitol “a political stunt.” More recently, he told an Aurora Sentinel reporter that Boebert is a “fool” who “has no place in the Capitol.”

“Cute mansplaining, Congressman,” Boebert responded at one point on Twitter, her battlefield of choice.

Will any of this have real-world consequences? I doubt it. This is politics, thick skins abound. I expect the delegation will still come together a few times each year to push for pro-Colorado policies. Otherwise they’ll stay in their party corners and criticize the other side. It’s Congress.

Florence Sebern sued the administration last month in Denver District Court on behalf of Safe and Sound Denver after Hancock’s spokespeople denied her requests for several emails, attachments and other documents. She previously told The Denver Post she wanted to know why and where the proposals began.

One measure would allow up to five unrelated people to live together in the same home and the second would expand the number of places where homeless shelters and halfway homes could be located. City officials say the changes should help Denverites find more affordable housing and would treat group housing the same way they treat nursing homes and other similar organizations.

City officials denied Sebern’s request, citing deliberative privilege (meaning publicizing the documents would hinder candid internal discussions as they work to craft the proposals). They also cited attorney-client privilege in their denial, but to no avail.

Over the course of the lawsuit, Judge Michael J. Vallejos reviewed the more than 40 emails in question, and ruled Monday that neither argument held for the most part.

“Should they be disclosed, the Court is hard-pressed to understand how, the City, its employees, or future committee members would be stifled from robust discussion of proposed city projects because these documents do not contain candid or personal material,” Vallejos wrote Monday.

He added that just because an attorney happened to be on the email chain doesn’t automatically mean attorney-client privilege comes into play.

“The emails don’t reflect that the sender was either seeking legal advice, or that legal advice was returned,” he wrote.

A grand total of four pages qualify as protected under the deliberative privilege argument, so those documents can remain secret. The rest of Sebern’s request must be released within 21 days.

In a press release from Safe and Sound Denver, Sebern said she was grateful for the ruling and chastised Hancock’s office.

“It appears standard procedure in the Mayor’s office is to obscure their actions and dare residents to challenge in court,” Sebern said. “It’s an astounding attitude which forces taxpaying Denverites to expend their hard-earned money twice: once to pay the salaries of those who work for us, and then pay court costs when they are negligent.”

Forward this newsletter to your colleagues and encourage them to subscribe.

Trump’s Opposition to Mueller Testimony Poses a Test for Barr