Home » Transtasman talks: Managing the rise of China is becoming a defining issue 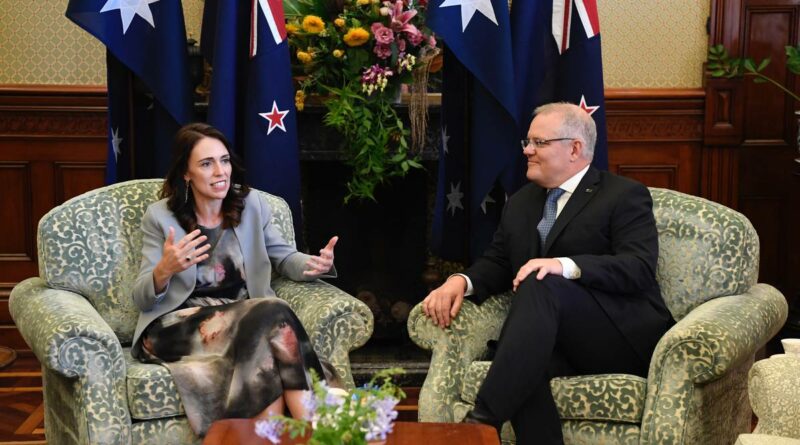 When Australia’s 60 Minutes crew was filming at New Zealand Parliament recently, it was very clear that Prime Minister Jacinda Ardern was unimpressed with their line of questioning during media scrums on her way to Question Time.

Their premise was that New Zealand had “gone soft on China”.

The show airs in Australia tomorrow night, the same day Ardern arrives in Queenstown for annual bilateral talks in which the China question will feature large.

And the respective management of the China relationship has become a defining issue in the transtasman relationship, says Robert Ayson, Professor of Strategic Studies at Victoria University.

“It’s partly because the management of the rise of China is really the central issue of the foreign policy of both countries,” says Ayson.

The television crew was dispatched after Foreign Minister Nanaia Mahuta explained publicly that New Zealand did not want Five Eyes intelligence alliance to be the first vehicle through which it would make statements on human rights abuses. It’s encounter with Ardern went like this:

60 Minutes: “Do you have to sometimes bite your tongue knowing the sensitivities and the potential economic ramifications of upsetting the regime in Beijing?” She was asked in a scrum on the way to the House. Ardern: “No.” 60 Minutes: “I think the issue deserves a little bit more than that.” Ardern: “I reject the premise of the question. The idea that we do anything other than stand up strongly for our views and our values and our independent foreign policy … I completely reject the notion that we have gone, quote, soft.” 60 Minutes: “Why, then, would you not stand shoulder to shoulder with your traditional allies in Five Eyes in condemning China? Ardern: “I would point to the fact that just in recent weeks this Parliament has moved a motion with our grave concerns around the human rights issues that we have seen reported out of Xinjiang. Other Parliaments have either voted down such motions or abstained on them.”

The significance of Ardern’s last answer was possibly lost on the Australians.

Some MPs in their own Parliament tried to get a motion passed condemning human rights abuses against the Uighur minority in Xinjiang as “genocide” as Parliaments in Canada, Britain and the US have done.

It was blocked in Canberra by Coalition and Labor MPs in the Senate.

Imagine that: Australia not standing with its allies in condemning China for genocide. Australia ended up with no motion passed.

New Zealand, on the other hand, did not use the word genocide but unanimously passed a motion which strongly condemned China, with MPs declaring they were “gravely concerned about the severe human rights abuses taking place against Uighurs and other ethnic and religious minorities in the Xinjiang Uighur Autonomous Region”.

New Zealand was blasted by China over the motion.

New Zealand has been blasted increasingly by China in the past two years, including when Ardern stood by Australia in condemning the despicable photoshopped Beijing propaganda of an Australian solider killing a baby, for example.

The New Zealand Government’s position on eschewing Five Eyes as a public diplomacy tool is backed by the more conservative Opposition National Party, which was very reluctant to criticise China when in government.

In Australia, the hardline on China is backed by the Labor Opposition. The hawkish Defence Minister Peter Dutton and his former senior public servant Mike Pezzullo recently talked up the prospect of war with China.

That allowed Labor to urge greater responsibility but no major shift.

Australia has always been more abrasive, as its aspirations as a middle power would suggest, and Prime Minister Scott Morrison is due to attend the G7 in June as a special guest of host Boris Johnson.

In the 15 months since Morrison and Ardern last held talks, Australia’s relationship with China has deteriorated badly. It was in lockstep with the United States in pointing the finger at China over Covid-19 failures. Trade reprisals by China have cost it at least $49 billion.

Australia has cancelled a Belt and Road project signed by the Victoria Government and is considering cancelling the 2015 lease of Darwin Port to a Chinese company. China has indefinitely suspended its strategic economic dialogue with Australia.

All Australian leaders these days are tough on China.

“The starting point for Australian politicians is that being strong on national security is a pre-requisite,” says Ayson.

“At times, being strong on national security has been defined in terms of how you deal with issues like migrants, asylum seekers. Now that is being much more defined as being tough on China.”

Partly that was related to the influence that China had tried to have on Australian institutions.

There are those who will always believe New Zealand is weak on China and will seize on anything to support that narrative, and Trade Minister Damien O’Connor played into their hands when early this term he advised Australia to show greater respect to China.

But Ardern’s comments to the China Business Council this month -that the differences with China are becoming harder to reconcile – have been noticed in Canberra and seen as a vast improvement and counterweight to that.

And Mahuta this week said New Zealand needed to be ready for the type of diplomatic and economic storm Australia is weathering.

The comment wasn’t exactly timed for the transtasman visit but Ayson says it will be welcomed for its effort to emphasise similarities.

“I think officials in both Canberra and Wellington are working hard to make sure that there isn’t this perception of this vast gulf between the two, that New Zealand is somehow celebrating the relative absence of China pressure and Australia is struggling with its.

“That’s not healthy for the transtasman relationship.”

It’s Official: September Democratic Debate Will Be One Night Only