WASHINGTON — For the American farmers whom President Trump counts on for support, the government money is flowing faster than ever.

Federal payments to farmers are projected to hit a record $46 billion this year as the White House funnels money to Mr. Trump’s rural base in the South and Midwest ahead of Election Day.

The gush of funds has accelerated in recent weeks as the president looks to help his core supporters who have been hit hard by the double whammy of his combative trade practices and the coronavirus pandemic. According to the American Farm Bureau, debt in the farm sector is projected to increase by 4 percent to a record $434 billion this year and farm bankruptcies have continued to rise across the country.

Farmers are not the only constituency benefiting from the president’s largess: He has promised $200 prescription drug cards to millions of seniors, approved $13 billion in aid to Puerto Rico, which could help his prospects in Florida, and he directed his Agriculture Department include letters signed by him in millions of food aid boxes that are being distributed to the poor. 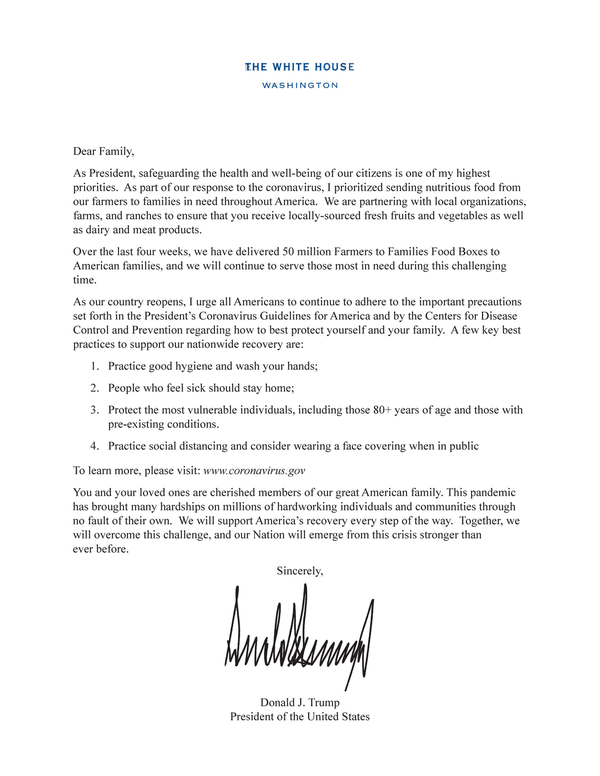 Millions of food aid boxes that are being distributed include letters bearing President Trump’s signature.

But few have gotten more help than the agriculture sector, which this year is expected to receive the largest government contribution to farm income since its previous record in 2005, according to the University of Missouri’s Food and Agricultural Policy Research Institute. The breadth of the payments means that government support will account for about 40 percent of total farm income this year. If not for those subsidies, U.S. farm income would be poised to decline in 2020.

“There are both economic and political motivations for these payments,” said Patrick Westhoff, who directs University of Missouri’s agriculture research center.

Last week, the Office of Special Counsel determined that Mr. Trump’s Agriculture secretary, Sonny Perdue, had improperly used his position to push the president’s re-election by promising more help for farmers. At an August event in North Carolina, Mr. Perdue violated ethics laws when he promoted Mr. Trump’s re-election during remarks about the Farmers to Families Food Box Program, saying: “That’s what’s going to continue to happen — four more years — if America gets out and votes for this man, Donald J. Trump.”

Mr. Perdue has been ordered to reimburse the government for the costs associated with his attendance at the event. In its response to the Office of Special Counsel, the Agriculture Department said that Mr. Perdue did not “encourage attendees to vote for a candidate or party or advocate for a partisan political group.”

More money for farmers will soon be on the way. Congress recently agreed to replenish an Agriculture Department fund that Mr. Trump has used to disburse nearly $30 billion to farmers at his discretion with tens of billions of additional dollars. The Trump administration negotiated with Democrats to ensure the money was included in a short-term bill to fund the federal government, with the White House agreeing to more funds for child nutritional assistance in exchange.

Farmers have been clobbered financially during the last two years, as Mr. Trump’s trade wars with China and Europe led to tariffs on American agricultural exports, including corn, soybeans, lobsters and peanuts. Then, this year, the pandemic interfered with global supply chains, and restaurant and hotel closures sapped demand. Farmers were forced to dump milk into manure pits and destroy millions of pounds of beans and cabbage.

“Nearly every major sector of the farm economy will have lower cash receipts this year compared to last year, and total cash receipts will be the lowest since 2010,” John Newton, the American Farm Bureau’s chief economist, wrote in a report on the state of the industry last month.

The desire to help struggling farmers is bipartisan, but Democrats and critics of the aid programs have argued that the money has been paid out unevenly by the Trump administration and with the intent of currying favor with a politically important constituency in swing states.

“For the first time in history, a president has repeatedly usurped congressional authority in order to personally dispense tens of billions of dollars in federal farm subsidy payments that would not otherwise have been paid,” said Ken Cook, president of Environmental Working Group, an advocacy organization that has been tracking the agriculture payments. “This is an authoritarian power grab used to buy political support from voters who are essential to his re-election.”

The president has only reinforced those concerns. At a September campaign rally in Wisconsin, a big farm state, Mr. Trump announced that an additional $13 billion in aid would soon be paid out through the Commodity Credit Corporation, a pot of money that the Trump administration had used to provide financial help to farmers suffering from retaliatory tariffs placed on American products.

“I’m proud to announce that I’m doing even more to support Wisconsin farmers,” Mr. Trump said, adding that some of that money would go to dairy, cranberry and ginseng farmers in the state that have been hurt by the coronavirus pandemic. 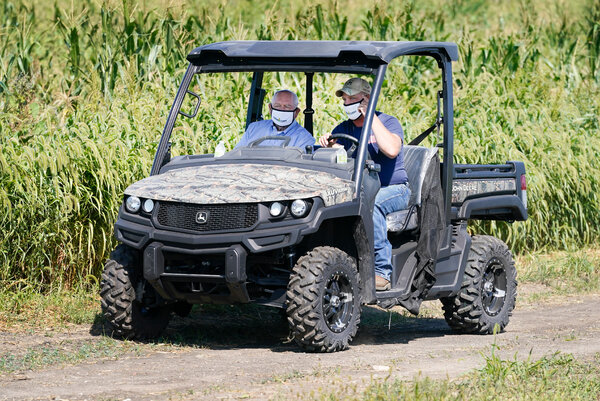 Not all farmers received special payouts during the last three years, but the Trump administration has recently moved to ensure that those in critical states do not miss out.

That includes the tobacco industry, which was prohibited from receiving any of the trade assistance because of legal restrictions against subsidizing the sector. In September, the Agriculture Department quietly shifted some of the funds that were allocated to its Commodity Credit Corporation fund — which legally cannot subsidize tobacco — into a separate account that can bankroll the crop. Tobacco farmers will receive up to $100 million in payments, easing some of the financial pain that has as been felt particularly hard in the battleground state of North Carolina.

The administration’s efforts have not erased the economic malaise and frustration among America’s farmers, who have seen sales fall and bankruptcies rise. The overall payouts have been large, but they have not always gone to the farmers who need them most. Critics, including both Democrat and Republican lawmakers, have argued that small farmers have missed out on the bulk of the bailout, while large and some foreign-owned farms have benefited.

A Government Accountability Office report in September added to suspicions among Democrats that $14.5 billion of farm aid from 2019 was being allocated with politics in mind. The report found that the bulk of the money went to big farms in the Midwest and southern states, including Mr. Perdue’s home state of Georgia.

“I do not believe that this president has been a true friend to farmers,” said Senator Debbie Stabenow of Michigan, the top Democrat on the Senate’s agriculture committee, who accused Mr. Trump of “subverting the law” in the way he had doled out farm aid.

In a statement, Mr. Perdue denied that the money was being deployed for political purposes.

“President Trump is once again demonstrating his commitment to ensure America’s farmers and ranchers remain in business to produce the food, fuel, and fiber America needs to thrive,” he said.

Mr. Trump appears to have kept much of his farm support intact. A September poll from DTN/Progressive Farmer/Zogby Analytics found that 53 percent of rural adults approved of his handling of the job, about 10 percentage points higher than his national approval rating.

It is not clear if that will be enough, however, given some bailout recipients remain unhappy with Mr. Trump’s trade policies.

Graham Boyd, the executive vice president of the Tobacco Growers Association of North Carolina, secured subsidies for his crops came after his group and lobbyists from other tobacco growing states demonstrated to the Agriculture Department that farmers were losing hundreds of millions of dollars per year in lost exports to China. North Carolina is America’s largest tobacco growing state and China was its biggest customer, but since 2018 Beijing has not bought American tobacco.

“I think all of agriculture, and tobacco, are frustrated with the ongoing trade dispute,” Mr. Boyd said in an interview. “It’s not resolved.”

“One hundred percent of these dollars will go to service debt,” he said.

To some small farmers, hearing about the big government subsidies without seeing meaningful payments firsthand only makes matters worse.

Joel Greeno, a Wisconsin farmer who switched from dairy to raising cattle, said that despite the big headline aid numbers it was a myth that the Trump administration had really helped small farms stay afloat. He said that most of it is going to rich landowners and corporate agriculture companies.

“Even though society believes that these programs that help farmers, the money very rarely gets to farmers,” said Mr. Greeno, who is also president of the Family Farm Defenders organization. “Rural America is not seeing that money because it’s not getting here.”

President Trump will hold a rally in Florida and Joe Biden will campaign in Ohio as the confirmation hearings for Judge Amy Coney Barrett get underway. Read live updates.

Biden-Harris ticket marks shift left on immigration: How will it impact American workers?