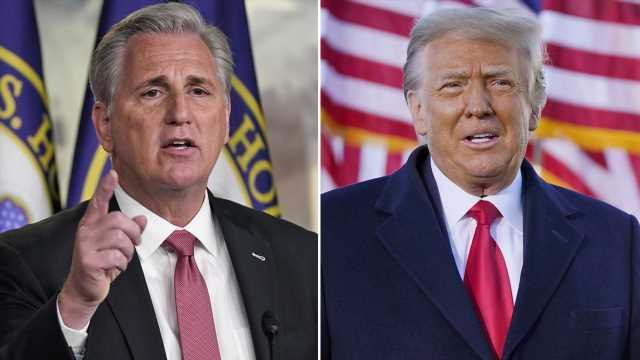 Del. Stacey Plaskett said she is filled with “glee” at the prospect of questioning House Minority Leader Kevin McCarthy, R-Calif., regarding a phone call between him and former President Donald Trump during the Capitol riot in January.

The opportunity may come soon, with House Speaker Nancy Pelosi, D-Calif., announcing on Monday that Congress will establish an independent commission to investigate the causes of the Jan. 6 attack on the U.S. Capitol by right-wing extremists and supporters of Trump.

“The thought of cross-examining Kevin McCarthy just filled my heart with glee,” Plaskett, a Democrat representing the Virgin Islands who served as a House impeachment manager during Trump’s second trial, said in an interview on MSNBC Monday.

Plaskett’s comments come after the Senate voted to acquit Trump in his second impeachment trial without calling additional witnesses.

The decision was made after Trump’s legal team agreed to allow a damaging statement from Rep. Jaime Herrera Beutler, R-Wash., into the record that describes a phone call Trump had with McCarthy in the midst of the Capitol riot.

GRAHAM WEIGHS IN ON MCCONNELL-TRUMP FEUD, SAYS HE’S ‘MORE WORRIED’ ABOUT 2022 THAN EVER

Beutler’s account referenced a call where Trump disregarded McCarthy’s pleas to call off the riot that was underway and instead told the House minority leader that the mob was “more upset” about the election than McCarthy was.

“When McCarthy finally reached the president on January 6 and asked him to publicly and forcefully call off the riot, the president initially repeated the falsehood that it was antifa that had breached the Capitol,” Beutler said in a statement that was entered into the official impeachment record.

House impeachment managers ultimately backed down on their original intention of deposing Beautler about her contemporaneous notes that she made when McCarthy relayed the details of the tense call that took place in the midst of the insurrection after a deal was struck with Trump attorneys.

Beutler was one of 10 Republicans who voted to impeach Trump in the House.

McCarthy himself has remained largely silent about the phone call but said he is supportive of an independent committee to investigate the events of that day, which left five people – including a Capitol police officer – dead.

“Republicans put forward a proposal for a fact-finding commission over one month ago,” McCarthy told Fox News in a statement. “It is our responsibility to understand the security and intelligence breakdowns that led to the riots on January 6 so that we can better protect this institution and the men and women working inside it. A commission should follow the guidance of Tom Kean and Lee Hamilton to be ‘both independent and bipartisan,’ and to preserve that integrity it must be evenly split between both parties.”

A spokesperson for Plaskett did not provide Fox News with a comment at the time of publication.

Gutfeld on Democrats delaying COVID relief to win an election