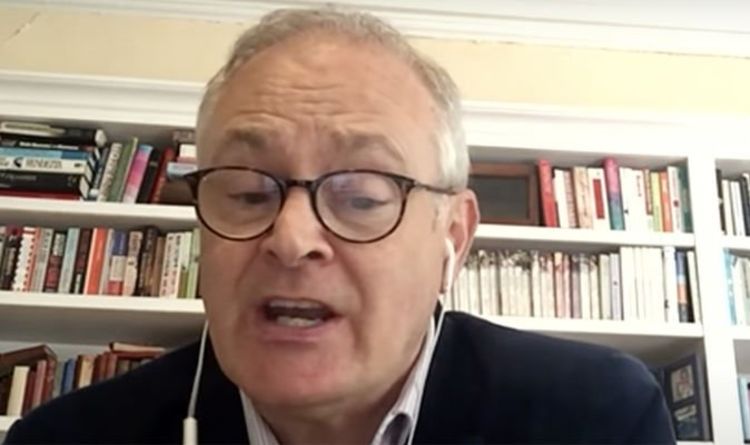 The European Commission backed down earlier this week after returning to the negotiation table with the UK. The Commission put forward a range of proposals aimed at cutting the red tape the arrangements have imposed on moving goods from Great Britain to the region on Wednesday. Former special Brexit advisor Stewart Jackson told GB News that the UK was outmanoeuvring Brussels because the EU was overwhelmed with crises.

He said that the EU was facing problems on multiple fronts, from tensions with its own member-states to a slowing economy.

Mr Jackson suggested that the EU will be “forced to concede” even more to the UK.

The former MP and special advisor said: “The big issue is that the EU is at a juncture where it is struggling.

“It is struggling with its own members, with rule of law issues with Poland and Hungary.”

Mr Jackson added: “It is struggling with immigration issues. It has a demographic time bomb, it is slowing down.

“As a proportion of world trade, it is reducing year on year. And it doesn’t have the stomach for a fight with the fifth biggest economy on its doorstep.

“So they have been forced to concede and come to the negotiation table.”

He said that the recent proposals to cut red tape in Northern Ireland were previously described by hardcore Remainers and officials in Brussels as “magical thinking”.

GB News host Tom Harwood said: “When they said all of this was impossible two years ago, they were just playing games, weren’t they?”

Mr Jackson responded: “The EU called these proposals magical thinking – but now they are now looking at that.

“We should applaud the efforts from the EU to reform the protocol, but I don’t think they have gone far enough. Frost needs to continue to be tough in the negotiations.”

The plan proposed by Brussels did not address a key UK demand – the removal of the European Court of Justice’s oversight function in the operation of the protocol.

Mr Jackson urged Lord Frost to continue the EU on scraping the ECJ’s role in the protocol.

Speaking on Friday, Lord Frost said the EU had made encouraging moves towards resolving the dispute over the Protocol – but insisted more was needed.

Prior to a meeting with European Commissioner Maros Sefcovic in Brussels, he explained: “I think the EU has definitely made an effort in pushing beyond where they typically go in these areas and we’re quite encouraged by that.

“But obviously there is still quite a big gap.

“And that’s what we’ve got to work through today and in the future.”