After much hustle and bustle surrounding the Binance system upgrade which led to the delay in the resumption of trading and withdrawals, Binance has finally come up with a time to resume trading.

“Binance has completed its system upgrade and we will resume all trading activity at 2:45 PM (UTC). From now until the commencement of trading, users will be able to cancel orders, process deposits, withdrawals, and use all other account related functions. Thanks for your support!” 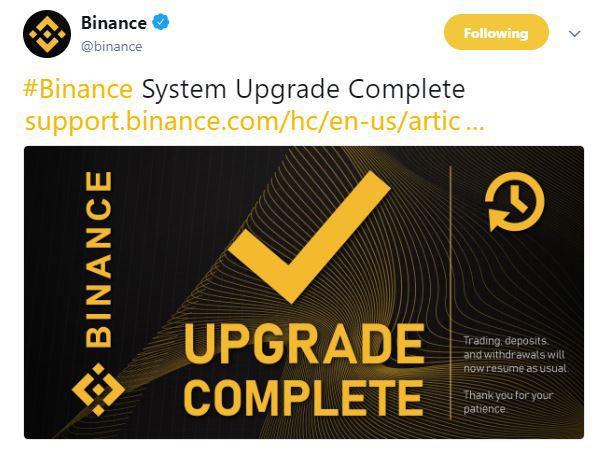 Yesterday, Binance had warned its users about the system upgrade, as the exchange announced:

“#Binance has commenced the scheduled system upgrade. The upgrade will take approximately 4 hours. Withdrawals and trading will be suspended during this period. We apologize for any inconvenience caused and thank you for your patience.”

CZ the co-founder of Binance had tweeted:

“1 month in crypto is like a year in traditional industries. During a system upgrade, every second is like a year. Sorry that it took way longer than the test run, with the same data…”

After constant updates about Binance resuming trading, the team kept facing some technical glitch and the trading platform was still under development. However, after a long 6-8 hours, Binance announced that the panel is up and is working but post this, there was no update from the team.

In January, trading exchanges Kraken also encountered an accidental delay during their system upgrade which resulted in the system being down for more than 48 hours before reopening the trading activity.

Cryptonaut, a crypto investor and a Twitter user commented:

“Still down ? 500 Sorry, this page could not be displayed”

“wtf now you just crashed the market, thanks binance”

“You should give more advanced notice. This spontaneous upgrade cost me hundreds of dollars, and it could have been much worse.”