Ethereum is preparing for EIP-1559.

Launching as part of the upcoming London hardfork, EIP-1559 is Ethereum’s biggest update since the gas cost changes implemented in the Berlin hardfork in April. The upgrade will change the first-price auction fee mechanism to a new base fee model with an additional miner tip.

Currently, all Ethereum users place bids to include their transactions in new blocks. The amount users need to pay can fluctuate significantly during periods of high demand. Ethereum wallet providers like MetaMask analyze this demand and offer varying fee options, with confirmation times sometimes lasting up to 12 hours or longer. Nonetheless, even a long wait does not provide a guarantee of the transaction being included in a block.

EIP-1559 aims to eliminate this uncertainty by calculating the base fee for a block beforehand based on the level of congestion. The other significant improvement in EIP-1559 is the introduction of variable block sizes with a higher gas limit of 25 million units, double the current limit of 12.5 million.

EIP-1559 will implement a base fee depending on the gas limit and demand, calculated as the market-clearing price. The protocol will dynamically set the block’s gas limit based on these variables and adjust the fees accordingly. Then, instead of passing the fee to the miner, the ETH paid in the base fee will get burned. The user will have an option to send a tip to the miner.

The network will typically target a 12.5 million gas limit, and the base fee will increase or decrease upon deviation from the 50% mark. Ethereum will support a higher gas limit above 12.5 million for short time intervals only.

Users will have a choice of either including their transaction for the given base fee or waiting for a cheaper block. One big advantage to EIP-1559 is that it should save users from having to engage in a guessing game for confirmation of transactions. The variable block size proposed in the upgrade, meanwhile, will help cushion sudden demand surges without a sudden increase in fees.

Exorbitant gas fees and long wait times have negatively impacted Ethereum’s user experience, and at times the network has been unusable for retail investors with less capital. In the last three years, the total gas used in a day has been between 60,000 to 80,000 units daily, with occasional spikes on some days. For instance, gas fees surged from below 50 gwei to 600 gwei Tuesday as Mila Kunis launched her Stoner Cats NFT collection.

A common misconception of EIP-1559 is that the update is a long-term scalability solution. It’s expected that the update will be ineffective in reducing fees, with miners likely to receive tips during periods of high demand.

The Effect on ETH Inflation and Miners’ Income

While EIP-1559 has advantages for everyday Ethereum users and ETH holders, it negatively impacts miners. This is because it directly affects miners’ earnings by burning a portion of the fee.

Moreover, there is a risk involved with the proposal becoming ineffective if the miner tips become significantly larger than the base fees. In this instance, the auction market for a larger tip will resemble the current first-price auction fee mechanism; it would defeat EIP-1559’s purpose. This is most likely to be a problem during periods of high demand for block space, such as during major NFT drops or price crashes.

Ethereum’s current annual inflation rate is above 4%. It’s decreasing at a slow rate as the increasing supply is diluting new block rewards. After EIP-1559 launches, the network will burn ETH, essentially working against the block rewards of 2 ETH per block. The question remains as to whether the fee burn will make ETH deflationary.

According to a report by Coinmetrics, the expected rate of inflation is largely unpredictable.

During busy periods on the Ethereum network—like in March and April of this year—the annual inflation rate in the EIP-1559 module would have fallen below 1%.

Still, the update won’t necessarily have an immediate deflationary effect. If roughly 70% of the base fee is burned with the rest paid to miners in tips, Coinmetrics estimates that the drop in inflation will be less than many have forecasted.

Since the crypto market crashed in May, the amount earned in fees has significantly dropped, raising the inflation rate estimate to roughly 3.5%—only 0.5% less than the current rate. 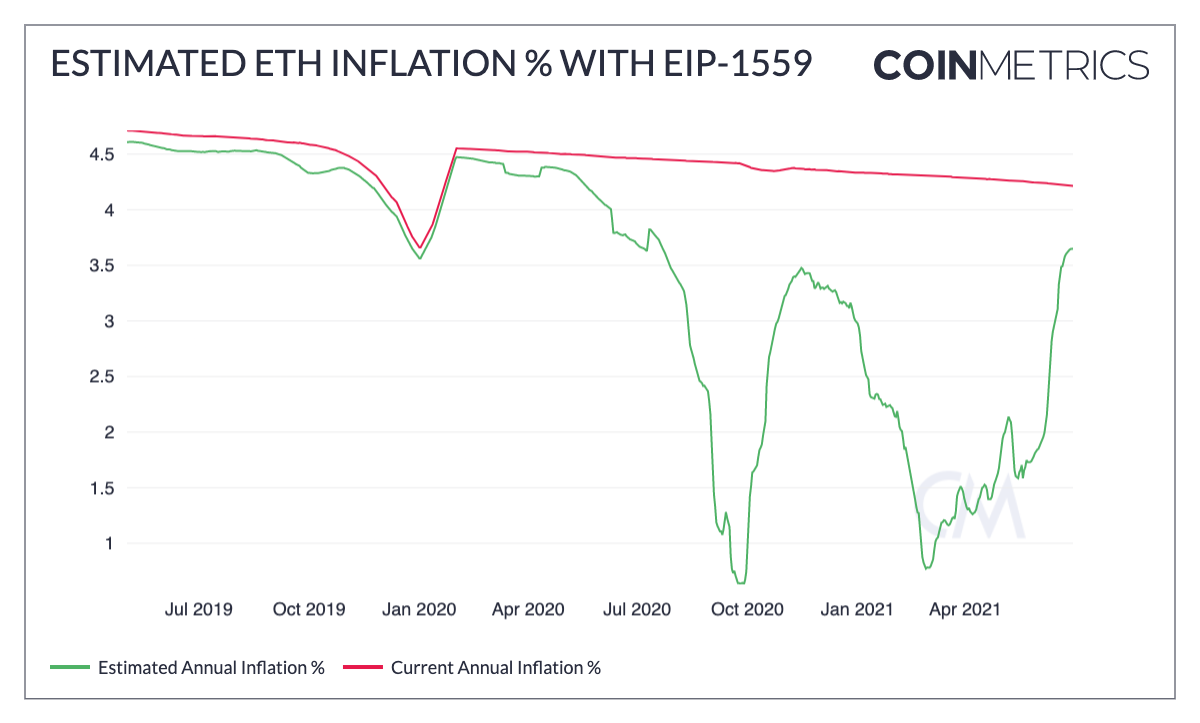 After EIP-1559, the transaction fees earnings for miners are expected to decrease by 70%, while the block rewards will stay at 2 ETH. Overall, according to the present percentage earnings in fees, the net revenue loss to miners is expected to be between 10 and 20%.

The 10 to 20% estimate is lower than the previous predictions of a 30 to 50% cut in miners’ incomes. Nonetheless, these values hold true during periods of peak demand, when miners make up to 50% of their revenue in transaction fees.

EIP-1559 also marks a transition from Ethereum’s Proof-of-Work consensus mechanism as it handles most of the responsibilities of the miners.

It will introduce Proof-of-Burn in Ethereum along with the existing Proof-of-Work mechanism. This essentially creates value for ETH holders by making the asset more scarce instead of passing it onto miners.

The network will eventually move to Proof-of-Stake as part of the next phase of Ethereum 2.0, at which point all of the block rewards will go to ETH stakers. Ethereum’s Beacon Chain was deployed in December 2020, with over $14.5 billion in ETH currently deposited to the staking contract.

EIP-1559 marks an important milestone in Ethereum’s all-around development in becoming the base layer for financial applications by introducing predictability and the ability to absorb sudden surges in demand. It will also make ETH more scarce, which explains why it’s gained so much popularity in the Ethereum community. The London hardfork is slated to go live at block height 12,965,000, estimated to arrive between Aug. 3 and 5.

Humans may be Able to Regrow Teeth in the Future