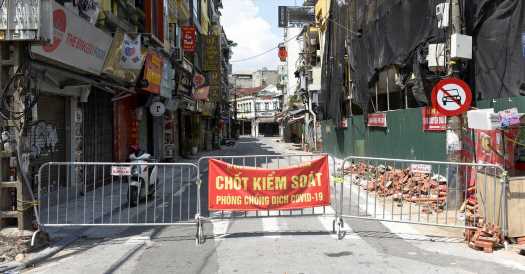 A man who returned to his home in southern Vietnam after traveling to Ho Chi Minh City for work received a five-year prison sentence on Tuesday for spreading the coronavirus, state news media reported.

The man, Le Van Tri, 28, was convicted of “spreading dangerous infectious diseases” to eight people, one of whom died from virus complications, the state-controlled newspaper Thanh Nien said. His sentence for failing to comply with Covid-19 quarantine restrictions also included a fine of 20 million dong, around $880.

Mr. Tri returned to his home in Ca Mau Province by motorcycle in July after a surge in virus cases in Vietnam, which had prompted a tightening of restrictions in Ho Chi Minh City, the country’s largest.

He failed to comply with instructions from health care personnel at travel checkpoints to self-quarantine for 21 days and report his travel history on forms, the Thanh Nien report said. Among the people he spread the virus to were members of his family, it said.

The verdict came after a one-day trial at the People’s Court of Ca Mau.

Vietnam long prided itself on containing the virus, but has struggled to maintain that success since a new wave of infections emerged in late spring. It had a daily average of 12,471 new cases as of Tuesday, according to data compiled by the Center for Systems Science and Engineering at Johns Hopkins University, and had fully vaccinated just under 3 percent of its population, according to the Our World in Data Project at Oxford University.

Hezbollah and Israel: A timeline of cross-border attacks