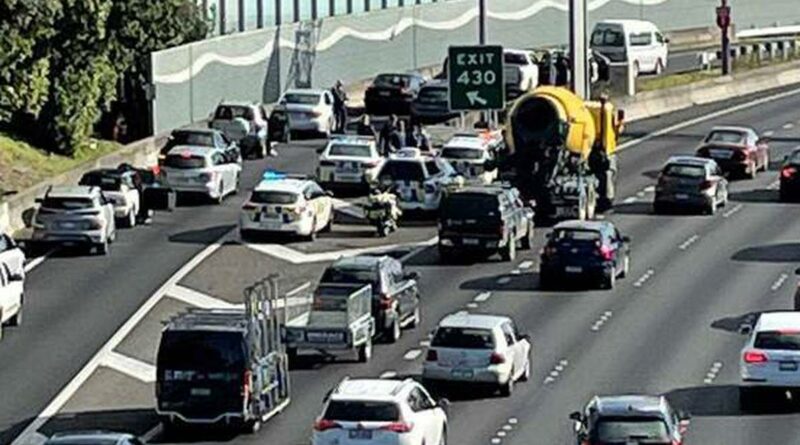 A man on a test drive has described the dramatic moment a van careered into a car on an Auckland motorway offramp before the van driver tried to carjack a terrified woman’s vehicle.

Auckland man Ali, who doesn’t want his surname used, was in the back seat of his car as another man from Hamilton was test driving it yesterday.

After passing an officer holding road spikes, a white van overtook Ali’s car in what he believed was a “dangerous fashion” on the Southern Motorway’s Khyber Pass off-ramp.

Ali said in his opinion: “The moment he overtook us, we knew something was wrong. The way that he was driving, we knew he was going to hit somebody at some point because his right front tire was flat and he was going fast.”

The van then swerved into a Toyota Corolla, bringing both vehicles to a stop, Ali said.

“I was bit surprised. I wasn’t expecting to see this kind of behaviour in New Zealand. It felt like it might’ve been in America or on the news.”

The van driver tried to get into the Toyota Corolla while a woman escaped from the car, clutching a handbag, Ali said.

Several police officers arrived at the scene and pulled the man out of the Corolla.

A member of the public then tackled the man to the ground, Ali said.

Video footage of the incident shows a group of police officers trying to restrain the man.

Police used a taser on the man, but he stood up again, Ali said.

The woman in the Corolla was terrified, he said.

Ali, who had previously worked in the security industry, told her it “was going to be okay”.

Once the man had been arrested, an officer ran to the motorist who had earlier tackled the offender and gave him a big handshake and a hug, Ali said.

“[The officer] said, ‘Thank you so much for helping us’.”

A police spokesperson said officers located a vehicle in Kumeu linked to a man being sought by police just before 10am on Saturday.

A man was located at a Kumeu address a short time later and fled on foot, before allegedly stealing a vehicle from a nearby property.

The vehicle then came to a stop on the Khyber Pass off-ramp, where police said the suspect attempted to steal a vehicle from a member of the public before being taken into custody.

No members of the public were injured.